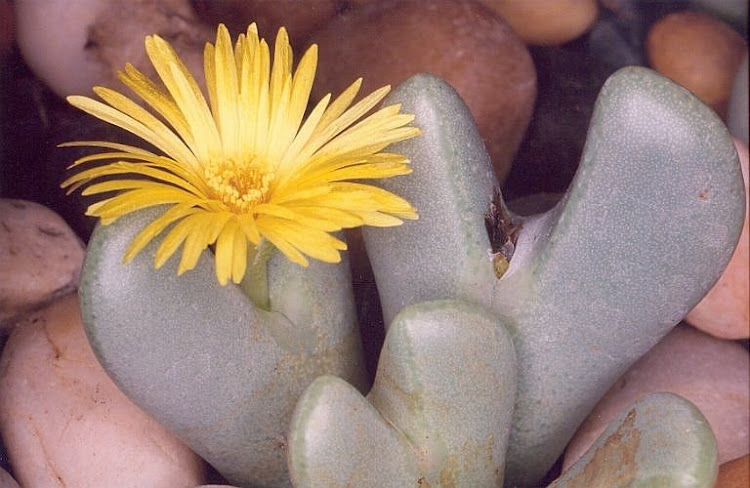 Tiny alien-looking plants attracting poachers from around the world to SA's driest regions, would stand little chance of survival were it not for dedicated law enforcement officers.

This week, officials from the police and CapeNature secured the convictions and sentencing of two South Korean men for stealing thousands of conophytum plants.

Byungsu Kim and Young IL Sunwoo were each fined R2.5m and given a six-year suspended prison sentence at the Cape Town regional court on Tuesday.

And while one of the men has been declared persona non-grata the other has started an extradition process to the US, where he is wanted for poaching succulents in California.

“It’s a good sentence and it sends out the right message to these guys. If you get caught you are going to kak en betaal (cough up and pay)," said a law enforcement source.

Western Cape police spokesperson Mihlali Majikela said in addition to their fines, the two men had had R2.5m confiscated.

“It will be divided between the criminal assets recovery account, the Western Cape Nature Conservation Board and the SA Biodiversity Institute,” he said.

The South Koreans poached more than 60,000 conophytum plants, which are succulents endemic to the west coast of SA and southern Namibia.

The law enforcement source said that it was the fourth conviction of conophytum poachers in the last five months. The plants are prized by collectors in Asia, but the poachers also included two Czech citizens.

The source said he would prefer not to say what the poached plants were worth, “because what we’ve seen happen is as soon as you give a value to the plants then suddenly everyone thinks, 'oh I don’t have a job let me go and steal these plants and make quick money'," said the source.

“One of the entities involved in law enforcement previously gave a value to these plants which was light years off, and the result was that these people suddenly started walking around and offering a certain amount of money per plant.”

The source said despite the good success rate against wildlife poachers in the Karoo area, culprits were difficult to catch.

Typically, two poachers would pick a piece of veld or a farm and strip it of all its plants, a process dubbed reaping.

“Some of the plants [the Koreans] were caught with are a minimum of 200 years old, some of them were 350 years old. They were here when Jan van Riebeeck landed,” the source said.

Overseas collectors paid a premium for plants which had been shaped by nature. "What people want are these big plants which you find in nature which have been formed by years of hardship and animals which ate them and grew in cliffs,” said the source.

“They have unique forms, unique structures, and you can’t replicate that in a nursery, and everyone wants that.”

According to the source, the suspects arrived on a holiday visa, rented a car and drove to the middle of the Richtersveld or the Knersvlakte, some of SA's most isolated regions. They packaged and couriered the plants home.

“Another way is they will buy the same species which they’ve collected from a nursery, and then they’ll get a receipt from the nursery and use the nursery to apply for an export permit. Then they export those using the nursery’s export permit,” said the source.

Attempts will be made to rehabilitate the Koreans' poached plants. “They are relatively hardy. If you treat them right they will survive. The problem is you don’t know where they dug them out,” said the source.

“They throw all the species into one bucket. If we know exactly where the plants come from you can go and return them, but you can’t do that because you don’t know where they were collected.”

Rhino poaching is on the decline‚ but other species are under threat‚ like elephant‚ the quirky pangolin and even the rare cycad plant.
News
4 years ago

According to the source, the wildlife trade is synonymous with organised crime and pound for pound, plants could be worth more than drugs.

“In fact, it's much worse. Drugs are something people produce, you’re not removing it from nature.

“With plants, when you remove certain things in large quantities they’re gone forever. You’ll never get them back.”

Joburg flower show sets sustainability standard - and for gardens too

Climate change is on everyone's lips - especially since Greta Thunberg's recent speech at the UN - and rightfully so. We have seen the global ...
Lifestyle
2 years ago

This six-day hiking trail from Steytlerville to Kareedouw in the Eastern Cape gives walkers and horse-riders the chance to explore seven of SA's nine ...
Lifestyle
3 years ago

Forty-eight suspected poachers were arrested and 142kg of abalone was confiscated when Garden Route National Park rangers and police swooped on ...
News
2 years ago