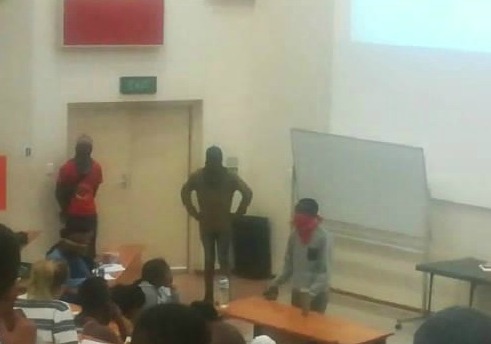 Armed with bricks, a group of masked students spent most of Tuesday morning chasing Nelson Mandela University (NMU) students from lectures and setting off fire alarms.

Shortly after the disruptions to the morning classes on Tuesday, seven students were arrested for damage to infrastructure and contravening a court interdict. Three were released later.

Asked how many students had been involved in the intimidation and how many classes had been affected, NMU spokesperson Zandile Mbabela said accurate figures were not yet available.

Nelson Mandela University’s management said university activities will resume on Tuesday, but student leaders insist that while students have nowhere ...
News
1 year ago

However, it has been determined that masked protesters entered at least four classes and students were chased out of the library.

In a video seen by The Herald, a student with a mask covering his face holds up a rock while addressing a group of students in a lecture hall.

“We are here to fetch you, to ask you to join us to shut down the institution until all students have accommodation and are registered,” he said.

Though some students applauded his speech, others said they had been terrified.

The disruptions occurred despite the university reaching an agreement with the Student Representative Council (SRC) on a number of issues relating to registration and funding on Monday afternoon.

Those issues sparked the protest that saw the university shut down on Monday.

A third-year humanities student, who did not want to be named, said the militancy of the protesters had terrified students who just wanted to learn.

He said students had been informed by the university that they could return to lectures on Tuesday because an agreement had been reached with the SRC.

“I arrived at the campus at 7.30am for my first lecture, which was supposed to commence at 7.45am.

“We then received messages that there may be a possible protest,” he said.

Students from the uMfolozi TVET College Richtek Campus in Richards Bay, northern KwaZulu-Natal, took to the streets on Monday.
News
1 year ago

At about 9am, four protesters armed with stones disrupted his lecture and threatened students.

“They were very scary, they unnecessarily instil fear through intimidation,” he said.

“My main problem now is do I go to school tomorrow, because they [university management] say it’s OK, but [yesterday] it wasn’t.

“The only people who have kept their promise so far are the protesters.

“They have said they will disrupt until everyone is registered.

“So right now I believe what they say and not the university.

“The university has failed to guarantee my safety — I don’t feel safe.”

The student said the university was not doing enough to address their concerns and students were at risk because there was not enough security on campus.

“They [university] sent an e-mail reporting the arrests as if it’s something to be proud of, but no information on who was arrested and for what.”

A lecturer, who did not want to be named because she is not authorised to speak to the media, said the students who disrupted classes had not been overly aggressive, but the first-year students, in particular, had been afraid as many had only been on campus for a few weeks. 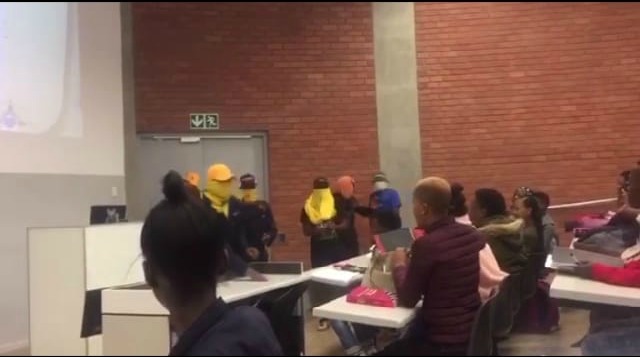 Daso and Sasco have denied involvement in the protests, but EFF Student Command said some of its members were involved.
Image: SUPPLIED

A student in the health science faculty said: “They [protesters] walked in groups, covered their faces and chased out students who are studying. They are difficult to avoid.”

He said the university’s response to the students’  grievances was “vague and with no confirmation that all the students will be accommodated or registered”.

SA Students Congress' (Sasco) chair Axole Xotyeni said it had also not been involved in the intimidation.

“As much as we care about the issues the students are facing, we also promote academic excellence,” he said.

“We don’t want to put the students at risk of being arrested.”

When the EFF Student Command was asked about the disruptions, it initially denied the masked students were part of its ranks, but conceded later that some were.

UKZN: It’s terrible seeing a varsity die, especially as it was preventable

After this week, the University of KwaZulu-Natal has joined the ranks of the chronically dysfunctional universities of South Africa. In fact, it is ...
Ideas
1 year ago

A member of the EFF students’ wing, who would not give his name, said: “What the comrades were doing today was a demonstration of ubuntu.

“We cannot have students continuing studying while others are not registered and don’t have accommodation [and are] forced to sleep on basements.

He said his organisation had been devastated by the arrest of the students.

“Our members were wrongfully arrested as they were practising their democratic right to protest.”

Mbabela said the disruptions affected “some classes, mainly on two of the university’s seven campuses”.

“This was in direct violation of the standing interdict, which was read out and enforced yesterday,” she said, adding that the disruptions would not be tolerated.

“Management is committed to following through with the evidence gathered to ensure the necessary disciplinary action is taken against the apprehended students and those who were disrupting classes,” she said.

The university has deployed extra security to ensure lectures are not disrupted again.

“The university acknowledges the anxieties among staff and students, and is actively pursuing measures to normalise operations,” Mbabela said.

Universities South Africa (USAF) says individual institutions cannot write off students' historical debt, as demanded, and there cannot be a solution ...
News
1 year ago
Next Article