Ambulance among three vehicles torched in 24 hours of PE protests 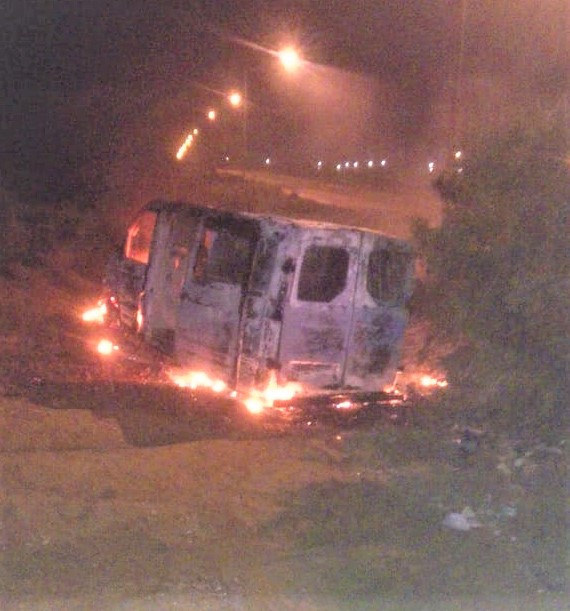 The ambulance torched by protesters on Wednesday night in Booysen Park.
Image: SUPPLIED

Three vehicles, including a state ambulance, have been torched and another stoned by protesters in Port Elizabeth's northern areas in the past 24 hours.

Police have warned that William Slammert Drive and the end of Stanford Road, near Vastrap in Booysen Park, are closed.

The protests are linked to ongoing disputes regarding service delivery in the area.

According to police, the road had been blocked with rubble and stones when protesters forced the security vehicle to stop.

Officials said the driver was told to run away before protesters torched his vehicle.

This comes after a metro EMS ambulance and a courier delivery vehicle were torched near Qunu in Booysen Park on Wednesday night.

Police spokesperson Col Priscilla Naidu said the ambulance, which was en route to a medical call-out, was ambushed and torched at about 8pm on Wednesday.

“About six suspects were hiding in the nearby bushes when a petrol bomb-type device was thrown at the ambulance.

“The crew abandoned the vehicle and fortunately, a second ambulance was nearby to assist,” Naidu  said.

“As the second ambulance approached, the suspects pelted it with stones.”

An hour later, a courier vehicle was also stoned, before being hijacked in nearby William Slabbert Drive.

Protestors in the area stripped the ambulance before setting it alight last night. Police have also recovered metal parts from the vechicle in the houses of a few residents. #sabcnews pic.twitter.com/PmXnGgQoxG

We are at the scene where a ambulance vehicle was petrol bombed and another pelted with stones at Vastrap in Booysen's Park in Port Elizabeth. An emergency rescue AA vehicle has also been stoned this morning while recovering the burnt out ambulance. #sabcnews pic.twitter.com/GbsGkNrNbV

Earlier this week, five people were arrested for public violence linked to the protest.

Armed with bricks, a group of masked students spent most of Tuesday morning chasing Nelson Mandela University (NMU) students from lectures and ...
News
1 year ago

Protests and 'threats' force Eskom to suspend work in Butterworth

Eskom in the Eastern Cape has suspended operations in and around Butterworth after employees were threatened and insulted for working while the town ...
News
1 year ago