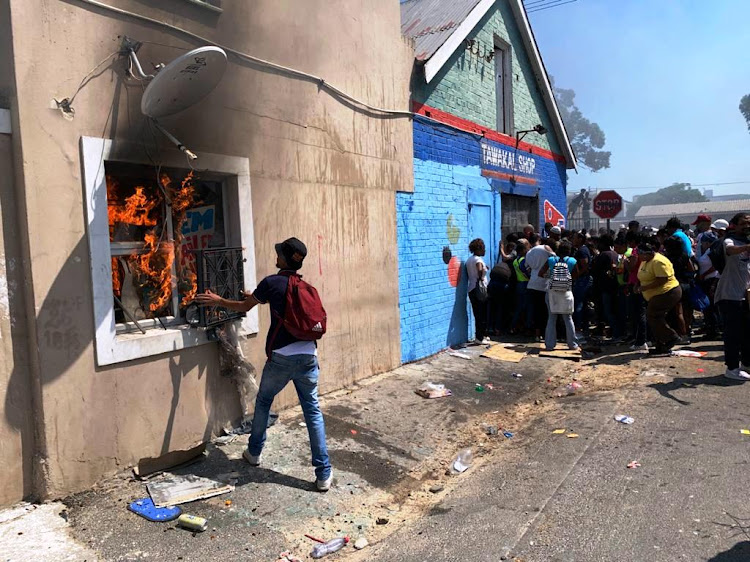 A building near Goodwood magistrate's court burns as a crowd gathers outside a shop that was later looted on February 21 2020.
Image: Esa Alexander

A rioting crowd set fire to three buildings on Friday after the court appearance of a man accused of kidnapping and murdering eight-year-old Tazne van Wyk.

The buildings were near Goodwood magistrate's court, in Cape Town, where Moydine Pangarker's appearance was delayed for 90 minutes by a crowd of protesters who forced their way into the building.

Community members said the buildings targeted by the crowd - which also included a shop, which was looted - were known as “illicit drug outlets”.

After overturning a car, the crowd abducted alleged sex workers and a suspected drug-dealer from one of the buildings and dragged them around nearby streets, forcing them to point out properties where drugs are sold.

“It's essentially a lynch-mob rampaging through the area,” said a bystander.

TimesLIVE was told that one of the buildings that was set alight was targeted after people who left court once Pangarker was remanded in custody, told the crowd the 54-year-old had kept Tazne there after kidnapping her on February 7.

Residents said the area was plagued by drug-dealers and that they supported the actions of the protesters who attacked the buildings.

Police eventually used stun grenades to disperse the crowd and firefighters arrived to tackle the blazes.

'How many more must die?': Fury at arrest of man on parole for Tazne van Wyk's murder

The family of missing primary school pupil Tazne van Wyk, whose body was discovered in a storm water pipe in Worcester, believe her death could have ...
News
2 years ago

PODCAST | Eight steps into the clutches of a monster — where is Tazné van Wyk?

Eight-year-old Tazné van Wyk left her home on Friday (7 February 2020). All she had to do was walk eight steps to a tuck shop almost next to her home.
News
2 years ago