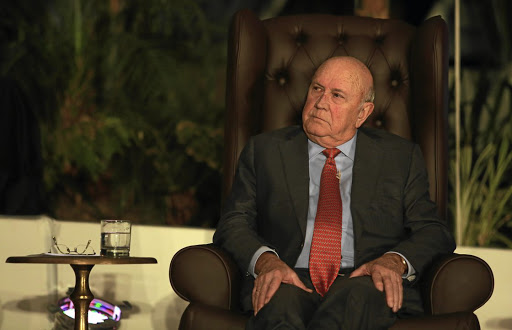 A group of 10 Afrikaner academics who benefited from apartheid have acknowledged it was a crime against humanity, SowetanLIVE reports.

The academics, who called themselves "concerned South Africans", released a declaration yesterday saying the continued denialism around apartheid being a crime against humanity was insensitive and aimed at avoiding the truth.

They all signed a declaration condemning and apologising for apartheid.

Their declaration came after former deputy president FW de Klerk recently caused a stir when he denied  apartheid had been declared a crime against humanity. De Klerk's controversial comments, followed by his foundation's statement, caused an uproar and stirred racial tensions.

He has retracted his comments and apologised through his foundation last week.

In its declaration, the Afrikaner group said the exclusion of black people from opportunities during apartheid was regrettable.

"We deeply regret the suffering of our fellow citizens under that inhumane and humiliating system, and express our sincere apology towards all fellow South Africans," it said.

"We also regret the fact that all South Africans were prevented from mixing freely socially and economically, thus being denied the enjoyment of the rich diversity of the Rainbow Nation and subjected to indoctrination based on fear and prejudice. It has left our society all the poorer for it."

"It was a missed opportunity. De Klerk lost a good opportunity to take us forward. I was angry about this. If you make the statements that he made, you are opening the wounds of the people who suffered. The least you can do as a person who benefited from apartheid is to be humble," Jacobs said.

Jacobs worked for the late former foreign affairs minister, Pik Botha, as consul-general to Germany and was appointed by former president Nelson Mandela as ambassador to Greece and Yugoslavia.

President Cyril Ramaphosa has said that denying apartheid was a crime against humanity and was, in his view, treasonous.

"Apartheid was so immoral in its conception and so devastating in its execution that there is no South African living today who is not touched by its legacy," Ramaphosa said in parliament last week.

Former president Thabo Mbeki in 2020 delivered on his promise to educate ex-president FW de Klerk on how apartheid was classified internationally as ...
News
2 years ago

Lest you forget: a reminder to FW de Klerk on the inhumanity of apartheid

The last president of the apartheid era in SA died on Thursday. In 2020, Jacques Pauw argued that De Klerk would have found South Africans incredibly ...
Opinion & Analysis
2 years ago

Apartheid was a crime against humanity, and denying it is treason: Ramaphosa