By Anthony Molyneaux and Esa Alexander 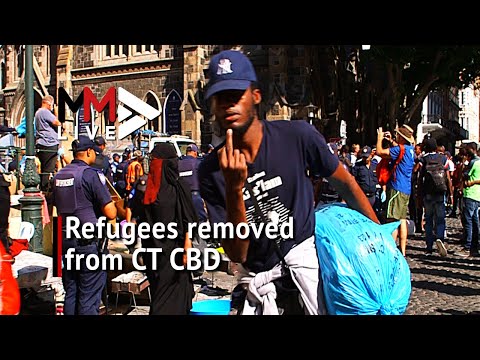 This was after hundreds of law enforcement officers, some wearing masks over their mouths, enforced a court order allowing the city to remove refugees illegally camping outside the Central Methodist Church in Greenmarket Square.

refugees and asylum seekers clash with law enforcement outside the St Mary’s Church opposite parliament in Cape Town @TimesLIVE pic.twitter.com/YuLpuqOQIi

The refugees' structures were dismantled by the officers.

Some refugees had packed up their tents and mattresses earlier in the day, in readiness of the enforcement. The operation was peaceful, with officials working steadily, although they were being heckled by some of the refugees.

By lunchtime, many of the refugees — who had been occupying the space since October — had left Greenmarket Square.

Refugees structures in Greenmarket square being removed by law enforcement. A court order gave the order two weeks ago for the structures to be removed after complaints from businesses and the unsanitary conditions. @TimesLIVE pic.twitter.com/7Y5wBKiWm2

During the operation, refugees shouted at police, accusing South Africans of being liars, criminals and corrupt.

“Our eyes are open, you are eating our money. We are suffering. Just come kill us here. Put us on an airplane and send us somewhere else,” one refugee said.

Another, a Congolese national wearing an EFF cap, said: “I eat white people, with lettuce and tomatoes. You people are dogs.”

A woman shouted that South Africans are all armed with knives and pangas.

Open fires, public urination and unsanitary conditions were some of the issues contravening bylaws that have been raised by the city.

The refugees, who are demanding relocation to other countries, citing fears for their safety in SA, have been protesting for months — first outside the UN Refugee Agency offices in St Georges Mall and then at the church.

The UNHCR had advised previously that there was no legal possibility of them being relocated to another country as demanded, while the city had offered them the opportunity to reintegrate into the communities where they came from prior to the protest action in the CBD.

Refugees chanting “refugees our right we are not criminals” as law enforcement move in to remove them from Cape Town’s CBD @TimesLIVE pic.twitter.com/ogdbLCn4xl

On Sunday, confirming the removal of the structures at Greenmarket Square to end what was an “untenable situation”, the City of Cape Town said its enforcement agencies “are monitoring locations to which persons are moving and will act on these if necessary”.

It added: “The court order says refugees may not settle elsewhere in the CBD, so persons will be in contempt of court.”

The refugees were apprised of the provisions of the court order, and had known for more than 10 days that the bylaw enforcement operation was coming, the city's JP Smith, mayoral committee member for safety and security, said in a statement.

Smith said the city was not insensitive to the plight of the refugees, “but we can simply not allow the situation to carry on unchecked, as it has had a major impact on surrounding businesses, including the traders on Greenmarket Square”.

Emergency shelter elsewhere would not be provided to the group, said Smith, “given the great need that exists among South Africans, not to mention the precedent that it would set”.

“We appeal to the refugees to return to the homes they vacated to join the initial occupation of St. George’s Mall. It is not legally or practically possible for the city to supply accommodation and no other sphere of government has agreed to supply such either.”