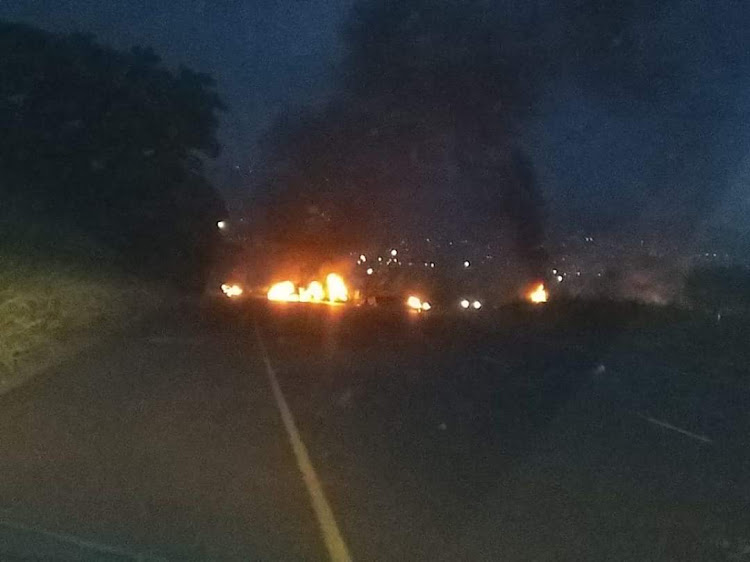 Angry residents of Cornubia blockaded a busy highway with burning tyres after two children were knocked over while crossing the road.
Image: Supplied

Angry residents of Cornubia, north of Durban, are demanding that a pedestrian bridge be erected over a busy highway after two children were run over on Monday.

They have resorted to blockading the M41, which leads from the northern suburbs to Umhlanga, with burning tyres and rubble to draw attention to their concerns.

Tuesday was the second day of the protest.

Metro police spokesperson Supt Boysie Zungu said the road had been closed between Palmview and the Phoenix highway and traffic diverted.

“The residents are protesting after a major accident on Monday where two children, aged six and seven, were knocked down by a motorist while trying to cross the highway.”

It is understood that most of the children living in the low-cost housing settlement attend school in neighbouring Phoenix and cross the highway because there is no bridge.

“A ward councillor is addressing the residents to call for calm. They are demanding that a pedestrian bridge be erected so that they can cross safely. They want an audience with the transport, community safety and liaison MEC Bheki Ntuli,” said Zungu.

“They want their children to be safe. They are frustrated because lives are in danger every day,” he said.

Higher education minister Blade Nzimande said his office will look into allegations of security companies colluding with management and student ...
News
2 years ago

Law enforcement officers lined up again on Monday morning to enforce the court order granted to the city to prevent the group from relocating ...
News
2 years ago

Police say the situation is tense in Ladysmith, in northern KwaZulu-Natal, as protects against the mayor bring the town to a standstill
News
2 years ago