One of SAA's most seasoned pilots is in charge of the flight to Wuhan to bring South Africans back from the coronavirus-hit Chinese province.

Captain Vusi Khumalo is the commander of the Airbus A340-600 Series flight.

“He is a chief pilot at SAA. He has been with the airline since 1994,"  the airline's spokesperson Tlali Tlali said.

The flight, a military operation but manned by SAA cabin crew, left SA on Tuesday night and is expected to leave China on Friday. 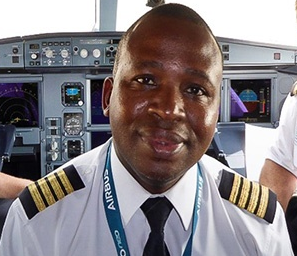 “The staff on the charter volunteered their service and participation and the necessary counselling and education on the virus and the risks associated with it was communicated to staff,” said Tlali.

The staff and crew received two days of training before the departure.

“The identity of the employees on the mission cannot be disclosed without their consent, save for the commander of the flight [Khumalo],” Tlali said.

In 2019, President Cyril Ramaphosa boarded an SAA flight manned by Khumalo. Ramaphosa’s office had taken to Twitter to share snaps of Ramaphosa aboard the plane.

Today I had the pleasure of flying with our national carrier en route to Kigali, Rwanda for the 10th Extraordinary Summit of Heads of State and Government of the African Union. I wish to thank the men and women at SAA for your hospitality. pic.twitter.com/aHDWiXS2Kp

Tlali said while the mission was being carried out by SAA staff, it remained a military operation.

“SAA is taking directives from the military insofar as the operation is concerned. Notwithstanding this, South African Airways will still observe all the medical, safety and security protocols as prescribed by the Civil Aviation Authority of SA,” said Tlali.

More than 130 South Africans were expected to be repatriated from China.

The South African embassy in China on Wednesday issued communication via the social networking site WeChat to South Africans who were expected to be repatriated back to the country.

The message stated that the repatriation would occur on Friday, departing at 9pm. 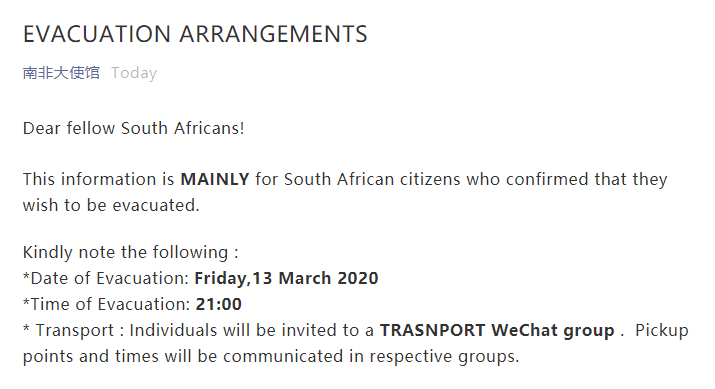 The notice issued via WeChat to the South Africans who wanted to be brought back home from Wuhan, China.
Image: Supplied

Upon their return, those repatriated and the cabin crew staff will remain in quarantine for 21 days at an isolated location until their results state that none of them is infected with the virus.

Roxanne Rawlins, a South African citizen in Wuhan, gives us a look at living in lockdown in the epicentre of the deadly coronavirus in the Chinese ...
News
1 year ago

The repatriation of South Africans from coronavirus-hit Hubei province, China, is going to cost taxpayers R25m.
News
1 year ago

The Gauteng health department is "worried" about the health of one of the province's coronavirus patients, who was confirmed to be in a critical ...
News
1 year ago