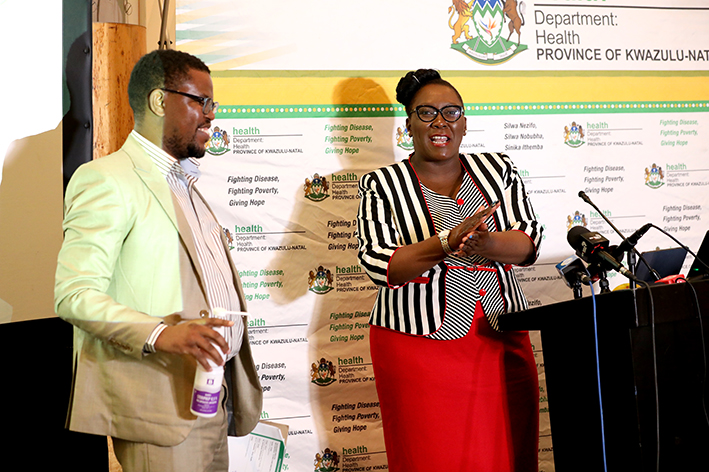 Health MEC Nomagugu Simelane-Zulu sanitises her hands during a media briefing on the coronavirus in Durban on Monday.
Image: Sandile Ndlovu

KwaZulu-Natal's department of health says it is preparing for the worst should the coronavirus spread to informal settlements.

Health MEC Nomagugu Simelane-Zulu said her office was working with the departments of economic development and human settles to formulate a plan to deal with this.

Simelane-Zulu was addressing journalists on Monday, after a national state of disaster was declared on Sunday, when 61 Covid-19 cases were confirmed.

The MEC also made it clear that her department was not afraid to forcefully remove people who did not want to go into isolation at its facilities.

“I must indicate that the law allows us, in the interest of public health, to remove someone forcefully should they not want to be removed. We have had instances where some of the patients we have dealt with refused in the past to go into isolation because they believed they could self-isolate and self-quarantine,” she said.

“The law empowers us to go to a judge should there be a case. Should it come to that we are more than willing to do it, because that will be in the interest of public health,” she added.

The province had boosted the number of isolation wards from eight to 52, with Simelane-Zulu indicating that the department wanted an isolation ward in each of its 10 districts. The Doris Goodwin TB hospital in Pietermaritzburg, Richmond Hospital and Clairwood Hospital, south of Durban, had been added as coronavirus hospitals.

From first reports to man in critical condition: how coronavirus has changed life in SA

Schools will be closed and a travel ban will be in place from Wednesday as SA tries to curb the spread of the coronavirus.
News
1 year ago