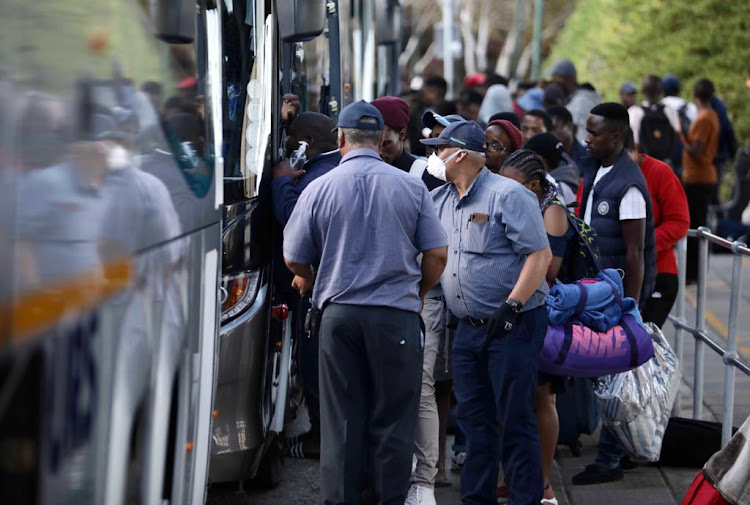 Masks and sanitiser were on hand as drivers supervised the loading of 360 students and their luggage at the University of Cape Town on March 19 2020.
Image: Esa Alexander

The six, 60-seaters were provided by UCT so students who had been asked to vacate their rooms in the battle against Covid-19 could go home.

The buses left at 6pm bound for cities in the Eastern Cape, Free State, KwaZulu-Natal and Gauteng.

“Students travelling further beyond the metros will be assisted to ensure that they reach their homes safely and conveniently,” UCT said in a statement.

The departure of the buses ended a week in which acrimony erupted between UCT and its student representative council, part of which said students would refuse to leave.

SRC president Akha Tutu blamed “rogue elements” in the council for the row after its secretary-general and deputy secretary-general, Asemahle Ntumntum and Siseko Kosani, instructed students on Monday to “occupy” residences.

On Wednesday, Tutu said: “No, we are not occupying. The most sensible thing now is to follow the directive of the university. Of course, there are some rogue elements in the SRC who just disagree for the sake of disagreeing.”

In a statement on Thursday, the SRC said there were still vulnerable students who had “nowhere to go”, and a list of these people would be discussed with university management at noon on Friday.

“The university has allocated additional staff to ensure that all students are responded to,” it said. “In the interim you will not be forced to leave the residence you are based at.”

The president of the SRC at the University of Cape Town has blamed 'rogue elements' in the council for saying students should remain in residences ...
News
1 year ago

The statement also apologised for the conflict over the instruction to occupy residences. “This may have created additional confusion and anxiety for students,” it said.

“We are reflecting on this and working as a team to ensure that we remain true to our mandate to serve and represent the interests of students.”

UCT's statement said it had arranged immediate payment of allowances for students on financial aid, secured safe storage for students' belongings and liaised with the home affairs department in cases involving international students.

Students who have had to vacate University of Cape Town residences queue to board buses home on March 19 2020.
Image: Esa Alexander

“The decision to close residences was taken following extensive discussions with experts in the field,” it said.

“The residences, where large numbers of students live in close proximity, pose a high risk in terms of spreading the infection.

“In addition, they present a risk of a mass outbreak and this could add enormous further strain to a health system that will be stretched to capacity in the next weeks.

The SRC said UCT had indicated that between April 6 and 9 it would test students' ability to access online learning material. From April 16, the second term would begin online.

After shutting its doors on Monday in the wake of a staff member testing positive for Covid-19, the University of Cape Town confirmed on Thursday ...
News
1 year ago

UCT and Wits students have threatened mass action and launched court applications to protest against the sudden closure of residences to curb ...
News
1 year ago

The staff member travelled overseas and had been in contact with other academics, but not students
News
1 year ago