'If employers tell domestic workers to stay home, they must get paid': union on coronavirus 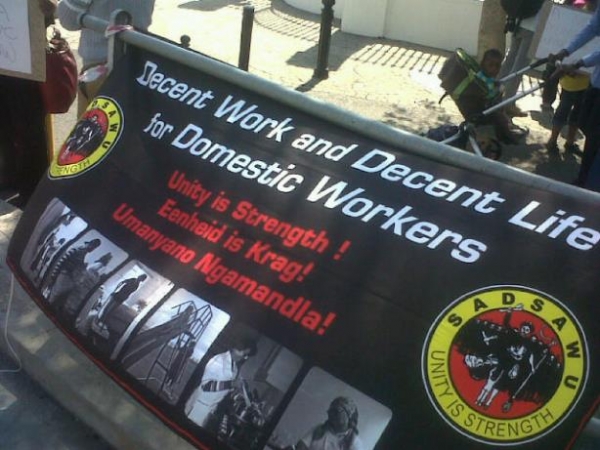 Domestic worker unions urge employers to act responsibly and continue paying workers even if they have been asked to stay home to curb the spread of Covid-19.
Image: GroundUp/Archive photo: Bernard Chiguvare

For most people who rely on piecemeal work, like many domestic workers, the decision to practice social distancing and stay home is at the risk of not being able to put food on the table.

“If employers tell their domestic workers to stay at home, they must still get paid for that,” says Pinky Mashiane, president of the United Domestic Workers of SA (UDWOSA).

After the president’s announcement, declaring the Covid-19 pandemic a national disaster, many businesses have heeded the call to minimise their workforce or to allow employees to work from home to try to curb the spread of the virus. But this is not possible for most domestic workers.

“If they stay home and they don’t get paid, what are they going to eat?” said Mashiane. It would be ideal for domestic workers to not come into work for their own safety and their employers, provided that they are still paid, she said.

Mashiane says that this agreement between an employer and their domestic worker needs to be put in writing. “They need to tell their employers to put it in writing that they will be staying at home for 21 days or a month and that the employers will still pay them.”

“It all depends on the circumstances that people come from. Everyone must practise personal hygiene. If people constantly wash their hands, they don’t get close to people who cough and wash the surfaces they are working on, they would be in a position to protect themselves,” he said.

Assistant general secretary of the SA Domestic Service and Allied Workers Union (SADSAWU) Eunice Dhladhla said that if employers expected their domestic workers to continue working, they need to do so responsibly.

“The employers could still let their workers come in and work, but they need to buy the correct things to protect their workers. Like hand gloves, masks, sanitisers. Although there is the saying ‘No work, no pay’ there are domestic workers who’ll stay home, not because they want to but because of this sickness they’re afraid of,” Dhlahla added.

Spokesperson for the department of labour Teboho Thejane said “because domestic workers are also workers, they are covered by the Labour Relations Act, Basic Conditions of Employment Act et cetera”.

He said that employers who decide to let their workers stay home, still have an obligation to pay them. The department has advised employers to practice social distancing if they feel that the working environment isn’t safe for workers or themselves. “A number of leave provisions will be used to assist those that might have to go on leave if they are affected. They can apply for special leave.”

Thejane said the department’s crises management committee was in talks about ways workers could be compensated for the period they were unable to work due to the virus outbreak.

“With regards to domestic workers, we need to evaluate the reasons why they are not coming into work,” he said.

The Constitutional Court has been asked to rule on whether parts of the Compensation for Occupational Injuries and Diseases Act, which exclude ...
News
1 year ago

Covid-19: Here's why wearing gloves is not ideal & handwashing is best

'Why are cashiers not given gloves?'
News
1 year ago