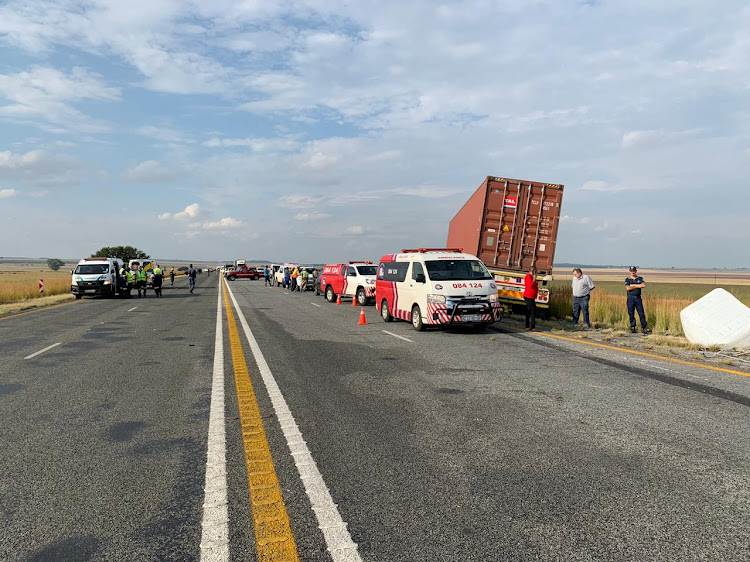 A truck, a minibus and a small bakkie were involved in the accident.
Image: Supplied by ER24

Nine people have died, and two others are seriously injured, in a multiple vehicle collision along the N1 near Kroonstad on Sunday afternoon.

The Free State's department of police, roads and transport said in a statement that preliminary information indicated that the driver of a bakkie was driving in front of a truck on the N1 between Kroonstad and Vaal Plaza towards Johannesburg. The motorist suddenly applied brakes. The truck driver also applied brakes and bumped into the vehicle in front and lost control ... and went into the opposite lane and collided with a 20-seater Iveco minibus travelling towards Kroonstad.

Nine passengers were declared deceased on the scene, the department said. Two more were seriously injured and were airlifted to the nearest hospital. Thirteen other people survived the accident with minor injuries.

He said local authorities attended the scene and will conduct an investigation into the circumstances of the accident.

A mass funeral was held on Friday for the victims of a bus crash in Centane in the Eastern Cape last week.
News
2 years ago

Ten people, including three children, died when a taxi and a car collided on the Golden Highway in Eldorado Park, near Soweto, on Wednesday
News
2 years ago

Seven dead as taxi and truck collide in Hectorspruit

Seven people died and eight were injured when the taxi they were travelling in crashed into a truck in Hectorspruit, near Komatipoort
News
2 years ago