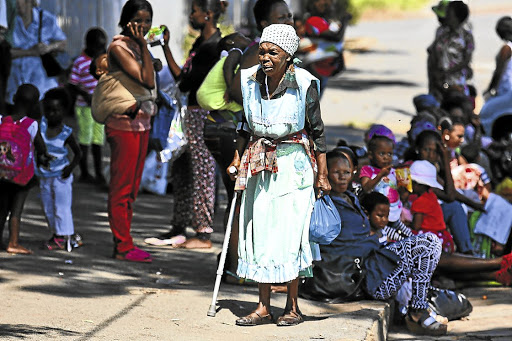 The state has reassured social grant recipients they won't be affected by the national lockdown.
Image: MARK ANDREWS

Social grant recipients should be able to continue collecting their money and buy food during the national lockdown starting on Thursday.

Minister of social development Lindiwe Zulu is putting plans in place for social grant recipients to be allowed to walk and commute freely, SowetanLIVE reported.

Zulu said she had written to the department of defence, stipulating that the recipients will still need to eat and get their grants, even during the lockdown.

The lockdown will restrict people to their homes, and those on the streets will  have to have good reasons for being there, or be able to prove they are essential personnel.

The number of Covid-19 cases has risen to 554, health minister Zweli Mkhize announced on Tuesday.
News
2 years ago

Zulu said she was proposing that the social grants card be allowed as an identification to afford people freedom of movement.

“Transport is of major concern to us, but we have our own suggestions that we think Sassa beneficiaries should be able to show their cards so they can be allowed to get food and money,” Zulu said.

Zulu said the department acknowledged that transport would also be an issue and suggested that people should therefore not rush to pay points, rather going to supermarkets where they can use their Sassa cards to shop at the same time.

She said  Sassa officials had taken a proactive decision to approach supermarkets to inform them of the challenges that had been brought forward by the coronavirus.

“We want to say to beneficiaries that they should not rush to go get their money because they can use their cards to get food.”

She said companies that are giving monthly food parcels to poverty-stricken people would also be allowed to continue.

In SA, spreading fake news about the coronavirus is punishable by a fine or jail
News
2 years ago

No loan, car or house payments for four months among EFF proposals to tackle coronavirus impact

The EFF has proposed socialist economic measures it believes should be implemented to help South Africans during the global pandemic.
Politics
2 years ago

EXPLAINED | Social distancing, self-isolation, quarantine & when they should be applied

As the number of coronavirus cases grows in SA, terms like social distancing, self-isolation and quarantine remain confusing for some.
News
2 years ago