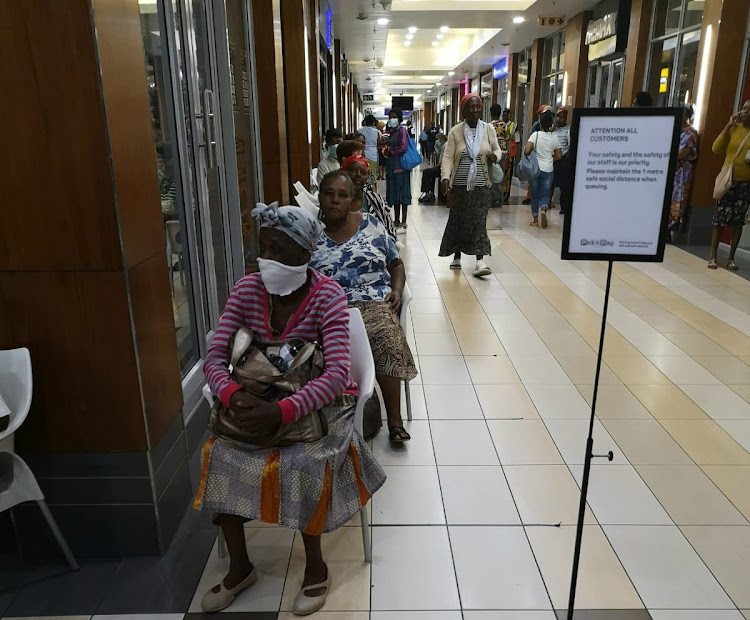 On day four of SA's Covid-19 lockdown, the elderly and disabled on Monday got their chance to stock up on basic essentials as staggered payments of their grants started.

Some expressed concern about their health while outdoors, but precautions including social distancing and hand sanitisers were observed at paypoints.

In Pimville, Soweto, the first day of pension grants collection was met with long queues at pay points and local supermarkets. Unlike other areas, residents in this area did not initially practice social distancing. However, community patrollers were on the ground to facilitate the queues and ensure the elderly were being offered hand sanitisers.

Community safety MEC in Gauteng, Faith Mazibuko, on Sunday announced that 3,000 patrollers would be deployed in various areas to manage Sassa paypoints.

“We are grateful. We didn’t know what was going happen to us,” she said.

Ngwenya said she was the breadwinner for a family of six, and had been running out of food.

“I was stressed because the children and grandchildren were asking questions when other people were buying a lot [panic buying].”

She said she would now stay at home “stress-free”.

Pensioner, Duduzile Macingawe expressed similar sentiments: “I feel good that we were allowed to get our money. At least we won’t sleep hungry with the children."

Another pensioner, who asked not to be named, said she had to catch two minibus taxis to get to the post office.

“I could not sleep well at night because we were told taxis would not operate, but now it is good the government changed the rules to help us. It shows that they care for us."

Transport minister Fikile Mbalula has relaxed operating hours for taxis and buses to operate from 5am until 8pm to accommodate the payment of social grants. 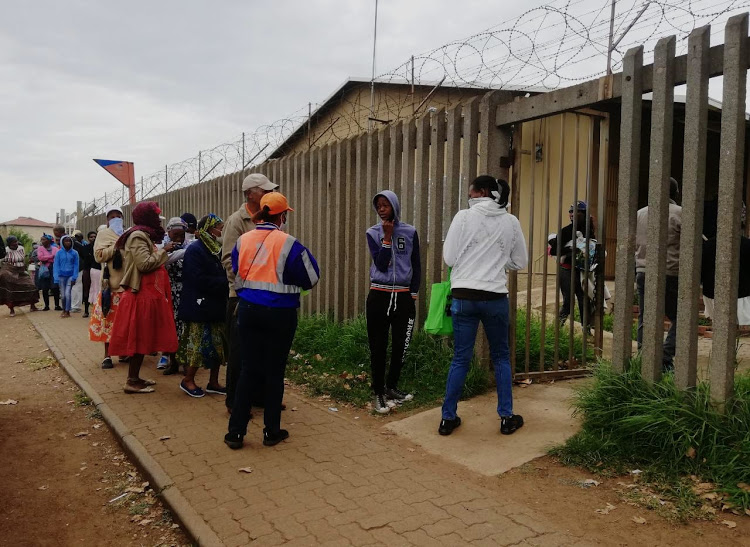 Scores of Sassa recipients turned up at the Pick n Pay store in Durban's Musgrave Centre, a payout point for social grant recipients.

Charity Shangase, 60, from Mayville, was one of the first people in the queue.

“Everything went smoothly for me. I am diabetic so I was very very worried about coming out but we had chairs that were set far apart and sanitisers, so I felt a bit better.

“I managed to do a little bit of grocery shopping, but I will have to come back because I can't carry everything.”

Shangase said she was not sure how she would return home because there were very few taxis.

“I will die if I have to walk back home. I will just sit and wait.”

Most pensioners were in high spirits, saying they appreciated being outdoors for a short while.

Jayseelan Naidoo travelled about 30km from Phoenix, north of Durban, to Musgrave to collect his ailing father-in-law's pension.

“My wife is blind and is an essential worker. We have to borrow money so she can go to work in an Uber. This morning we paid R250.

“She can't collect her father's pension, so I am here. It's very tough for us. We buy a few groceries at a time because she is the only one working. I am unemployed but we are abiding by what government says,” said Naidoo.

Nomvula Nxumalo, mother of two young children, said she was nervous about being out of her home.

“I walked here. I need the money to buy food for myself and my children. I have a one-year-old child so I will make sure I get baby formula.

“I'm going to sanitise myself properly when I get home.”

In Johannesburg, Sophiatown and Westdene residents made their way to a local shopping complex where Shoprite supermarket is the biggest store.

Travelling by foot or by taxi, the Sassa grant recipients woke up early to beat the queues. Shoppers were separated into two queues, with only 50 people allowed into the store at a time. One queue was allocated to normal shoppers while the other was for grant recipients.

“We have done the same at the tills in order to adhere to the rules as much as possible”, said Shoprite butchery manager Morne Nienaber.

He said some shoppers didn't like the rules, and he was grateful to have Metro police officers and members of the Bosmont community patrol on site in case anything got out of control.

“What's scary and funny is that we have been busier during the lockdown than we usually are.”

Standing in line awaiting public transport, Sylvie Douglas shared how happy she was to get her shopping done. However, she was worried about how she was going to get home.

“I hope I will be able to get home before this afternoon”, she said.

“The transport is a lot slower today than usual. There are a lot of people who need to get home with their groceries," said Douglas.

A pensioner who asked not to be named said he was the only person planning to leave home during the lockdown to buy essentials because his wife was sickly and  at greater risk of contagion.

Another grant recipient who was standing at an Absa ATM queue and did not want to be named told TimesLIVE that she lives in a 2-bedroom house with six other individuals. Due to the house being small, she said it has not been possible to practise social isolating.

A young mother, she said: "There are three children in the house I live in and as parents we are trying our best to take precautions, but there is only so much we can do."

The country will go into a national lockdown from midnight on Thursday as a measure to curb the spread of coronavirus.
News
2 years ago