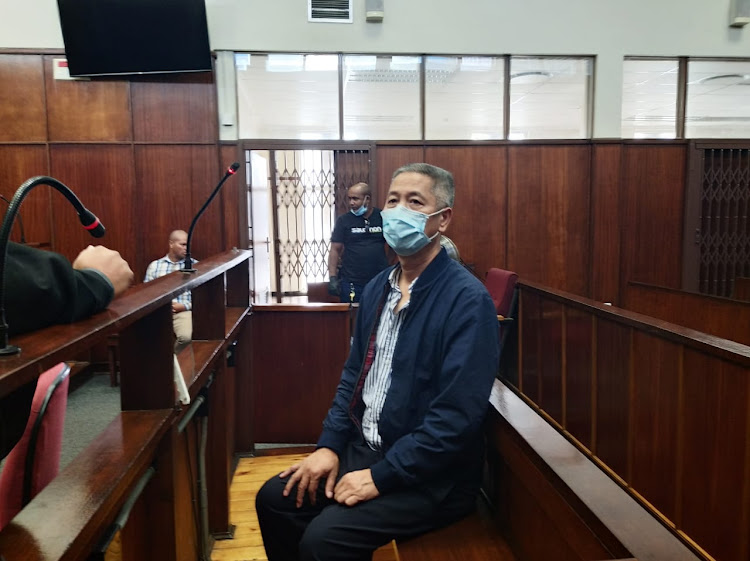 A Chinese businessman who was arrested on Sunday appeared in the Durban magistrate's court on Monday for contravening the Disaster Management Act.
Image: Zimasa Matiwane

A 53-year-old Chinese national has been granted R20,000 bail in the Durban magistrate's court in connection with charges related to contravening the Disaster Management Act.

Ming Lai He was arrested by a multidisciplinary team on Sunday for allegedly locking up 14 employees for several days and forcing them to produce masks in response to the demand created by the outbreak of the coronavirus.

. He faces charges of forced labour in contravention of the Basic Conditions of Employment Act, failure to maintain a safe working environment and failing to lock down a non-essential business in contravention of the Disaster Management Regulations. He, who operates a fragrance manufacturing company, will make his next appearance on June 20.

Meanwhile the Chinese consulate in Durban has expressed shock at the arrest of the man who it said was “working hard to help KZN in its fighting against the virus”.

After a tip-off, inspectors from the KZN department of economic development consumer protection unit made the arrest and “rescued” the 14 workers at the firm in Glen Anil.

In a statement, the consulate general of China in Durban said, “the factory located in Glen Anil Durban was specially set up to help KZN people's fighting against the virus last week”.

Following the president's announcement of a 21-day lockdown period, many South Africans are still in the dark about how government will help small businesses. While many businesses will be assisted, some depend solely on a day to day income on small items sold while on the streets. Here's all you need to know about how SA government plans to assist businesses during the #21DayLockdown.

Police rescue 14 workers who were locked in Durban factory and forced to make masks, owner arrested

Several consumer complaints against a Durban business resulted in the arrest of the owner and the rescue of 14 workers who were locked in a factory ...
News
2 years ago