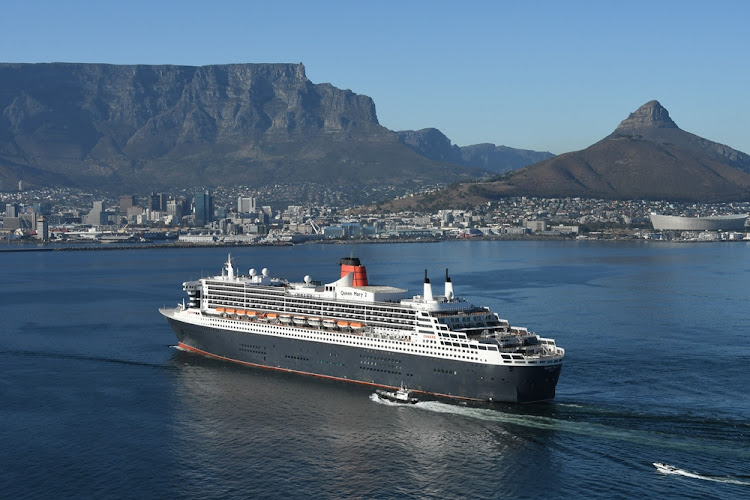 The Queen Mary, pictured here in Cape Town, is currently outside the port of Durban. The general manager Moshe Motlohi said the shipping line Cunard announced earlier this month that it had ended its three international voyages early in response to the coronavirus pandemic.
Image: Cunard

On Friday, a ShipMed doctor boarded the vessel to carry out Covid-19 tests on board.

"All precautions, personal protective equipment and protocols as outlined by the department of health were followed during the operation," he said.

The operation was completed at 11pm.

It is understood that there are 1215 crew and 264 passengers on board. Most of the passengers were flown home by the shipping line apart from those with medical conditions that prevented them from flying.Of those on board, 6 crew are South African. They will have to be tested before they are allowed to leave and enter the port. The ship’s capacity is 2691 people.

On Saturday, Transnet National Ports Authority (TNPA) said the passenger vessel had requested clearance to be allowed to dock in the port to receive bunkers and stores.

"If approval is granted by the department of transport and the port health unit of the health department, the vessel will dock, refuel and disembark six South African crew members before setting sail for Southampton in the United Kingdom," said TNPA.

Port of Durban general manager Moshe Motlohi said the ship’s line, Cunard, announced earlier this month that it had ended its three international voyages early in response to the coronavirus pandemic.

"The cruise liner was already on her way to South Africa when the South African government announced a ban on cruise ships from March 18. She was not among the initial six cruise ships which authorities confirmed would be permitted to dock in the country as an interim measure, following new regulations promulgated by the transport minister on March 18.

"The regulations prohibit any disembarkations, apart from returning South African citizens or permanent residents, and prohibit embarkations unless they are for departing foreign countries," Motlohi said.

Newlyweds Yadira Garza and Joel Gonzalez began their honeymoon cruise on the MS Zaandam with romantic strolls overlooking the sea, but have now spent ...
News
2 years ago

The world’s largest leisure travel company is offering its cruise ships for use as temporary hospitals during the coronavirus pandemic.
News
2 years ago

All passengers have disembarked from MSC Orchestra: Samsa

The South African Maritime Safety Authority (Samsa) said on Tuesday that all 2,408 passengers who were on the MSC Orchestra cruise ship have ...
News
2 years ago