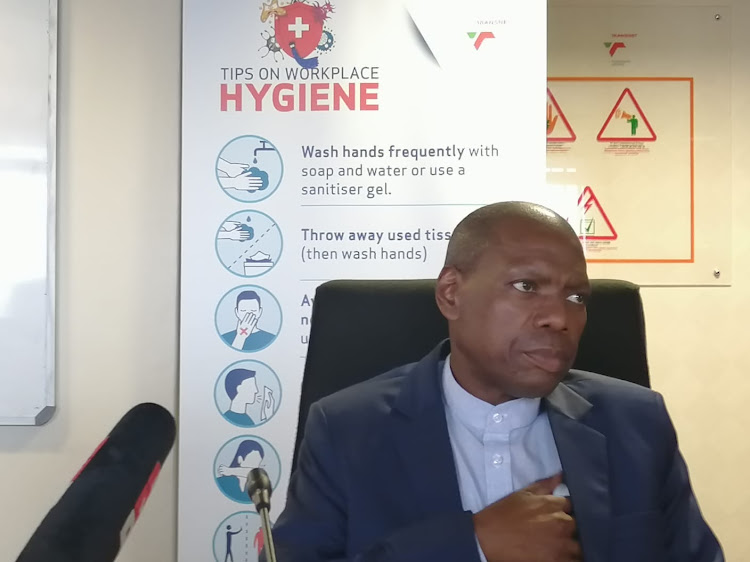 Health minister Dr Zweli Mkhize briefs media at the Durban port on Tuesday afternoon. He announced that the number of Covid-19 cases in SA has risen to 1,353.
Image: Orrin Singh

Five people have died and the number of Covid-19 cases in SA has risen to 1,353, health minister Dr Zweli Mkhize said on Tuesday.

Of the confirmed cases, Mkhize said, 633 were in Gauteng.

The number of confirmed cases was up from the 1,326 announced by President Cyril Ramaphosa on Monday night. Ramaphosa announced at the time that SA had three deaths.

In total, Mkhize said, about 39,500 people had been tested. He was speaking at press conference at the Durban port on Tuesday evening.

The Gauteng Health Department started screenings, tracing and testing for Covid-19 in the township of Alexandra on March 31 2020. The Johannesburg township confirmed its first case of Covid-19 on March 30 2020. President Ramaphosa announced a large-scale medical management programme of 10 000 workers would be deployed across SA to help curb the spread of the coronavirus.

He said there had been an interesting trend regarding the confirmed new infections.

"The rate of increase of the numbers is not as much as we have initially anticipated. The figures that we thought might be possible by April 2 could have been anywhere between 4,000 and 5,000, but we don't think we will get there."

The two new deaths were in Gauteng and KZN, said the minister.

In Gauteng, the man "had no history of travel, but had been in Cape Town and was around Krugersdorp".

"He was admitted with respiratory distress," he said.

Regarding the KZN death, Mkhize said it "happened a few hours ago".

"She is a 46-year-old lady admitted with hypertension and chronic asthma, and tested positive in the process.

"We send our condolences to her family," he said.

"The number is five," he added, referring to the current Covid-19 death toll in SA.

In a later statement, Mkhize spoke about slowing down in the number of confirmed cases.

"Looking at the trend we are seeing of the day to day new infections, we are cautiously optimistic that we may not see the numbers rising as high as we had initially projected. We should, however, bear in mind that we are approaching winter, which could change the dynamics entirely," he said.

Mkhize added that, at least for now, the country was going well.

"It is clear from looking at other successful countries that we, as South Africa, can make a real impact and flatten the curve if we continue to observe the regulations that have been set out by government.

"Therefore, I would like to encourage South Africans to continue to stay at home, observe good hygienic practice and work together with government. This way we have a real chance of containing the spread of Covid-19," he said.

Covid-19 tests are coming to your door: Ramaphosa

Tests for Covid-19 will soon be done at homes across the country, the president announced on Monday night.
News
2 years ago

The number of Covid-19 patients in the Western Cape had risen to 348 by midnight on Monday, said premier Alan Winde.
News
2 years ago

Gauteng's Alexandra township has recorded its first case of Covid-19, the provincial health department said on Monday.
News
2 years ago