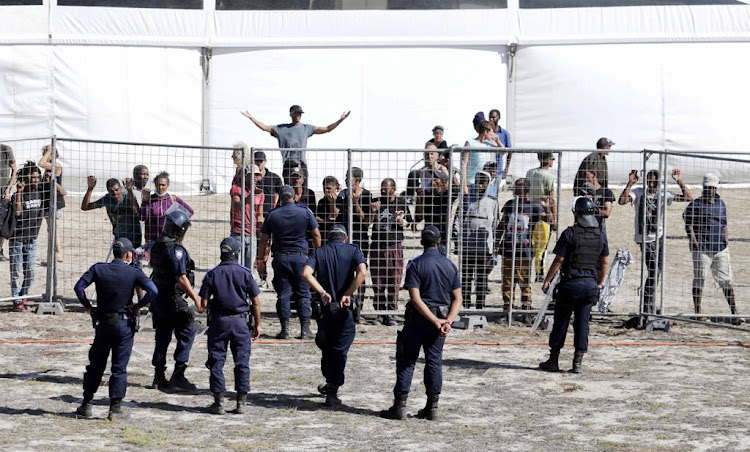 Police guard a perimeter fence at Strandfontein camp set up to help the homeless during the Covid-19 lockdown.
Image: Esa Alexander/Sunday Times

Human rights monitoring organisation Amnesty International says it is concerned about the SA government’s plans to ‘de-densify’ some informal settlements, after a “worrying” report about police conduct in a Western Cape camp.

GroundUp reported on Tuesday that homeless people at the Strandfontein Sports Grounds, Cape Town, were shot at with rubber bullets by police after they began to protest — breaking down a fence and throwing stones — about conditions at the tent camp. The facility was set up as part of the national lockdown to disrupt the spread of Covid-19.

Mayoral committee member for safety and security JP Smith subsequently said it was untrue that rubber bullets were used.

GroundUp stated, however, that its reporter was on site and he and other witnesses heard and/or saw shots being discharged at least twice.

In a statement reacting to the claim, Shenilla Mohamed, executive director of Amnesty International South Africa, said: “Amnesty International South Africa is alarmed at reports of the use of excessive force towards people who are already vulnerable, and we repeat our call, once again, that while it is urgent and important to ensure that people adhere to the lockdown, the police should not use excessive force against protesters.

“The use of excessive force is worrying. We are concerned about the government’s plans to ‘de-densify’ some informal settlements. Relocation can be very disruptive, and this at a time when social networks and community are key. We are concerned that ‘de-densification’ procedures could result in further incidents where excessive force is used, which would be devastating for the relocated communities as well as our society as a whole.

“Security forces must act within the law at all times and should adopt an educational approach, rather than using excessive force against the people, to sensitise anyone who is not complying with the rules of the lockdown, or who is being moved during ‘de-densification’.

“Every person must clearly understand why they are being moved, and this must be done sensitively with their specific needs in mind. No-one must be forcefully removed from their homes.

“Everyone is equal before the law, and should be treated as such, whether homeless, a refugee or a person living in poverty.”

Amnesty said the United Nations Basic Principles on the Use of Force and Firearms by Law Enforcement Officials, among other international standards, clearly provide that law enforcement officials may only use force if other means remain ineffective or have no promise of achieving the intended result.

When using force, law enforcement officials should exercise restraint and act in proportion to the seriousness of the offence and to the legitimate objective to be achieved, said the organisation.

The City of Cape Town said in a statement the camp was a proactive measure to help the homeless. The Strandfontein sports complex “enabled us to move quickly as it has a large perimeter fence, existing infrastructure with water and electricity available, and is big enough to accommodate 2,000 homeless persons on one site, making the delivery of services for the homeless far more efficient”. 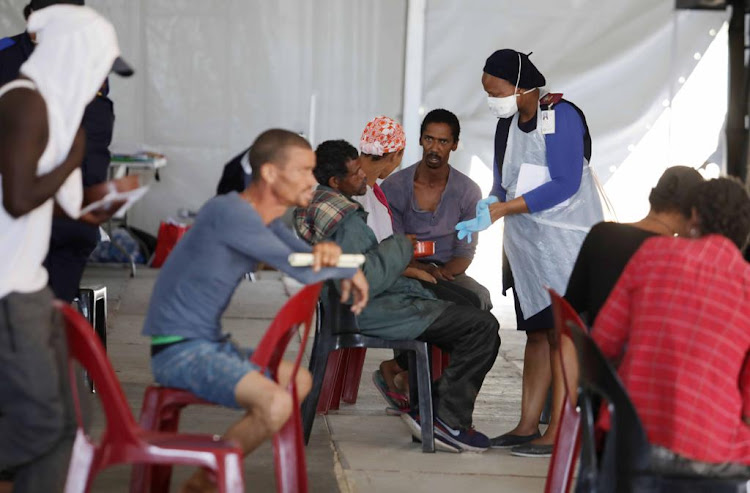 Healthworkers are providing assistance to the homeless being housed at the Strandfontein camp.
Image: Esa Alexander/Sunday Times

Media were escorted on a tour of the facility on Thursday, to show the conditions at the camp and the services being provided to the homeless.

GroundUp reported that Cape Town mayor Dan Plato held a press conference on Thursday afternoon at the Strandfontein Sports Complex. Hosting the conference and walkabout with the mayor were mayco members Smith and Zahid Badroodien (community services and health).

The site is large and the city asserts that it will hold about 2,000 people. Smith said that there were currently 1,495 people living on site. There are four major marquee tents set up, which constitute the main sleeping areas. There are also smaller tents scattered about.

The homeless people at the Strandfontein sports complex trying to jump the fence out of frustration at being on lockdown at the site. The City started relocating them to the site aimed at curbing the spread of Covid-19.@TimesLIVE @homeless @Covid19InSA pic.twitter.com/1Ok81VLZab

Is there enough space?

Badroodien in response to a question about social distancing at the camp said that about 16m2 is allocated per person. But we estimated the size of the tents, which are neatly divided into 16m2 segments, and this appears to be impossible.

Does the City have enough space for all street people?

Badroodien estimates the street people population to be “almost 6,000 people”. The Culemborg shelter has been extended for the lockdown to cater for an additional 500 people bringing its capacity to over 700 people. With Strandfontein’s capacity of 2,000 this still leaves a massive shortfall. There were plans to place homeless people at Paint City, but currently the refugees who were occupying the Central Methodist Church are staying there.

Are people free to leave the Strandfontein site?

Smith has stated that people are free to leave the site; no-one is held at Strandfontein against their will, but on the other hand he has also said that any homeless person that leaves the complex would be liable for arrest, by SAPS, and prosecution under the lockdown regulations. But SAPS spokesperson Capt Ezra October told GroundUp that SAPS would not arrest a homeless person for being homeless.

Are homeless people safer at the city sites than where they usually stay?

Smith did however say that more medical services were planned, including a doctor and two medics present during the day, and an EMS team at night. At present nursing staff are leading the on-site medical response.

Smith said that Hassan Khan of the Night Shelter, who is administering one of the tents, has increased the food portions to help addicts who are suffering withdrawals with cravings. Smith said that according to SHAWCO, addiction rates at the site were over 50%.

But there is no naloxone, the preferred treatment for heroin withdrawal, on site, though there is anti-nausea and mild pain relief medication. GroundUp consulted a health care professional who said that a massed camp was not a good environment for a person in withdrawal.

Smith said that there were 40 to 50 city law enforcement officers and 50 to 60 private security officers per shift. The city emphasised its commitment to ensure the safety of residents of Strandfontein.

Plato did not reveal the budget for the site but said it was in the “tens of millions”.

A 100-year-old oil painting was destroyed and the organ damaged during refugees' five-month stay in the Cape Town Central Methodist Mission.
News
2 years ago

During the site visit, media were chaperoned from a briefing tent, which forms part of the city’s operational command structure, to a screening tent. Volunteers from SHAWCO were performing screening, as well as health checks.

There was an altercation with law enforcement when some of the people at the camp tried to break down a fence.

Many people staying in the marquees shouted to the journalists that they wanted to leave, that they weren’t happy, and that they weren’t being fed enough. At one tent, homeless people began attacking the surrounding fence, breaking through in places, which prompted a response from city law enforcement.

Some officials openly blamed the media for the commotion. One said: “This is what you create.”

(When Tuesday’s unrest broke out, GroundUp said its reporter was the only media on site.)

Dean Norton has been staying at the site a few days.

Deon Norton, 52, has been at the camp for a few days. He said the tents were ice cold at night. He had previously been living in Claremont, where he had a tent and mattress. When police picked him up, they told him he could leave those items behind as he was “gonna get new stuff”, he said.

Norton said there was little to do during the day. He was glad to be able to get his arthritis medication from the mobile pharmacy, as he had run out.

The media visit concluded with a short piece of political theatre, as the ANC’s Cameron Dugmore quarrelled with Smith over protection for law enforcement and conditions on site.

Meanwhile housing activist group Ndifuna Ukwazi published an open letter to Richard Bosman, the city’s executive director of safety and security and disaster management. The letter expressed concern with health conditions at the camp and its viability. The letter described a number of inadequacies and argued that this type of camp exacerbated, rather than alleviated the risk of infection.

The eThekwini municipality wants to create open spaces for the city's homeless to live in once the 21-day lockdown ends.
News
2 years ago

All the Covid-19 updates.
News
2 years ago

The eThekwini municipality will continue to demolish unoccupied shacks within the city during the Covid-19 lockdown.
News
2 years ago

WATCH | Stories from the streets: Homelessness during the time of Covid-19