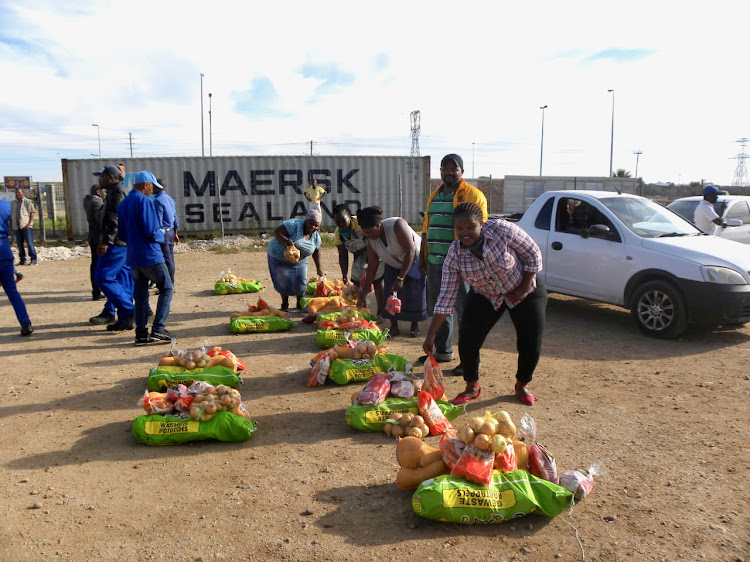 About 15 traders were the first to receive food parcels from the municipality in Ikamvelihle on Thursday.
Image: Joseph Chirume/GroundUp

Some residents of Port Elizabeth threatened protests and to disrupt the Nelson Mandela Bay Municipality from distributing food parcels to informal traders.

The traders have already lost two weeks of income due to the national lockdown to mitigate the spread of Covid-19.

“Most of them cannot manage to put food on their tables,” said Thsonono Buyeye, the acting executive mayor. He said only informal traders on the city database would be assisted. More than 700 traders will be given groceries by their ward councillors.

About 15 traders were the first to receive their parcels in Ikamvelihle on Thursday, GroundUp reports. But some residents who gathered at the open field after word spread about the food parcels were not pleased.

Nomzingisa Wilson said she left her shack open in Nomakanjani informal settlement and rushed to Ikamvelihle hoping to receive a food parcel.

“This action is going to create problems between residents in this community. We can’t have one section of our society being preferred over others. We will have to protest and barricade Addo Road as usual until we get parcels like everyone else,” she said.

Thembelani Thembani said, “We will sit down as a community and approach the municipality. They have to give us a good answer or we will embark on a violent protest action.”

Thembani said the food should be distributed to the poor.

One of the beneficiaries, Nonopela Bailus, who operates a small car wash business next to his fruit and vegetable stall in Ikamvelihle, said, “I am grateful for this assistance. I hope the government extends such assistance to other poor people in this area because many are struggling to make ends meet.”

Human rights monitoring organisation Amnesty International says it is concerned about the SA government’s plans to ‘de-densify’ some informal ...
News
1 year ago

Sipho Majola, a 59-year-old waste picker from Benoni, says news of the lockdown reduced him to tears because it meant he could no longer move freely ...
News
1 year ago

Eastern Cape premier Oscar Mabuyane on Thursday said that the constant relaxation of lockdown regulations was not helping the province in its ...
Politics
1 year ago