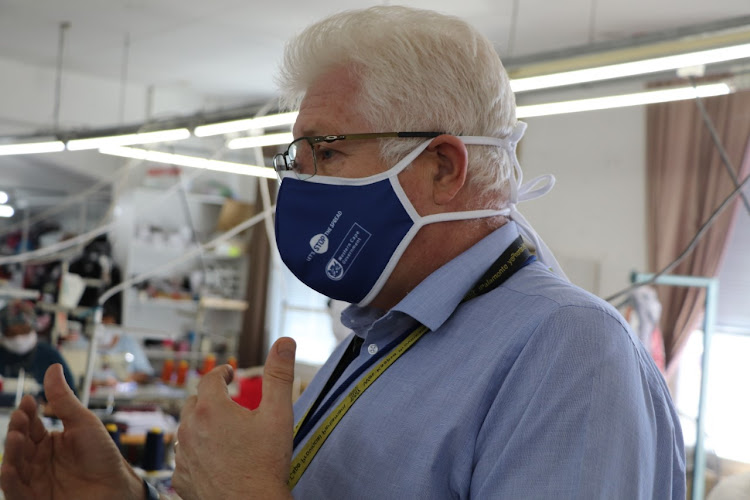 Western Cape premier Alan Winde during a visit on Tuesday to a Cape Town clothing factory that has switched to making masks. The province has experienced a rise in looting over the past week.
Image: Western Cape government

Police in the Western Cape are helping bottle store owners who fear looters to move their stock to safer locations.

Community safety MEC Albert Fritz said the Western Cape Liquor Authority had approved the clearing of 31 shops, and most of them had already transported their stock to safer premises.

Several liquor stores in Cape Town and surrounding areas have been looted in the last few days of the Covid-19 lockdown.

One of police minister Bheki Cele's biggest headaches since the Covid-19 lockdown was announced is the growing spate of alcohol theft.
News
2 years ago

Fritz said even though he understood that many people were struggling to put food on the table, “looting will not be tolerated”.

“To prevent further looting of liquor stores, the department of community safety was advised by the SA Police Service that liquor should be transported to safer premises,” he said.

“In consultation with SAPS legal services, the necessary protocol was established and has since been communicated by SAPS to all station commanders,” said Fritz.

Another liquor store looting. This time in Avonwood in Cape Town.

The booze is done so now they target liquor stores. When the food is done...pic.twitter.com/noVqCPBKcn

“In writing to SAPS, it has been requested that where licensees have identified the risk of their premises being looted, that they are able to move the liquor to a place of safety. This initiative will prevent the raiding and looting of liquor stores.

“To date, SAPS and the [liquor authority] have approved 31 notices for the transporting of liquor to safer premises, the majority of which have already been transported.”

Fritz condemned the alleged involvement of police officials from Bonnievale and Delft in the theft of alcohol under the lockdown.

Seven Bonnievale police officers appeared in Swellendam magistrate's court on Tuesday for allegedly robbing a liquor store. They were charged with defeating the ends of justice, theft, unauthorised use of a motor vehicle, dealing in liquor and contravening disaster management regulations.

Police confirmed on Monday that two people were arrested in connection with the looting of a liquor store at the weekend in Langa, Cape Town.
News
2 years ago

The seven were each released on bail of R5,000 and the case was postponed until June 24.

Potelwa said a group of about 16 suspects stormed a supermarket in Gatesville at about 2.40pm on Tuesday afternoon, threatened cashiers and took five cash registers with cash and groceries.

“Athlone police responded promptly and four suspects aged between 21 and 24 were arrested and some stolen items recovered,” said Potelwa.

“Meanwhile, in Manenberg large crowds took to the street and broke into two wholesalers in the township, helping themselves to grocery items.

“Tracing operations by police to track the suspects and retrieve stolen items are currently under way.”

In Mitchells Plain, public order police have been dealing with sporadic protests in Tafelsig that started on Tuesday morning.

“Large crowds took to the streets in protest against food parcels distributed to some communities within the broader Mitchells Plain townships. Tyres were burnt, roads barricaded and police pelted with stones. Three suspects aged 16, 18 and 20 were arrested for public violence,” said Potelwa.

All arrested suspects are expected to appear in court soon.

Ramaphosa will respond on Friday to demands to lift booze ban

President Cyril Ramaphosa has asked the Gauteng Liquor Forum to give him until Friday to fully respond to its letter demanding the lifting or changes ...
Politics
2 years ago

A man accused of raping an 18-year-old at the Strandfontein camp where homeless people in Cape Town have been accommodated for the lockdown appeared in the Mitchells Plain magistrate's court on Tuesday.

The 36-year-old was given bail of R2,000 and the case was postponed until May 14. The alleged rapist cannot be named until he has pleaded.

Western Cape premier Alan Winde said the number of people who had tested positive for Covid-19 in the province had risen to 657, from 628 on Monday. More than four in every five patients are in the City of Cape Town.

Winde said 35 patients were in hospital, including 18 in intensive care, while 184 had recovered.

President Cyril Ramaphosa disclosed on Monday that 148 suspects have been arrested for crimes of gender-based violence since the start of the ...
Politics
2 years ago

If the amount of alocohol people drink can be contained, emergency rooms can be mainly used to fight the Covid-19 pandemic, an expert says.
News
2 years ago

Selling booze under lockdown 'equal to conspiring for mass murder of poor': EFF

The EFF has condemned requests by the Gauteng Liquor Forum for Covid-19 lockdown regulations to be relaxed and for government to allow the sale of ...
Politics
2 years ago