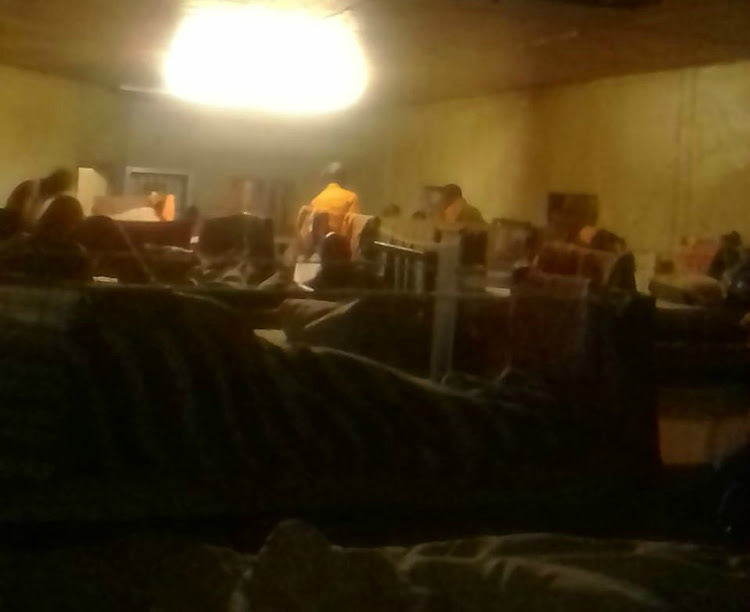 Inmates at St Albans fear that Covid-19 will spread rapidly now that a warder has tested positive
Image: SUPPLIED

As a warder at St Albans Correctional Centre in Port Elizabeth tested positive for Covid-19, prisoners are fuming that they were only asked simple questions about their health despite some showing symptoms for the coronavirus.

The total number of infections in the Eastern Cape was 175 on Tuesday afternoon.

Of these,  53 inmates and 24 correctional services officials in the province have tested positive for the virus.

The East London Correctional Centre, where the virus has spread rapidly, has the bulk of the correctional services cases  — 76.

Besides the St Albans case and those at the East London prison, a correctional services official at the department’s head office in Pretoria has also tested positive.

The tests were done on the officials by the National Health Laboratory Services on Monday, with the results expected within 48 hours.

“The tracing processes are under way in St Albans,” Nxumalo said.

The department’s disaster management response strategy had also been activated.

“This is looking at the rapid identification of laboratory-confirmed cases, the isolation of those who test positive and management of the pandemic within our centres,” he said.

“They are rendering care services to distress cases and monitoring those likely to develop acute respiratory challenges.”

While the department’s swift move to quarantine officials was applauded by the Police and Prisons Civil Rights Union (Popcru), prisoners at St Albans feel they have been left in the lurch.

“They have done nothing to check if we were infected by this warder,” an awaiting-trial prisoner at Medium A, who declined to be named, said.

He said the warder worked in the section of the prison he was jailed in but that he had only been asked if he had recently shown any symptoms of the virus.

“We are all worried about our health. They never even tested us.

“All the new inmates are also not tested or kept separately when they arrive,” the man said.

“All they did was screen us, which involved questions that we had to answer.”

He claimed that the warder’s girlfriend worked at Medium A where some cells had up to 100 inmates.

“It is a ticking time bomb for this virus to explode at this prison,” he said.

A second prisoner, housed in Medium A, said even though he was in jail he still had rights.

“They don’t care about us. They just tested the officials.

“We have been in contact with this warder’s partner.

“We deserve the right to be tested.”

A third prisoner, also housed at Medium A, said: “We live on top of each other and they only let us wash our hands before we eat and that’s it.”

He said many of the warders did not bother to wear the masks given to them.

“They don’t sanitise the cells like they promised to.

“They lie all the time about what is going on in here.”

Nxumalo did not respond to questions about how prisoners were practising social distancing or the inmates’ claims.

“They have done well to assist officials at the prison,” he said.

“There is more than enough protective gear for officials and the entire section where the warder worked was decontaminated.”

He said most of the officials were kept in quarantine at the prison barracks while a handful went home.

“These people will be transferred to the guest houses on the prison grounds.”

Skade said students who had recently finished their training would be used to fill the gap.

“They will be deployed from the area commissioner’s office.”

The number of positive Covid-19 cases in SA is fast climbing towards the 2,500 mark.
News
1 year ago

Meanwhile, Nxumalo said the disinfection of the East London Correctional Centre was under way.

“This is to prevent contamination of surfaces and inanimate objects.”

He said inmates would also use their “out-of-cell time” to eat.

“This will mean that units or wings are divided to avoid a concentration of inmates and officials in open spaces.

“This measure does not abolish access to open air, which is mandatory for inmates.”

He said visits would remain restricted and that limits on the amount of goods inmates could buy from tuck shops had been increased.

“This will allow inmates to purchase items from the tuck shops, adhering to social distancing protocols.

“We have also ramped up toiletries that we provide to inmates so that offenders are not disadvantaged.

“It must be acknowledged that as the virus continues to spread in communities, correctional centres within the same localities will remain vulnerable.

“[The issue of] officials attending gatherings and movements from their residences to places of work is receiving attention, in addition to screening.”

On the official at the department’s head office who had tested positive, he said: “Offices, lifts and other areas have already been decontaminated.”

Ekurhuleni mayor Mzwandile Masina on Tuesday launched a food bank to provide relief to the poor during the Covid-19 outbreak.
Politics
1 year ago

Retshidisitswe Kotane, a medical graduate, could have been an unemployment statistic, having missed three graduation ceremonies due to unpaid fees, ...
News
1 year ago