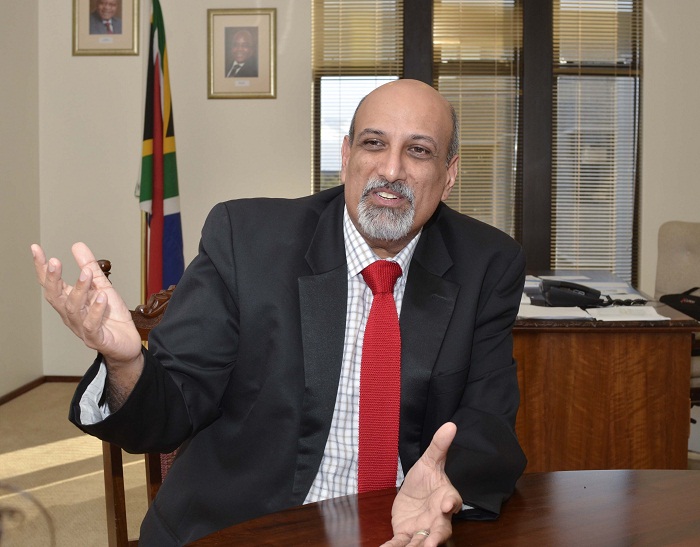 Prof Salim Abdool Karim says the spike in Covid-19 cases is a result of improved data from the roll out of the community health-care worker programme.
Image: TREVOR SAMSON

Prof Salim Abdool Karim, who has quickly become a household name in South Africa, is the government's chief adviser on Covid-19.

He impressed the country on Easter Monday when he laid out the government's strategy to tackle the coronavirus. On Friday morning, he gave a webinar through the Centre for the Programme of Research in SA, where he is a scientific director.

This is what he had to say:

Abdool Karim said positive laboratory results pertain to an infection that occurred, on average, two weeks prior. What we are seeing now in terms of the spike is a result of improved data from the roll out of the community health-care worker programme.

“The first two weeks of cases that we see after lockdown actually occurred before the lockdown. The third week of lockdown is probably our best indicator of infections that occurred straight after the lockdown,” he explained.

The initial drop was not because of the lockdown, but the declaration of a state of disaster which resulted in measures including schools being closed, physical distancing and restrictions on airports.

Prominent epidemiologist, Professor Salim Abdool Karim, who is advising government's response to Covid-19, said on Monday night that while SA had ...
News
2 years ago

He said this phase “had a marked impact that took our daily number of cases to quite a low level”.

“Now this week what we are seeing is the result of us initiating a community health-worker programme with more than a million screenings having taken place, he said.

“When you compare the number of cases in the third week to the second week, we are not comparing apples with apples. Now we have apples and oranges. It’s too simplistic a way to look at data just to focus on the spike,” he said.

Everyone is a 'sitting duck'

Abdool Karim said those who have taken this condition seriously and understand its reproductive rate of between two and three will know  the virus “has an edge over anything we could do in a population that has absolutely zero antibodies”.

“Everyone is a sitting duck. Everyone is at risk. You have to treat it as a condition that is going to affect everyone and you need to put in measures that deal with that kind of approach,” he said.

Other countries got it wrong

“If we want to really grapple with this particular virus, it is not a condition we should underestimate,” said Abdool Karim, adding that other countries had underestimated “the enemy”.

“As in the art of war, one of the biggest flaws is to underestimate the enemy. We should not do that with this virus,” he said. “Some people thought they could outwit this virus, that you didn’t need to really tackle it head on, and that you could either try to achieve herd immunity by allowing natural infection (particularly in young people in whom it is quite mild), or you take partial protection measures while allowing a spread to occur while protecting the elderly. Countries have tried those and have found those strategies haven’t really been effective,” he said.

How the World Cup in 2010 worked in our favour

“Nobody ever thought we would need to deal with something like this,” said Abdool Karim, adding that, at the very least, the Soccer World Cup in 2010 gave us an edge.

“At the Council for Scientific and Industrial Research (CSIR), we had put in place an amazing ops centre for the World Cup. It is a wall full of big television screens showing maps of the country, where police stations are and so on. What we now had to do was add data into the system of where the cases are."

That’s where the community health workers come in, using cellphone technology, he said.

“The community health-care workers have to enter information on a cellphone and it sends the locations to the ops room. The location pings at the CSIR. That is how we know where we have covered the country with our screening.

Abdool Karim said on all other aspects of the virus, the ministerial advisory committee made up of 51 experts had been “having conference calls with our colleagues in China” as they are “four months ahead of us”.

Those colleagues said in all the thousands of patients they had studied, only one had both HIV and Covid-19 and there was nothing to report, so that was not helpful to South Africa.

“We are going to have to study it here. Because our first wave occurred in a demographic that doesn’t have much HIV, we didn’t see much co-infection but in the second wave, we see co-infection,” said Abdool Karim.

Does the BCG vaccine help with Covid-19? The experts weigh in

South Africans have been holding out hope that the BCG vaccine, given to newborn babies in the country at birth, provides a degree of protection ...
News
2 years ago

The world will need more than one Covid-19 vaccine, GSK CEO says

The world will need more than one Covid-19 vaccine so drug companies must partner in the race to develop the weapons to fight the novel coronavirus, ...
News
2 years ago