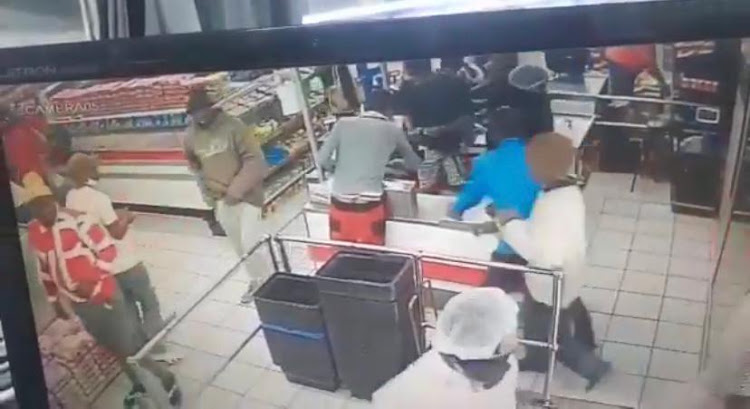 A mob stormed the butchery during violent protest in Mitchells Plain.
Image: Screengrab of video

Two people have been arrested after residents robbed a butchery in Mitchells Plain, Cape Town, during violent protests.

Two suspects, aged 29 and 33, were tracked down, arrested and charged with business robbery on Thursday.

They are expected to appear in court soon.

Potelwa said an investigation was continuing and more arrests were imminent.

The area was hit by protests after disgruntled residents took to the streets demanding food parcel deliveries. Roads were barricaded with burning tyres and rocks. Police made multiple arrests for looting and violence in Tafelsig and Gatesville.

Concerns are mounting about incidents of looting and vandalism at stores and schools across the country, TimesLIVE reported on Friday.

Since the lockdown, close to 200 schools have been vandalised, burgled or set alight. Liquor stores in Cape Town and surrounding areas have been looted.

News24 quoted a top police official on Friday raising concern about a potential sharp increase in crime and social unrest due to desperation over food supplies.

He [police minister Bheki Cele] is not ignoring it. But if we don't put out these fires quickly, it will get too big to control,” warned the official.

Several people were arrested and stores looted after protests over expected food parcel deliveries at Mitchells Plain in Cape Town.
News
2 years ago

Police in the Western Cape are helping bottle store owners who fear looters to move their stock to safer locations.
News
2 years ago