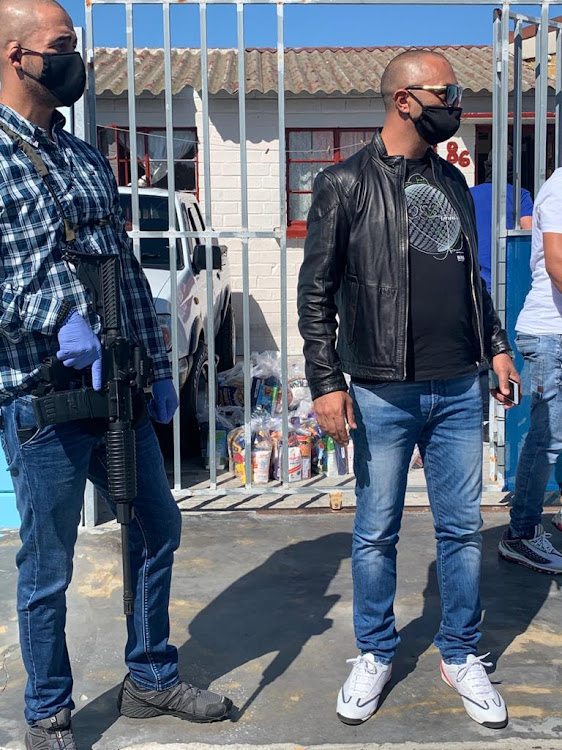 Alleged underworld figure Nafiz Modack and his bodyguard at a house in Eldorado Park where he handed out food this week.
Image: Nafiz Modack

They were born in crisis, moulded by it, and SA’s organised criminals are likely to thrive while many people are counting rands and cents to make sure they can afford to eat for the next two weeks.

According to experts from the Global Initiative against Transnational Organised Crime, underworld bosses are likely to exploit new opportunities as the double shock of the Covid-19 induced lockdown and post-lockdown recession rock the country, and the world, to its core.

Over the past few weeks in Mitchells Plain drug houses were visited by addicts carrying essential services permits, this according to TimesLIVE sources.

Tik (crystal meth) and other drugs were transported across the country, sometimes stashed in food parcels and medical supplies, and police officers were arrested for transporting alcohol which, along with cigarettes, and thanks to the banning of these products, have now also entered the catalogue of black-market items ripe for exploitation by criminal groupings.

One of police minister Bheki Cele's biggest headaches since the Covid-19 lockdown was announced is the growing spate of alcohol theft.
News
2 years ago

According to the Global Initiative’s senior drug expert Jason Eligh, SA's crystal meth or tik supply is unlikely to run out any time soon but that won’t stop drug dealers from upping their prices, and “adulterating” their drugs with other substances to reduce the purity.

He said that criminal organisations are adaptable and exploit opportunities as they arise and that globally there have been reports of illicit drug shipments hidden among medical masks and essential goods shipments.

He said that it is likely the ban on the sale of alcohol and cigarettes will also be exploited. This week the Daily Maverick reported that 11 police officers were arrested for allegedly trafficking alcohol.

And around the country, several arrests have been made in attempts to smuggle counterfeit cigarettes.

TimesLIVE report that President Cyril Ramaphosa on Friday defended the ban on the sale of alcohol saying that its use is proven to be linked to “an increase in violent crime, motor vehicle accidents, medical emergencies and results in full emergency rooms and hospitals”.

“In the face of a pandemic such as Covid-19, the experience of the rest of the world has shown us that hospitals need to be prepared to receive and treat vast numbers of Covid-19 patients and to quarantine them from non-infected patients,” read a letter sent by the president to the Gauteng Liquor Forum after its request to ease restrictions was denied.

“I wouldn’t be surprised at all to see an illicit alcohol and cigarette market pop up in SA — where the licit has become illicit just by the stroke of the pen by the government just by closing those facilities,” said Eligh.

“Like some illegal drugs, I mean alcohol is probably one of the most dependence-forming substances in the world, nicotine is also extremely addictive. So people who smoke and people who drink are not just going to stop smoking and stop drinking just because the shops are closed, they’re going to find other ways of sourcing their alcohol and their tobacco,” he said.

As in the rest of the world SA’s working-class suburbs are often associated with high levels of drug use and where there are drugs there are gangs.

The Global Initiative this week released its Crime and Contagion policy brief which looked at the organised crime response globally to the challenges and opportunities posed by the Covid-19 pandemic.

According to the paper, in cities in developing countries there were already reports of gang bosses using the crisis to boost their legitimacy and social standing in their communities and “by implication inviting partnerships with the state, and the social legitimacy that this, in turn, may bring them”.

“In cities of the developing world where gangs exercise a great deal of influence and territorial control, authorities have to manage situations where they are not the sole arbiters of governance and power,” read the paper.

“Gang leaders, who have an interest in maintaining their local legitimacy by protecting communities within their territory and being seen as the figureheads of power and stability in a crisis, may have a shared interest with government.

“The risk inherent in such strategies is that, in the long term, criminal figures become more entrenched in local governance and it becomes ever more difficult for the state to win back territory.”

On Thursday he became one of many figures associated with the underworld to feed people in SA’s poorest communities when he set up a soup kitchen outside his driveway.

Careful to sanitise his hands with surgical alcohol while preparing a 200 litre pot of beef and vegetable soup, Meyer told TimesLIVE that the government made it easy for people such as himself to win over the community.

“The government is allowing the people to look up to gangsters. We’ve been shooting at each other here for six months non-stop. Twenty people killed, families destroyed, many small children who were killed, then we come in and we make peace. No shooting, nothing’s happening. What does government do now? They sit back. The government doesn’t come into the community to take the kids and recruit them into sports teams or social programmes. You’ve got the talent let’s take the talented kids out of this place, but they don’t do it,” he said.

In one picture supplied to TimesLIVE Modack can be seen standing next to his bodyguard, who is carrying an assault rifle, while delivering essential goods at a house in Eldorado Park.

And throughout the week his “people” reportedly gave out cooked food in Manenberg, Bonteheuwel, Athlone and Mitchells Plain in self-publicised feeding events on his Facebook page, with photos accompanying the names of the suburbs they visited.

Community members showered him with praise in the comments section. In these communities, where hunger stalks families who have lost their income, he is becoming a saviour.

“Why does that lady go to that drug merchant asking for help? Ask her, because the politicians and government officials come when they want the votes, and when they’ve got their vote it’s all over,” said Meyer.

“You buy your community’s loyalty in a certain way. I’m not doing this for loyalty. You can go to any house here and ask them what they think of me. I grew up in this community, I was gone for 18 years (in prison) and I came back,” he said.

He claims that he is no longer involved in the trade of drugs but that he is still more privileged than most of his neighbours and that he feels it is his responsibility to feed the community and avoid a repetition of the scenes seen in other Cape Flats communities where shops were looted.

“The ripple effects of Covid-19 is hitting the poorest people, those who have to make sure every day they have something on the table, who have to take care of their kids. They don’t have contract work, they have to carry scrap around every day and bring something home,” he said.

In his area the supply of drugs has not been disrupted at all and, according to Eligh, in SA tik prices have remained unchanged at R300 per gram, while the price of heroin, which needs to be smuggled over the border, has increased by roughly 25%.

“We’ve got to be careful that the increase in drugs is not necessarily equated to a reduction in supply. And in the case of Covid-19 pandemic shock to the drug market around the world, there’s no question that drug supplies have not been impacted. Production continues of heroin and cocaine and cannabis around the world,” said Eligh.

“There’s not been a supply side shock in drug markets that would eventually lead to some sort of shortage. What we’re not seeing is necessarily a shortage of supply but we’re seeing a more conservative approach taken by dealers and distributors with the product that they have on hand already,” he said.

He said that normally the first reaction by drug dealers is to exploit the crisis by increasing drug prices, but as the lockdown progresses and lengthens they may turn to adulterating their current stock.

Unlike heroin which needs to be smuggled across the border, Eligh says high quality tik is produced in large quantities in SA, mostly by Chinese “cooks” using precursor chemicals, such as ephedrine, which are imported for pharmaceutical use from China.

When the crisis is over, and the purity of drugs improves, the risk of drug overdoses will also increase rapidly.

“Many people using methamphetamine and heroin tend to be the poorest of society. Many of them are homeless. A lot of them are suffering from other co-morbidities like HIV, hepatitis, tuberculosis, and these are the people who are unable to remain quarantined during the current crisis because they have nowhere to go or they have a habit, a dependency that they have to address, they’ve got to go out and get their drugs, otherwise they’re going to go through the horrors of withdrawal,” he said.

Global Initiative director Mark Shaw said the crisis might knock out the competition for some groups by eliminating less resilient players. But it could also help them embed themselves deeper into society.

“What a shock like this does is it strengthens people with a bit of capital, who can ride it out and who can invest. And what it will also do in the criminal world is it will remove less resilient players and embed those who are already embedded further,” he said.

Alcohol 'not an essential': Ramaphosa refuses to ease restrictions

President Cyril Ramaphosa has emphatically denied a request from the Gauteng Liquor Forum to ease the restrictions on the sale of alcohol during the ...
News
2 years ago

Experts believe the recent looting at shops and vandalism of schools are a mix of sheer criminal activity and people acting out of pure desperation.
News
2 years ago

On Wednesday afternoon, TimesLIVE filmed a man on top of an overhead mast in Bonteheuwel, Cape Town. In broad daylight, he was disassembling the ...
News
2 years ago