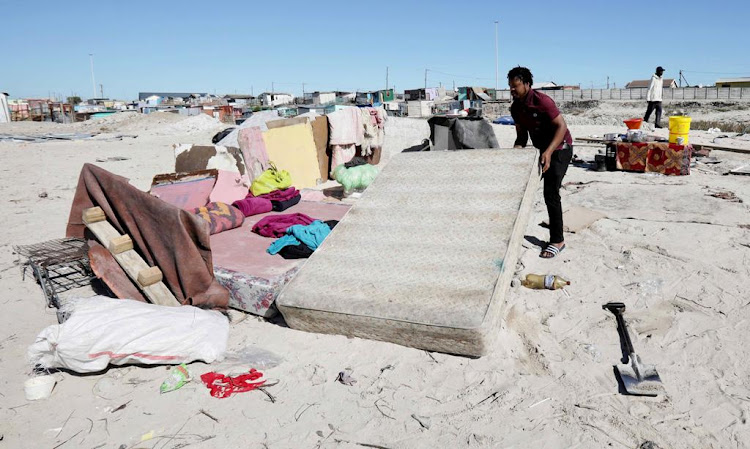 One of the 49 householders allowed to return to the Empolweni land piles up his belongings on April 20 2020.
Image: Esa Alexander

Community leaders in a Khayelitsha informal settlement accused a group of land invaders of exploiting their court victory over the city of Cape Town.

On Tuesday, police disrupted an attempted land invasion in Empolweni, where a large group of people were demarcating plots of land.

Police fired rubber bullets and teargas to disperse dozens of people. Behind them, 49 residents who are allowed to occupy the land under an interim order granted by the Cape Town high court on Friday, watched as the newcomers fled.

Amid the chaos, community leaders Zandisile Dekeda and Oscar Mtshixa were trying to gather information from the 49 people.

Community leader, Oscar Mtshixa, says the people being dispersed by the police are not part of the group who won a court order in the WC High Court. About 50 people were busy rebuilding their shacks, and living in temporary tents, when the new group of invaders arrived. pic.twitter.com/yWr1rV58IF

“There are two sides here. The one side was at the high court where it was approved that people can build their shelters here,” said Mtshixa.

“The other side are people who came from other sites. They are putting up shelters here but they have not been approved to build their shelters.”

Dekeda said they had tried in vain to reason with the newcomers.

“Those people are latching on to our process just to disrupt what we are doing,” he said.

On Monday, the city council said it had returned seized building material to the 49 households that were removed from the land last week during the lockdown.

The high court will consider the merits of the case after the lockdown.

“The city has delivered material to 49 householders who illegally occupied a piece of land in Khayelitsha so as to adhere to the interim court order for temporary relief to these illegal occupiers during the remainder of the Covid-19 crisis,” said a city council statement.

“The judge emphasised that the city is entitled to protect its land against land invasion and is allowed to remove any new illegally erected structures with immediate effect. The court ruled in its interim order that there was no breach of any regulations by the city.”

Malusi Booi, the mayoral committee member for human settlements, said the council was allowed to remove any illegal structure put up by someone who was not among the original 49 occupiers.

“Land invasions are illegal. The judge acknowledged this aspect and emphatically denounced land grabs,” he said.

“In fact, the Legal Resources Centre wanted 300 people to be ‘returned’ to the land. The judge made it clear 49 may return in the interim until the merits of the case are heard.”

Cape Town announced on Monday that it had returned seized building material to 49 households that were removed from municipal land in the middle of ...
News
1 year ago

Residents of Empolweni informal settlement whose homes were demolished by the City of Cape Town won a victory in the Western Cape High Court on ...
News
1 year ago

Human settlements minister Lindiwe Sisulu has condemned the evictions of people from informal settlements by the Red Ants in Gauteng, saying the move ...
Politics
1 year ago