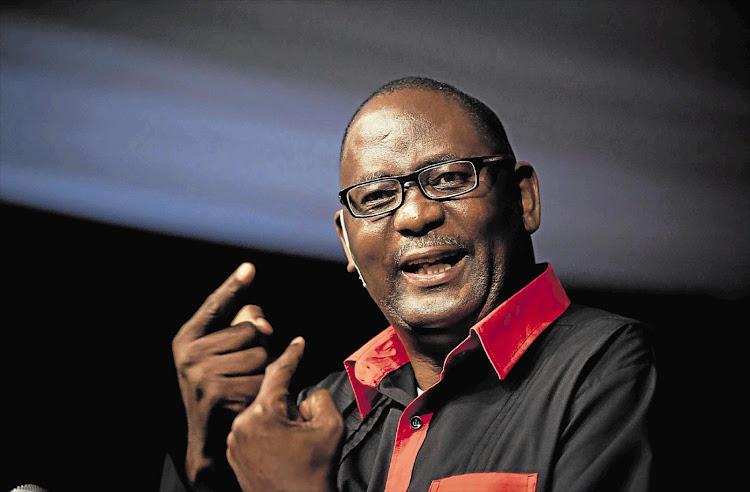 Zwelinzima Vavi says he will test for the third time on Friday after he was still positive for Covid-19.
Image: DANIEL BORN

Zwelinzima Vavi says he will be testing for Covid-19 for the third time after his second test results came back positive.

The SA Federation of Trade Unions (Saftu) leader was discharged from hospital two weeks ago after testing positive for the virus.

On Thursday, he shared on Twitter that he and his youngest son were getting tested for the second time, saying: “If we test positive still it would only mean that the virus has taken longer to die.”

Myself and last born did our second test this afternoon! Crossing fingers but confident! If we test positive still it would only mean that the virus has taken longer to die! Will tell you of the results! Doing my best to de-stigmatize #COVID

On Tuesday, Vavi told Jacaranda FM that he was still positive for Covid-19 after testing for a second time but was no longer showing any symptoms of the virus.

He said son, who tested positive in March, was now negative.

He added that his wife, who initially was negative, was now positive and will test again when they go together.

“I drank lots of water and rested for hours. I also drank lots of vitamin C and iron and have had a lot of garlic - never had to munch garlic in the manner I have been doing in the past few days and weeks,” said Vavi.

“Yet on the 14th day I went back, and I was still positive and it was sort of a little setback, but I was forewarned that it was possible and that the virus might refuse to go away and that I might need to go back if that happens, and I'll go on Friday.”

Eating garlic and ginger have not been listed as preventive measures against contracting the virus. Antibiotics also do not work against the virus.

According to the World Health Organisation (WHO), garlic is a healthy food that may have some antimicrobial properties. However, there is no evidence that it protects people from the coronavirus.

The best way to prevent getting the virus is to practise proper hygiene.

Take a look at Vavi's recovery journey below.

On April 14, Vavi shared on Twitter that he was taking vitamin C and chewing on garlic and raw ginger to boost his immune system.

"[I] also exercise to push the lungs a little bit but not too much,” he said.

Never had to munch so much garlic and raw ginger in my life! In addition been using lots of a Vitamin C and iron plus all manner of immune system booster concoctions! Also exercise to push the lungs a little bit but not too much!! #CoronavirusinSA pic.twitter.com/hEvBlHElXd

In a video on Sunday taken at his home, Vavi shared the news of his test results.

“I received my results and unfortunately for me, they are still positive,” he said.

“Luckily for my son, he is now negative. I would of course like to be negative like everybody else but I was forewarned by [health minister] Dr Zweli Mkhize that [recovery] depends on how big the impact of the coronavirus was on your body.”

Zwelinzima Vavi in 'positive spirits and will be home today'

Labour movement leader Zwelinzima Vavi is in "positive" spirits and will be released from hospital soon.
News
2 years ago

Zwelinzima Vavi landed in hospital on Sunday after complaining about chest and lung issues.
News
2 years ago

Prayers for Zwelinzima Vavi as coronavirus lands him in hospital