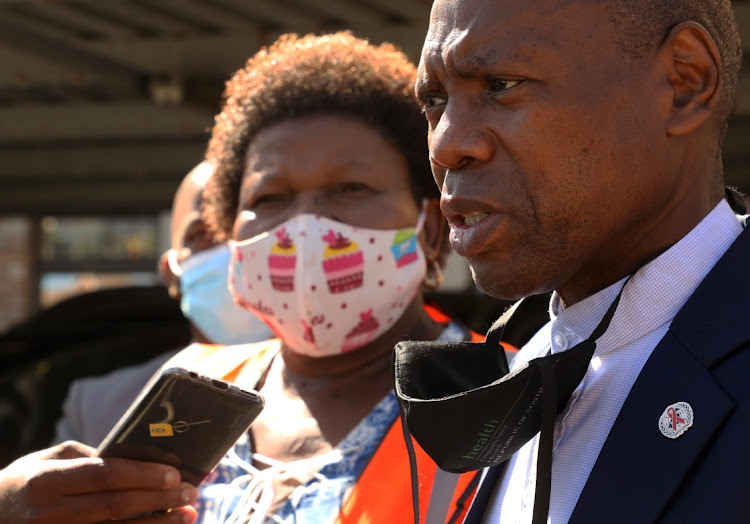 Furious with the Eastern Cape government’s handling of the Covid-19 pandemic in Nelson Mandela Bay, health minister Zweli Mkhize has taken charge by sending a senior director to lead the tracing, screening and testing teams in the city.

He also read the riot act to health MEC Sindiswa Gomba and her administrative staff in a meeting behind closed doors in Port Elizabeth, according to three insiders.

This followed a presentation by Dr John Black, head of the infectious diseases and HIV unit at Livingstone hospital, who painted a bleak picture of a department that is hopelessly ill-prepared to deal with the virus.

Among the challenges were that hospitals were full, there was a dire shortage of staff and an urgent need for personal protective equipment (PPE) for health staff.

Glen Grey Provincial Hospital nurses have refused to help coronavirus patients who were rushed from Cala to the hospital in Cacadu at the weekend.
News
2 years ago

As SA's lockdown took effect over Covid-19, homeless people around the country were rounded up and placed in shelters. For many, the lockdown meant they were forced into sobriety from their drug addiction. A medical team, lead by local doctor Mohammed Siddique Tayob, is helping to treat those struggling with their addiction in Middleburg, Mpumalanga.

Mkhize, who was in Nelson Mandela Bay on Wednesday, said the deployment of deputy director-general of health Litha Matiwane was necessary as the province’s figures simply did not add up.

He said the number of Covid-19  deaths in the province versus the numbers listed on the national database did not match.

With Nelson Mandela Bay's official infection rate sitting at 167, and with six deaths, Mkhize — who announced the updated figures after the meetings — believes the numbers are vastly understated.

“He said you can’t have six deaths and that infection rate. The number of infections should be in the 600s. It means that not enough testing is being done,” said one insider.

“Dr Mkhize immediately ordered one of the senior staff in his department to remain in the metro and take charge because there is a feeling that the doctors in the metro are on their own — the provincial health department has not been coming on board.”

Mkhize said Matiwane would be deployed to the metro, where he would be responsible for providing leadership and pulling together a strong, coherent response to be followed by the teams undertaking tracing, screening and testing.

A metro insider said the doctors at the state hospitals often turned to the municipality for help with supplying personal protective equipment because there appeared to be a lack of urgency from the bosses in Bhisho.

“Dr Black indicated that there are big problems in terms of vacancies in key positions. They don’t have the staff to man those quarantine sites that are being set up. You can’t set something up and there is no-one to take charge of it,” said the insider.

“He really painted a bleak picture that if things are not changed drastically, we are in trouble as a city.

Soldiers will now move beyond just enforcing the lockdown regulations on the streets, with the additional personnel set to screen people at ...
News
2 years ago

“The fact that the hospitals are going to the municipality for PPE is telling. Dr Black said they are reusing gowns, instead of tossing them away after use. They are trying to wash them but the machine to wash the gowns is broken.”

He said Black had told them about two children, aged nine and 11, who had been orphaned after Covid-19  killed their parents, both under 50. “They are left with a 23-year-old, who is also infected,” he said.

“This is the cold face of Covid-19 in the city.

“A family in Walmer township — there are six to eight people in one family who are infected.”

A second insider said Gomba and her team had been lambasted by Mkhize as there appeared to be no-one really in charge in the metro.

“The hospitals are already operating at maximum without Covid-19, and with assumptions that the cases will increase, it’s going to get worse. The minister needed to hear it and the provincial team needed to hear it,” said the source.

“The province has been very slow in coming forward and doing things. There doesn’t appear to be much interest from the health administration. The infections figure is probably horribly understated — the minister brought it up himself.”

Mkhize announces there have been 167 cases in the Metro and six deaths #Covid_19 #Covid19SA pic.twitter.com/UfYheDHTmT

A third insider said there was a feeling of unhappiness from the national officials about the number of reported cases. The source said Mkhize had said the number was not a true reflection of the reality.

“The minister decided on the spot to send three more vans to the metro,” said the insider. “The numbers in Nelson Mandela Bay will increase drastically in the next week or so because the national team believes more people are positive but we’re just not getting to them.

“Another thing that was brought up was the many vacancies here and the filling of those vacancies.

“Nelson Mandela Bay has no coherent leadership, so this has also hampered its response to Covid-19.”

Speaking outside the South End fire station after the meeting with Gomba and acting mayor Thsonono Buyeye, Mkhize said: “In my own reading of the numbers, I have a feeling we need more testing because we’ll probably find more people with Covid-19.

“The number of deaths and reporting do not match. It gives the impression we need to do rapid screening and testing so we can discover the full extent of the prevalence of infection in this area.”

In East London on Tuesday, Mkhize said a team of 10 epidemiologists had been called in to help the provincial government deal with the pandemic.

In Port Elizabeth on Wednesday, he said: “I believe the team that has come from the national office is going to give us a coherent strategy on how to manage the infection, the outbreak, from district to district. I believe we’ve been able to make an adequate intervention to unlock movement and containment in this area.

“They need to reinforce teams that are going out to do community screening [and] reinforce testing, so there’ll be additional vans coming from the NHLS [National Health Laboratory Service] to this area to be able to improve capacity for testing.

“All this means the number of people who are positive may well increase.”

Mkhize, who was meant to visit a Volkswagen SA field hospital as well as screening and testing sites in KwaDwesi and Zwide, could not do so because of the prolonged meetings he held with health experts and municipal and provincial officials.

Some residents of Port Elizabeth threatened protests and to disrupt the Nelson Mandela Bay Municipality from distributing food parcels to informal ...
News
2 years ago

He acknowledged that some of these contacts would not be able to self-isolate at home because they lived in densely populated areas.

“MEC Gomba has reached out to Nelson Mandela University (NMU), which has offered 800 beds to absorb most of these contact individuals so they can move out of their densely populated areas,” he said.

Mkhize said the provincial government needed to accelerate some of its programmes, such as filling critical vacancies and hiring unemployed graduate nurses from the Lilitha nursing college.

Gomba said she and premier Oscar Mabuyane had met the university to discuss ways in which they could work together.

University spokesperson Zandile Mbabela said: “We are exploring a number of initiatives as part of the university’s response to the local and provincial fight against Covid-19.”

Two staff members at a Pick ‘n Pay at Alex Mall in Alexandra, north of Johannesburg, have tested positive for Covid-19, the mall’s management ...
News
2 years ago

As the number of confirmed Covid-19 cases increase in Nelson Mandela Bay, the dam levels continue to decrease — sitting at a combined level of 23.77% ...
News
2 years ago