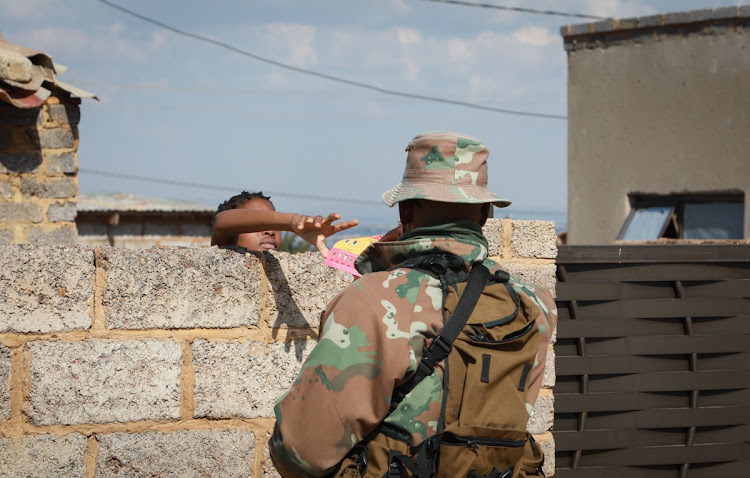 Soldiers have spoken about the dire conditions which leave them heartbroken while conducting lockdown operations in densely populated areas where poverty is rife.
Image: Sebabatso Mosamo/ Sunday Times

Witnessing heartbreaking poverty and asking your own children to sacrifice hugs, birthday presents and mom time: that's what a soldier on patrol in Gauteng is coping with.

Capt Lwazi Malgas said her job in the military requires her to educate and instruct citizens to heed the call to stay at home to contain the spread of the coronavirus, and it is emotionally taxing.

She was part of a deployment to Soweto this week, where another officer was seen giving R50 to a Dobsonville man who was scratching through rubbish containing rotten vegetables to find something to eat.

“We are humans too,” the officer said.

Malgas said they are being exposed to situations that leave them “heartbroken”.

“Some of us did not grow up in rich homes. We know what it’s like to be poor. Patrolling in some of these streets takes us back and reminds us of our difficult upbringing,” she told TimesLIVE. 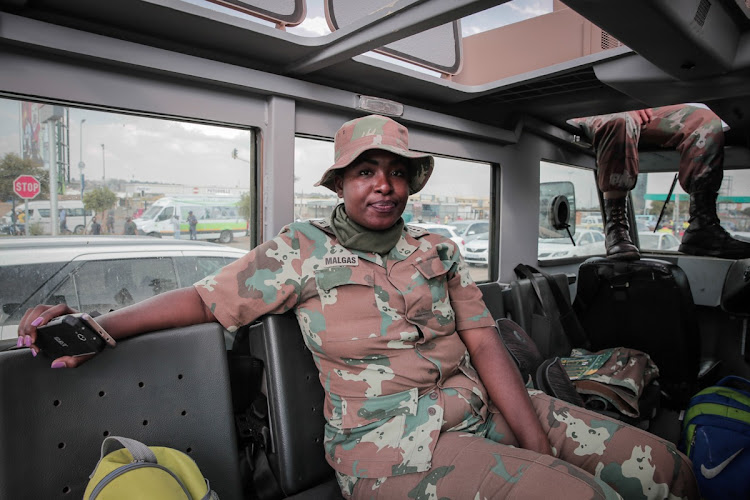 Captain Lwazi Malgas is sacrificing hugs with her children and missing out on celebrating both her wedding anniversary and her son's birthday this week as she is on duty for the SANDF to enforce Covid-19 lockdown safety protocols.
Image: Sebabatso Mosamo/Sunday Times

Malgas, who was born and bred in a small township in Cape Town, joined the army 17 years ago.

In 2005, she went on a peacekeeping mission to Burundi, which she described as scary, heartbreaking but also fun.

She described her latest deployment to Alexandra, Diepsloot and Soweto as one of the most difficult she's encountered.

This is because of the awful living conditions they are witnessing. These include child-headed families, people crammed in shacks and those who are out on the streets, looking for food.

“We can’t stay at home. We’re hungry,” the soldiers are told.

We are human - women, mothers, fathers - before we are soldiers

She recalled seeing an elderly man eating from a rubbish bin during one operation, but she was unable to assist because she did not have cash and there wasn't an ATM nearby for her to draw money.

“The man was probably in his 50s. It was heartbreaking and disturbing to see. The human element of the job is tough. It leaves an emotional toll on a lot of us in different bases.”

The mother of two said she and her colleagues have started a collection drive, asking for cash donations from other members to try to assist those who are needy.

“Food runs out quickly during this period. For the unemployed, for those who survive on grants or rely on day-to-day work, it is even harder. You wonder how they survive,” said Malgas. 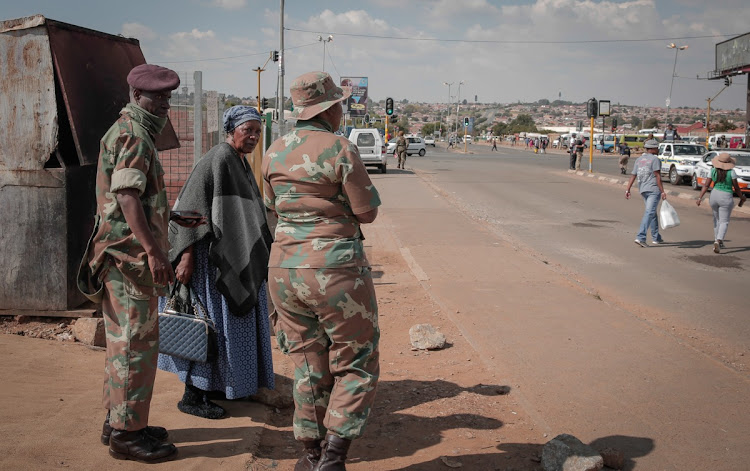 An elderly woman in Dobsonville, Soweto, says "God bless you, my children" after members of the SANDF offer to drive her home when she could not walk due to fatigue
Image: Sebabatso Mosamo/Sunday Times

While soldiers were hard at work implementing lockdown regulations in Dobsonville on Thursday, TimesLIVE saw many who did not hesitate to lend a helping hand to the elderly.

Malgas and another officer stopped an elderly woman who was struggling to walk home after fatigue kicked in following her trip to the Dobsonville shopping mall. They asked her to wait on the side of the road while one rushed to get a military car to drive her home.

“God bless you my children,” the elderly woman said.

Malgas, who is married and has relocated to Pretoria from the Western Cape, said her life had changed drastically since the start of the pandemic.

“Our children are no longer allowed to run to us for kisses or hugs when we return from work. At first they did not understand, but they now do,” she said.

Malgas said she has mom guilt.

She said she usually takes leave to celebrate her son’s birthday with him, and her wedding anniversary, which are both celebrated this week, but could not do so this year.

When she returned home on Thursday, her son was waiting to see what his mother had bought as a present this year, but he received nothing because shops are closed.

Like many other essential services workers, Malgas said some soldiers fear contracting Covid-19, and they wonder if their families are safe back in their respective provinces.

“We are human - women, mothers, fathers - before we are soldiers.”

However, she said she and her colleagues will not give up their jobs to serve their country.

A butchery based at the Baragwanath taxi rank in Soweto was shut down on Thursday after the discovery of rotten meat, expired sauces and ...
News
1 year ago

'We stepped up when things got tough': proud soldier pens heartfelt message

Pretoria-based soldier Lerato Afrika penned an open letter reminding South Africans that troops have a vital role to play and are not “uneducated ...
News
1 year ago

Soldiers will now move beyond just enforcing the lockdown regulations on the streets, with the additional personnel set to screen people at ...
News
1 year ago