'This will wipe us all out': Shock as 40 test positive for Covid-19 in tiny village 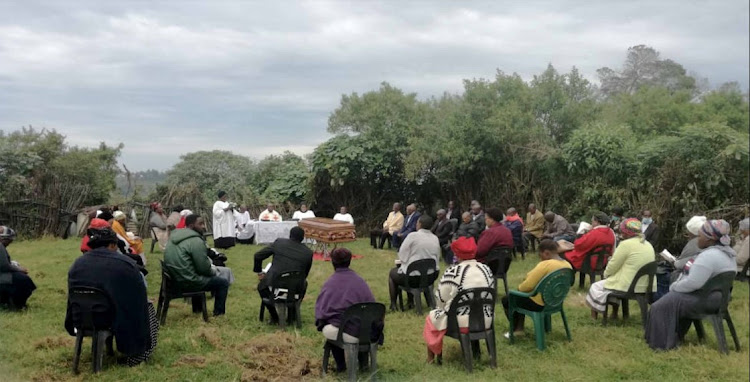 With funerals under the spotlight for high risk, a funeral organised by Chief Mangaliso Bokleni in Libode displayed exemplary social distancing.
Image: SUPPLIED

Forty people in a tiny Port St Johns village in the Eastern Cape have tested positive for Covid-19, but villagers — including some of those who are infected — do not seem to care.

The chaotic situation in Machibini village, where there is virtually no policing or army boots on the ground, is threatening to realise the health authorities’ worst nightmare about a virus explosion in the province’s rural areas.

The 40 infected people are linked to the infamous Majola village funeral of March 21, either directly or indirectly, through carriers transmitting the virus to others. The outbreak forced the closure of Majola Tea Estate, one of the biggest employers in the area, on Thursday afternoon.

A total of 778 people have been screened and 560 tested in the area, of whom 40 were confirmed to be positive for the virus, reports DispatchLIVE.

Health department spokesperson Sizwe Kupelo confirmed the source of the crisis was the Majola village funeral in March. “We want to urgently flatten the curve of the virus in Port St Johns,” Kupelo said.

Yet despite the situation, some villagers continue to walk around as if the pandemic does not exist and some of those infected are refusing to self-isolate, or go into quarantine or hospital.

This was confirmed by local traditional leader Nolundi Meji. “We are now sitting with 40 positive cases of this virus and the number will increase. Even those who have been found to be positive are roaming the streets and making contact with other people,” she said.

To make matters worse, she said, there was no law enforcement on the ground. She said she had done all she could to educate people about the dangers posed by the virus.

“I have done as much as I can do to save my people from this outbreak with the little knowledge I have as a traditional leader, working with health care workers from the health department.

This is disaster, this is catastrophic, this will wipe us all out in Majola

“This is disaster, this is catastrophic, this will wipe us all out in Majola,” Meji said. Meji oversees 11 Majola villages, of which three others — Ntsimbini, Mgcini and Elutwatweni — had positive cases,” she said.

She said law enforcement agencies should act immediately. “They must not wait for a death before they know the gravity of the situation we are in,” Meji said.

Questions were sent to national police spokesperson Brig Vishnu Naidoo to check if there had been an increase in police visibility in rural areas or villages, and if additional police officers and resources had been allocated to rural police stations. No response had been received from Naidoo at the time of writing.

This is the same area where six members of one family tested positive for Covid-19 after attending the Majola funeral, which was also attended by people who had travelled abroad. Another family is now also badly affected, with four members testing positive, DispatchLIVE has established.

Meji said subsequent to the March 21 funeral, three more funerals were attended by villagers on March 28 and April 4 in Machibini village.

There is a crisis going on. The numbers are increasing and many people have still not tested.

“There is a crisis going on. The numbers are increasing and many people have still not tested,” said Dudumayo.

He called on government to use all the powers at its disposal to ensure people were isolated or quarantined. “The government must move with speed as the case in Majola puts many villages in and around Port St Johns under threat of another Covid outbreak,” said Dudumayo.

“People are not listening to what government is saying regarding the new regulation of funerals,” Makiwane said. “We had a funeral in Port St Johns and our clients demanded all sorts of things that aren’t allowed at this time. That family had many people at the funeral. They demanded tents and they wanted the body to be taken inside the house, which is not permitted by law during this time of Covid-19.”

People are not listening to what government is saying regarding the new regulation of funerals.

Meth’s spokesperson, Ayongezwa Lungisa, confirmed the closure. “The MEC was already set to visit the estate and the management was accordingly notified. But the visit had to be postponed. On Thursday, the estate completely closed operations,” said Lungisa.

He said despite the estate employing people from the Port St Johns villages, no-one had tested positive. Meji claimed people who had tested positive for the virus had been turned away from St Barnabas Hospital in Ntlaza on Thursday, and were only admitted on Friday.

But Kupelo said: “This allegation is not true. People who were linked to Majola were put in isolation at St Barnabas Hospital. Now the hospital has a total of seven patients linked to the Majola funeral.”

Two people who work at the funeral parlour that conducted the doomed March 21 funeral in Majola village, Port St Johns, have tested positive for the ...
News
2 years ago

Despite the delivery of more than 4,000 water tanks to assist drought-stricken communities during the lockdown, people in some parts of OR Tambo ...
News
2 years ago