Potatoes and avocados are cheaper 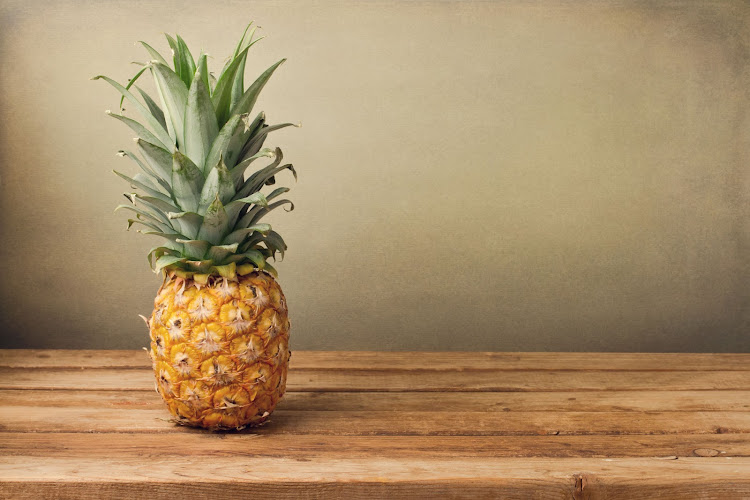 Demand rises for the spiky fruit as people brew pineapple beer at home during the Covid-lockdown ban on alcohol sales.
Image: maglara/123RF

Home brewing during the Covid-19 ban on alcohol sales pushes up the price of pineapple, while potatoes and avocados are cheaper.

Four weeks into lockdown and without a rotisserie chicken in sight, South Africans are reconnecting with their kitchens. But it’s not demand for humble ingredients such as potatoes, garlic or onions that is rising exponentially, but rather pineapples.

This is probably not because homebound South Africans have a hankering for a Southeast Asian-inspired stir-fry or even a (deeply underrated) Hawaiian pizza. Rather, the right combination of pineapple, sugar and yeast can result in an alcoholic brew with a kick — something consumers are craving amid prohibition.

The numbers speak for themselves.

, On the the first day of the nationwide Covid-19 lockdown in March, the Johannesburg fresh produce market sold 10,000 pineapples or so. On April 6 and 7 — a few days ahead of the Easter weekend — 60,000 pineapples were sold, reports BusinessLIVE.

Then this past Monday, volumes skyrocketed to 90,000 pineapples on the day.

Jaco Oosthuizen, CEO of RSA Group, a fresh produce sales organisation, says the Covid-19 pandemic and the nationwide lockdown has had some effects on the fresh produce markets — as observed in the pineapple price — but this is simply the free market at work.

For example, the price of large potatoes that would have normally gone into the restaurant and takeaway industry to make slap chips dropped off with lower demand.

Avocados, too, are looking cheaper now that the local production season has begun and big buyers such as sushi restaurants remain shut.

The effect of events on fresh produce markets is immediate, Oosthuizen said.

“You find, immediately when you see a lack of demand, prices will adjust accordingly. Industry response can be just as swift and farmers may decide to delay harvesting where practical, or buyers will stock up and offer specials to consumers,” he says.

Now that the government has reopened informal trade, with the required permits, it is hoped sales and prices on many of these products will recover.

The prices of fresh produce are dynamic for an obvious reason: what you don’t sell, you throw away.

In SA, wastage of fresh produce on markets is less than 1% and consists of product that is unfit for human consumption.

“There is always a market or a buyer for product at the right price,” Oosthuizen added.

This scenario is very different to those in other parts of the world, such as the US, where the Covid-19 measures have forced farmers to plough tonnes of perfectly good vegetables back into their fields. In their dairy industry too, producers are smashing eggs and dumping thousands of litres of milk into manure pits.

Oosthuizen further added that this might be because US chain stores and the hospitality trade are dominant and only take a certain grade of product. In SA, the system is robust, and competitive procurement by retailers is complemented by the fresh produce markets, meaning there is a market for all grades of product.

Chris van Dijk, CEO of the Milk Producers Organisation, agrees that US producers have not been able to shift the unprocessed milk quickly enough to another place. SA’s milk production is not at its peak at this time of year, but even so Van Dijk said that the industry would do its utmost to ensure wastage is prevented.

“It’s a sin to take a good-quality product and dump it. One should be locked up for that” .

Cheese inventories at certain processors have been affected by the closing of pizza and burger outlets during lockdown. And milk that would ordinarily have gone into making new cheese has been shifted into fresh or long-life milk plants. Some processors stuck with a lot of inventory even dropped cheese and milk prices to move the stock.

Surplus is not an issue, but could SA be at risk of a food shortage?

Omri Van Zyl, executive director at Agri SA, says the country is fortunate to have a functioning food system and is a generally food-secure nation. A bumper maize crop is expected in 2020 and will make the food chain cheaper, he said.

Van Zyl does, however, expressed concern about the medium- and long-term effect of the pandemic. Farmers who import chemicals and seed will not escape the effect of the weak rand, though for now there is some reprieve on the fuel side as the oil price remains low.

The biggest concern is the economic fallout and stressed consumers. Van Zyl added that some of SA’s poorest citizens spend 65% of their income on food. Many farmers and workers will be at risk if the economy doesn’t revive soon, he cautioned.

Post-coronavirus, Van Zyl added that there will need to be investment in the agriculture sector to get the economy going.

“That means we need to provide security of tenure and clarity about expropriation without compensation. Without that, no-one will invest in agriculture.”

ANC MP shut down during virtual meeting for joking about booze

If you're having withdrawal symptoms due to the alcohol ban, you're not alone: even our lawmakers are struggling to control their thirst.
Politics
2 years ago

How to easily brew your own beer using pineapple, ginger or sorghum

Many of us are holding thumbs that the lockdown ban on booze sales will be lifted at some point. In the meantime, here are four simple recipes to ...
Lifestyle
2 years ago