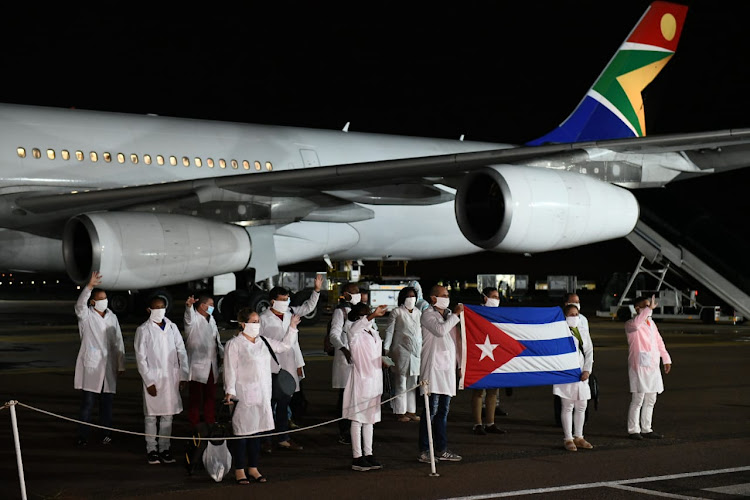 Cuban health specialists arrived in SA on Sunday to support efforts to curb the spread of Covid-19.
Image: GCIS

The arrival of over 200 Cuban medical doctors in SA is set to cost the country hundreds of millions of rand.

In documents seen by Business Day, projected costs for a medical brigade of 187 Cuban personnel was R440m. An even bigger contingent arrived in SA on Sunday, consisting of 217 personnel, the publication reported.

The documents showed that the average cost of the Cuban medical brigade was projected at R2.35m a person.

The department of health did not respond to questions sent by Business Day at the time of publication.

On Tuesday evening, health minister Zweli Mkhize said the Cubans were not in the country to steal the jobs of SA doctors, but would serve as a reinforcement given their special medical skills.

“They are coming to add on what SA human resources are, so it is important to say that the Cuban doctors are coming at our request to reinforce because they have particular strengths.

“We welcome the Cuban doctors and want to assure everybody they will not take anybody's post. They have come to assist us and they will be working alongside South Africans,” he said.

Mkhize said the doctors will work in the Covid-19 hotspot provinces with 29 in Gauteng, 28 in KwaZulu-Natal and 26 in the Western Cape.

The SA Medical Association (Sama) on Tuesday expressed concern over the arrival of the Cuban medical team.

Coetzee said there were many retired doctors in the country that could have played a key role in mentoring younger doctors during the outbreak.

Sama told Business Day that a public sector registrar or mid-level medical officer, comparable to a Cuban family physician, commands a salary of about R1.2m a year.

The BBC reported last year that more than 30,000 Cuban doctors were working in 67 countries, many in Latin America and Africa, but also European nations including Portugal and Italy.

Quoting a report by Prisoners Defenders, a Spain-based NGO that campaigns for human rights in Cuba, the BBC said the doctors on average received between 10% and 25% of the salary paid by the host countries, with the rest being kept by Cuba's authorities.

The South African Medical Association (Sama) says the arrival of over 200 medical specialists from Cuba is a “little bit premature”.
News
2 years ago

The National Association of Democratic Lawyers has welcomed the arrival of "highly skilled and specialised doctors" from Cuba.
News
2 years ago

Health minister Zweli Mkhize has provided details of how the specialist doctors from Cuba who arrived in the country on Sunday will be deployed ...
News
2 years ago