The National Society for the Prevention of Cruelty to Animals (NSPCA) has condemned the actions of a wildlife sanctuary owner who allegedly punched a lion cub.

Dean Schneider, who quit his job as a Swiss financier to open the private sanctuary in South Africa which he showcases on Instagram, was filmed during the incident.

The Daily Mail published the footage, taken last year, on Friday. It quoted a spokesperson defending Schneider, saying he needed to "communicate his boundaries".

"Dean has a deep love for his animals and wildlife in general and would never use unnecessary force of any kind," the spokesperson said. 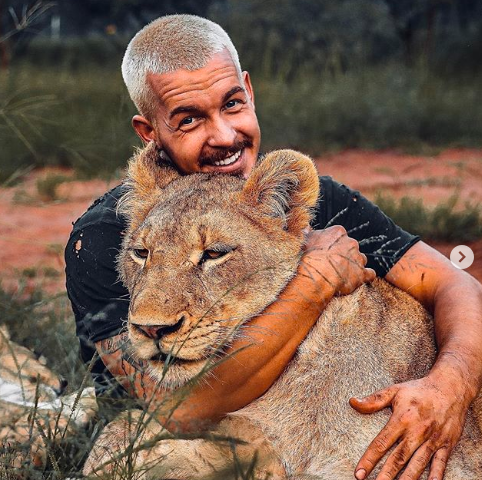 Douglas Wolhuter of the NSPCA wildlife protection unit told TimesLIVE the punishment meted out to the cub, which appeared to have scratched Schneider, was "abnormal and excessive".

"We are aware of many attacks by assumed tame lions on people. The latest known case was the tragic death of Swane van Wyk.

"The short video clip we have seen shows a cub seemingly stretching out, which is a common and natural action. The reaction from Mr Schneider was, in our view, completely abnormal and excessive.

“Although we are aware that in the wild, lions do mete out corrective actions on members of the pride, the situation in which the cub was placed  is in every sense an unnatural interaction. In this sense, the action taken by Mr Schneider is unnecessary and cannot be condoned,” Wolhuter said.

The video clip showed Schneider lying down with the cub. After it reached out to him, he allegedly punched it.

The Instagram celebrity refers to his facility, Hakuna Mipaka Oasis,  as a private sanctuary which is not open to the public.

“Currently in South Africa, there are thousands of captive lions in facilities across the country. South Africa is in desperate short supply of reputable sanctuaries for these large carnivores.  The NSPCA has accredited only a few sanctuaries due to strict criteria. These include no breeding and very limited interaction with the animals," said Wolhuter.

In the Sabi Sands area of the Kruger National Park it is a case of survival of the smartest animal.
Lifestyle
2 years ago

The Big Five of virtual safaris: take a relaxing bush break during lockdown

Sanet Oberholzer tunes in for one of virtual tourism pioneer WildEarth's live-streamed game drives, plus rounds up other online animal encounters to ...
Lifestyle
2 years ago

No fairytale end for lion cub snatched by baboon

There will probably be no happy ending for the lion cub that a male baboon snatched from its hiding place in the Kruger National Park on Saturday.
Lifestyle
2 years ago