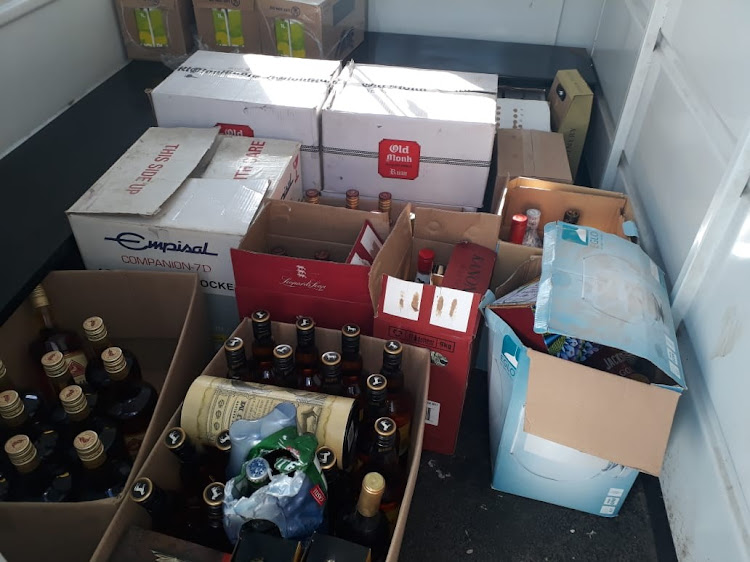 Some of the liquor seized by police in Kraaifontein.
Image: Supplied

Police in Kraaifontein near Cape Town arrested a 46-year-old woman on Thursday for possession of presumed stolen property, dealing in liquor and drugs as well as the contravention of the Disaster Management Act.

“The suspect was arrested after an intelligence driven operation led members to Buiten Crescent, Scottsdene, Kraaifontein, where more than 1,300 bottles of liquor were confiscated worth about R200,000. Tik and over R40,000 in cash were also seized,” said Western Cape police spokesperson Col Andrè Traut.

In an unrelated matter on the same day, Kraaifontein members arrested a 35-year-old male for selling cigarettes in contravention of the Disaster Management Act in Brighton Road, Kraaifontein. More than 2,000 packets of cigarettes and almost R2,000 in cash  were confiscated, Traut said.

He said the suspects are both scheduled to make court appearances on Monday.

There have been 174 burglaries at bottle stores, taverns, shebeens and alcohol warehouses across the country since the beginning of the lockdown on ...
Politics
1 year ago

Alcohol and cigarettes will not be allowed under level 4 restrictions, Nkosazana Dlamini-Zuma said on Wednesday night.
News
1 year ago

WATCH | Liquor worth more than R60,000 stolen from Tops in Free State

Thieves have made off with alcohol worth more than R60,000 from a Spar Tops in Botshabelo, Free State, police said.
News
1 year ago