Cops not so stoked as beached surfers launch waves of protest 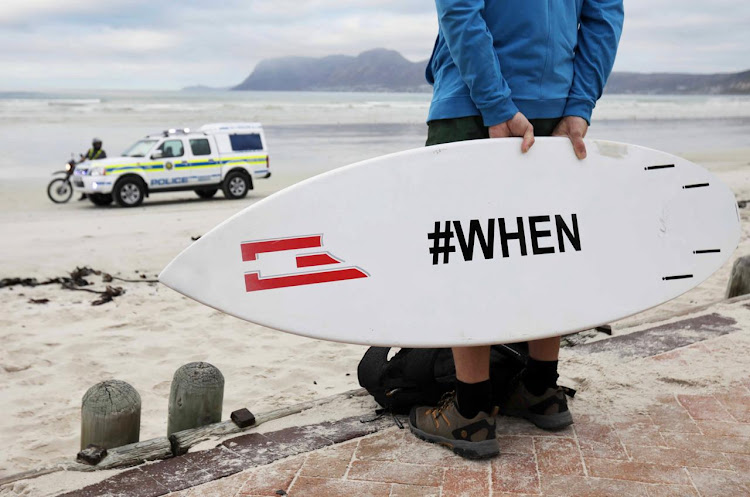 One of the surfers protesting in Muizenberg, Cape Town, on Tuesday keeps an eye on a police vehicle on the beach.
Image: Esa Alexander

Police broke up a peaceful protest by surfers on Muizenberg beach in Cape Town on Tuesday, arresting protesters and even chasing a man on a bicycle.

Police spokesperson Brig Novela Potelwa said two men, aged 52 and 65, were arrested after a group of about 30 people descended on the beach suburb and demanded the right to surf during lockdown.

Surfers held their boards at their sides and stood on the beachfront promenade two metres apart. Some used their boards as placards with messages scrawled on the underside, while others spoke to journalists about their frustrations.

Police arrested two protesters in Muizenberg during a peaceful protest by surfers against the lockdown restrictions.
News
1 year ago

Veteran surfer Sandy Hoffman, wearing her wetsuit, said surfing was healthy exercise that should be promoted in the context of a global pandemic that preyed on people with ailing immune systems.

“I am over 60 and obviously want to work on my immunity. This is flu - it is likely you will get flu," she said.

"I think any form of activity that is solitary should be allowed. There is no way you can pass on the virus when you are surfing. The whole thing about lockdown should be about health. Health and human rights go together.”

Surfer Ash Basey appealed to the government to relax the restrictions on recreational ocean sports.

“I would like to ask the government to allow us to surf because it is no more risky than everybody walking together on the road,” he said.

One surfboard placard questioned why two of the three triathlon sports were allowed – running and cycling – but not swimming.

Police at the scene warned protesters not to stand still as this was in contravention of lockdown regulations. When the protesters did not comply, some were led away.

An argument between officers and a cyclist ended with the cyclist fleeing, with cops in hot pursuit.

Last week a "surfer rebellion" in nearby Kommetjie ended with several surfers collared by law-enforcement officials waiting on the shore.

Justice minister Ronald Lamola on Monday explained the government's much-criticised decision to introduce a nine-hour lockdown curfew and a ...
Politics
1 year ago

'Moving to level 4 was a huge mistake': Twitter weighs in on lockdown behaviour

Under the level 4 coronavirus lockdown rules South Africans are allowed to exercise, but only within a 5km radius of their homes.
News
1 year ago

The Covid-19 lockdown moves into unknown territory this week, with 1.5-million people going back to work as the government's strict social distancing ...
News
1 year ago