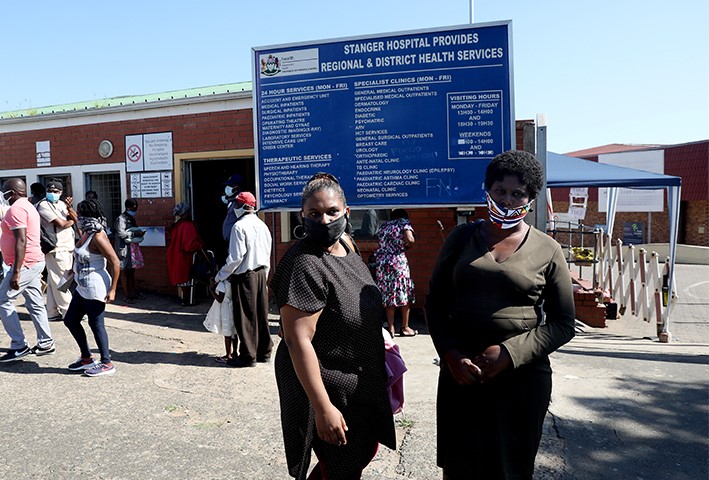 Worried mothers Kahatija Mamsoor and Zanele Nhlangothi outside the General Justice Gizenga hospital in KwaDukuza, which is not accepting new admissions after a Covid-19 outbreak.
Image: Sandile Ndlovu

Kahatija Mamsoor queued outside General Justice Gizenga Memorial hospital in KwaDukuza on Tuesday to plead with staff to allow her to see her seven-year-old daughter after the KwaZulu-Natal facility shut following a Covid-19 outbreak.

The hospital was closed for admissions on Monday after 16 people - nine mothers, two babies, four doctors and a nurse - tested positive for Covid-19.

On Tuesday about 100 people queued outside to get their medication.

Mamsoor took her daughter to the hospital just hours before the facility closed, after she suffered from what appeared to be a stroke.

"The doctor said she was not sure what happened to her because they were supposed to do a CT scan this morning, but she is not sure whether they did it and I can't see her. I can't give her anything," she told TimesLIVE.

Another KZN hospital closes as 19 test positive for Covid-19, including two babies

A hospital in Stanger, north of Durban, has closed its doors to new patients after 19 people tested positive for Covid-19.
News
2 years ago

Thandi Thabethe, who is 53, was arrested in Dobsonville, Soweto, on April 23 2020 for selling atchar without a permit during lockdown. Thabethe's arrest was recorded on video and circulated on social media. Despite being released from her holding cell, Thabethe still faces some backlash from her community after returning home. TimesLIVE sat down with Thabethe following the incident.

The mother was advised by the hospital that her daughter was OK and that she should rather call to check up on her condition.

"They should have called me because the link [about Covid-19 cases at the hospital] went out last night, and I wondered if I should phone them," she said.

"I called to find out how my daughter is, and they said she is OK. I hope I am leaving her in safe hands.

"I was frantic when I heard the hospital was closed. I didn't know if I should remove her and whether they would allow me to take her. However, she has a serious condition so taking her home is a big risk.

"The doctors I spoke to yesterday were very good, but I am anxious about the situation."

In a statement on Tuesday, provincial health MEC Nomagugu Simelane-Zulu said: "As a department, we are extremely concerned by these developments and have urgently exercised our constitutional obligation to prevent a further outbreak of the virus.

"What is of particular concern to us is the fact that these infections have taken place in spite of the hospital’s infection prevention and control (IPC) measures, as well as the requisite personal protective equipment (PPE) that has been made available to staff."

Scores of people waiting to receive their chronic medication from Stanger hospital, north of Durban. The hospital was closed after 16 people, including nine mothers, two babies, four doctors and one nurse, tested positive for #Covid_19SA @TimesLIVE @yasantha pic.twitter.com/kn6rZ89XZs

Simelane-Zulu said the first known Covid–19 case at the hospital involves a mother who reportedly did not disclose that her husband was one of the positive cases linked to a supermarket in Ballito.

She was housed at a boarding lodge at the hospital, where other mothers soon tested positive.

"We have instituted an urgent investigation by our communicable diseases control and IPC experts to establish, among others things, how the virus was able to spread at such a rapid rate within the hospital," said the MEC.

"All of the hospital’s laboratory-confirmed Covid–19-positive staff and patients have been isolated, and all protocols for contact mapping, tracing, testing, quarantine and isolation have been followed, in compliance with guidelines from the World Health Organisation."

The hospital, with 219 patients, has effectively been turned into a quarantine site. All staff and patients in the surgical ward and ICU have been tested.

Another mother, Zanele Nhlangothi, faced similar stress when her 16-year-old son was admitted to the hospital after he fractured his arm.

When she arrived at the hospital, it was closed and her son was in the process of being discharged.

"I found out when I got to the hospital at around 7am that there were Covid-19 cases.

"I was very worried. I called his father to come and ask that he be discharged before they transfer him to another hospital," said Nhlangothi.

The hospital said it will refer diabetic patients to other hospitals in the district.

Chronic patients are being assessed at the gate, issued with three months of medical supplies and referred to central chronic medicine dispensing and distribution sites.

After initially limiting coronavirus testing to people who had travelled overseas, displayed symptoms of the virus or been exposed to patients who ...
News
2 years ago

Police are probing how a nurse who was among a group of health-care workers tested for the coronavirus died in a toilet at Addington hospital.
News
2 years ago

How a neonatal unit gets ready to admit Covid-19 moms

Charlotte Maxeke Johannesburg Academic Hospital is blazing a trail for neonatal units during the pandemic.
News
2 years ago