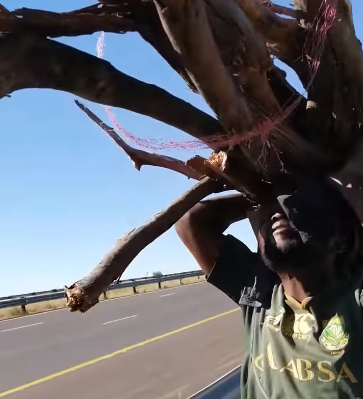 A man from Diepsloot has resorted to collecting and selling wood to survive the lockdown.
Image: Screengrab

The plight of a Diepsloot man struggling to earn an income, especially during the lockdown, has been highlighted in a video shared by SA’s “faceless” good Samaritan, BI Phakathi.

Phakathi, whose Facebook page is widely followed, bumped into the man walking on a highway while carrying a stack of wood on his head.

The wood collector identified himself as KB.

The anonymous benefactor documented their meeting on camera.

While unsure who Phakathi was, the man nervously answered questions put to him, saying he had collected wood in the veld.

He had walked a long distance to collect it, and was making the trek back to the township with the hope he would make a small income by selling it.

“All of these will be R15,” KB told Phakathi. “As long as I can go to bed with something in my stomach.”

The man said things were bad but instead of “doing crime in the township”, he had decided to try something else.

This young man was struggling to pick this wood on the road to sell, he had to stop and help him

Phakathi told KB to put the wood down. The young man, still unsure whether he was about to get into trouble for his actions, obliged.

“You do know if the authorities find you here, they could arrest you?” Phakathi said.

KB said he had no choice but to risk arrest.

“I sometimes find them here and they tell me that, but I have no choice. I am all alone in the world. I have no mother, no sister,” he said in Zulu.

“For now, there is nothing happening [because of the lockdown]. You go out and there is no work. Nothing. Even those people distributing food parcels, if you’re like me and have no ID, you’re not getting help.”

In an effort to help hard-hit South Africans, government is distributing food parcels in different areas each day.

A social grant of R350 a month has been granted for unemployed people, but an identity document is a requirement to collect the grant.

About 50,000 workers in Joburg join millions who live off food parcels. But it’s not just the poor who are queuing.
News
2 years ago

While KB told his story, Phakathi took a R100 note from his pocket and handed it to the man.

KB is thankful and decides he will ditch his wood right there. Phakathi takes out several more R100 notes and KB is grateful, saying he will be able to buy maize meal and paraffin.

After handing the man R400, Phakathi encourages KB not to discard the wood.

When Phakathi hands KB a fifth R100 note, the man questions whether the money is real.

Phakathi hands him two more notes before offering to help him lift his wood.

“I am in disbelief,” KB says, smiling, as Phakathi hands him yet another note.

Phakathi helps him reassemble the wood and hands him a final R100 note.

With R800 in his pocket and his wood on his head, KB continues on his journey.

For some of the less fortunate in SA, “Father Christmas” has been around all year, waiting to assist them with their next meal or even a few rand to ...
News
2 years ago

Phakathi has not disclosed the source of his donations, nor the identity of his funders. He does not accept interview requests.

When he is not handing out cash, Phakathi gives groceries and clothes to the poor.

In a bid to find out more about this unknown man who has touched the lives of scores of South Africans, TimesLIVE has tried to contact him but Phakathi is on a mission to keep his identity secret. He has not replied to many calls requesting an interview.

Thuli, 10, explained how she spends her days in lockdown at home in Dumbe Street, Tsakane, Ekurhuleni.
News
2 years ago