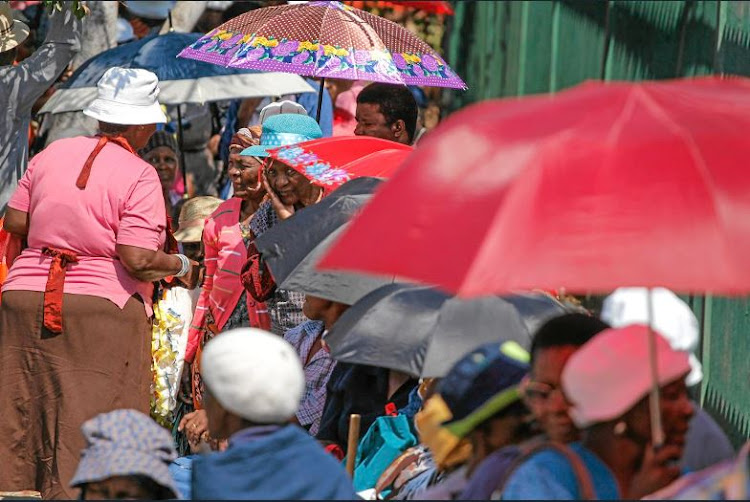 The community policing forum (CPF) in Atteridgeville said it was shaken by the death of a 91-year-old woman who was waiting to receive her Sassa grant at Atlyn mall on Monday.

Sello Ramaphakela, a member of the CPF, said the woman didn’t even get the chance to receive her grant.

“Some of our members spotted her in the line looking unwell and asked if she was fine. She told us that she had high blood pressure. She was given a chair but she later collapsed,” he said.

He said long queues for grants were a struggle, especially for older people.

Gauteng police spokesperson Capt Mavela Masondo confirmed the incident, and said there was no case opened as it was declared a natural death.

The Gauteng community safety department said it was unfortunate that the incident happened during these most difficult conditions. The department said the old woman was spotted by a patroller deployed in Atteridgeville.

Spokesperson Ofentse Morwane said more than 3,000 community patrollers had been deployed to assist during the Covid-19 lockdown to ensure compliance with the regulations and adherence to the Disaster Management Act.

“They are also tasked with helping and ensuring that the elderly, disabled and child support grant beneficiaries comply with social distancing at identified Sassa pay points, as well as at various shopping malls,” said Morwane.

As the government began the payment of “topped up” child grants on Wednesday, dozens of Soweto recipients braved long, winding queues in a bid to ...
News
2 years ago

Ramaphakela said there should at least be chairs for grant recipients because they stand for hours in long queues.

The CPF was appealing to law enforcement officials to help them in handling the situation, especially during Sassa payment days.

“We have a problem of not having police visibility. The police only come when they are here to conduct their own investigations. At least they should come and inspect, especially during the Sassa period because it gets hectic,” he said.

Ramaphakela said they felt powerless when situations got tense.

“We need law enforcement back-up, we cannot deal with this alone. It gets hectic when community members try to force themselves inside the mall,” he said.

Ramaphakela said essential-services workers were also abusing their permits to try to dodge the long queues and get ahead of community members.

“Workers who are not even employed in the mall come with their permits and want access when they want to shop, people standing in the queues complain. Some employers at the mall still haven’t issued permits to their employees and it makes our job difficult,” he said.

Ramaphakela said employers must help CPF members by helping their staff to comply with the regulations of the Disaster Management Act.

“We fight with staff members to wear the mask as they refuse to do so. Parents also keep breaking rules,” said Ramaphakela who was telling a mother that children were not allowed inside the mall.

A young girl wearing a pink jersey grabbed at the gate as she looked inside the mall in the hopes that her mother would soon appear. The young girl had been left outside with the CPF while her mother was in the mall for more than an hour. .

Sassa in KwaZulu-Natal has confirmed the payment system glitch which affected old age and disability grant beneficiaries has been resolved.
News
2 years ago