The torching of a car has raised the temperature in a row over the presence of homeless people on Cape Town's wealthy Atlantic seaboard.

The Mini Cooper belonged to Peter Wagenaar, who was criticised by some of his neighbours when he started handing out food to homeless people during the Covid-19 lockdown.

Much of the criticism was aired in the 2,600-member Atlantic Seaboard Action Group on Facebook.

In February, a member of the group was arrested for allegedly slashing his neighbour's tyres, according to police sources. A case of malicious damage to property was later provisionally struck off the roll.

When Wagenaar started handing out food in  front of his apartment building, group administrator Paul Jacobson accused him of “causing the premature deaths of many street people” by giving them food.

Jacobson also posted Wagenaar's address and ID number, as well as photographs of his car, and in another post he defended this move, saying: “If there was a situation that deserved name and shame it was this.

“[Wagenaar's] actions go against all the directives of responsible giving and also encourages others to breach isolation and lockdown. We have a real problem with this idiot.”

Wagenaar did not respond to numerous TimesLIVE calls and messages, but told IOL he believed the attack on his car was “an escalation of the backlash he had received from the community”.

He added: “We feed homeless people and there are a handful of people not happy with it and they have rallied [other] people.

“Two Fridays ago, the police asked me for my permit. We had a valid permit in place and then last night at about 3.40am I saw my car was set alight and was burnt to the ground. 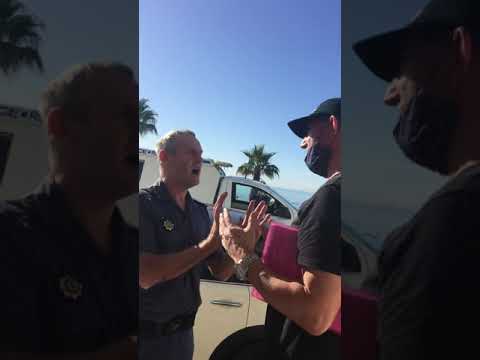 “I believe it is someone who is so toxic who wants to deter me. I am at peace. We have 200-300 supporters. There are a handful of people who have been rallying against us.”

Jacobson said he believed the arson attack was the result of a gang turf war. “What we do know is it looks like a gang-related issue, at 3 o'clock in the morning a motorbike drove up, threw a bomb in there and left,” said Jacobson. 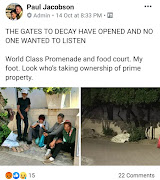 Gang bosses had started handing out food parcels in Sea Point and it was “very likely” Wagenaar’s actions had “upset some gangsters operating in that area and who utilise street people to do their business”.

Sea Point resident Shelley Finch also became a target of Jacobson and his supporters after she challenged him on another Facebook page, Sea Point Community.

She was removed by the administrator of the page after an argument about Jacobson’s attitude towards homeless people.

“I’m new to the area and I joined the local Facebook community group, and I saw that Paul was posting in the group of about 6,500 people saying you don’t feed the homeless, they must be sent to shelters. I said, I hear what you’re saying but practically that’s not working,” said Finch.

Sea Point ward councillor Nicola Jowell said members of the group had advised Jacobson to tone down his Facebook posts.

“He has been very vocal in his objection to food being handed out,” she said.