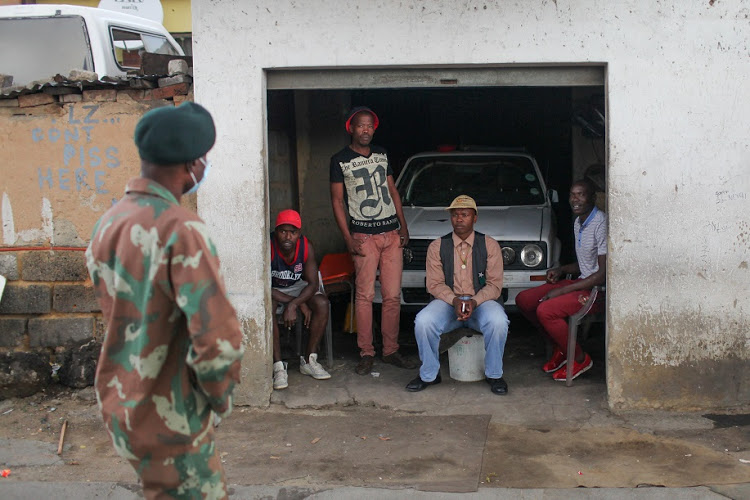 The lockdown cannot prevent further spread of the coronavirus as many people cannot socially distance, says an expert. 'We should reopen businesses as there is no health benefit from destroying the economy,' he says.
Image: Alaister Russell

The country's hard Covid-19 lockdown has “completely failed” in vulnerable densely populated urban communities, prompting concern that SA will have a “raging epidemic” by month end, experts said on Thursday.

Prof Alex van den Heever, chair of social security at the Wits School of Governance said  there was inadequate upscaling of testing and contact tracing — which was supposed to have been implemented during the first 35 days of the lockdown.

"Instead we see the epidemic trajectory rising during the 35-day period, and continuing on the same trend thereafter."

Van den Heever and Prof Shabir Madhi, an infectious diseases expert, spoke to TimesLIVE on measures needed to ensure a smooth and sustainable exit from the social and economic lockdown.

Health minister Dr Zweli Mkhize said previously the lockdown and its various new levels was a tool used to delay the peak of the virus. The country moved to lockdown level 4 from May 1 as part of a risk-based approach to deal with the coronavirus.

The country is expected to move between the different lockdown levels over the next few months based on the number of coronavirus cases seen.

Van den Heever questions if the different levels have been coherently framed, stating they do not be appear to have “been designed with clear public health objectives in mind”.

“Many of the remaining controls on economic activity are not clearly related to a public health objective. Given this, it is unclear when a movement between levels will be considered.

“The provinces outside the Western Cape do not test and trace as a health prevention strategy, and are therefore letting the epidemic spread.

“The controls on economic activity also appear not to be rationally connected to any prevention strategy and are just harming the economy without preventing the spread,” he said.

Van den Heever said the government had also failed to establish a programme of strategic testing and tracing, despite having ample time to do so.

“Most of the testing is not strategic and is just aimed at testing symptomatic cases and some of their contacts.

He said the country was behind on strategic testing and tracing and it was possible that  “we won't catch up”.

“The implication is that we will have a raging epidemic by the end of May despite the massive knock we have taken to the economy.

Testing has no bearing in terms of changing stages during lockdown. As far as I’m concerned, we should be on level 2

“We should completely reopen businesses. We are deriving no health prevention effects from the destruction of SA's economy.”

To curb the spread of the virus, a health prevention strategy is required that is not combined with the arbitrary destruction of the economy, Van den Heever said.

“Internationally this is well understood to involve strategic testing and contact tracing, in addition to social distancing, health protocols for employers and other high-risk settings, and the wearing of masks in public.

“Lockdowns in the SA context are futile and have plainly not worked. From the evidence to date, only the Western Cape government has been able to implement anything like this approach.”

Madhi said the country is ready to be on level 2 in terms of public response to measures.

“The testing itself has no bearing in terms of changing stages during lockdown. As far as I’m concerned we should be on level 2.”

Providing that people take the necessary measures like wearing masks and observing social distancing, “it makes no difference being in level 4 and 2. I don’t see why we can’t be on another level,” Madhi said.

He said there was a need to fast-track the testing.

“It takes about five to seven days for the results to come back. The numbers are not bad, it just means more people have been tested. We need to reach a stage where the results can be back in 24 hours,” Madhi added.

President Cyril Ramaphosa has reiterated that the country has to plan and be prepared for the worst of the coronavirus pandemic, which is yet to come.
Politics
2 years ago

After initially limiting coronavirus testing to people who had travelled overseas, displayed symptoms of the virus or been exposed to patients who ...
News
2 years ago

With the country on the brink of an adjusted lockdown, two local experts have proposed a model in which healthy people below 50 would basically come ...
News
2 years ago