Walkers warned to beware of muggers during three-hour exercise window 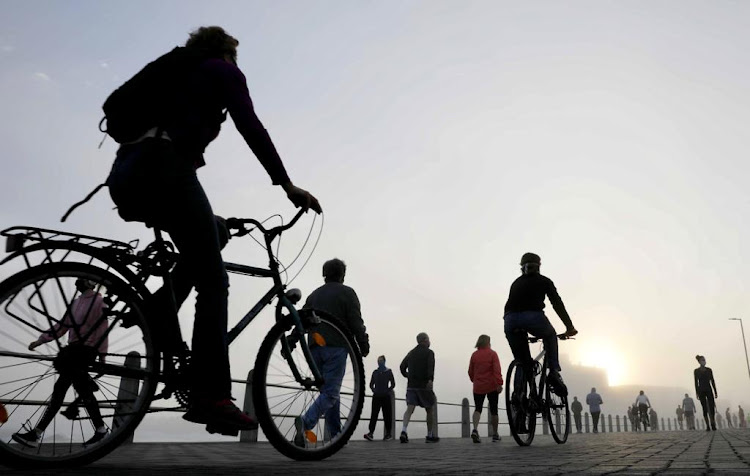 Opportunistic crimes have been reported during the lockdown, especially during the three-hour window for outdoor exercise.
Image: Sunday Times/Esa Alexander

Be careful on your morning jog or walk, security company Fidelity ADT has warned, because opportunistic cellphone muggers could pounce.

The security firm warned that opportunistic criminals could use the three-hour window for outdoor exercise to target people.

“We have received numerous reports of theft of electronic devices such as cellphones from joggers, walkers and cyclists, and even laptops and iPads through open windows or unlocked doors,” said Fidelity ADT spokesperson Charnel Hattingh.

With many families still at home, cars are parked in driveways, bicycles, toys and tools left in gardens and more doors, windows and security gates left open — all appealing to criminals.

“The best defence against burglars, opportunistic thieves or armed robbers is to make your property as unattractive to criminals as possible by implementing extra precautions to keep your belongings safe, inside and outside the home,” said Hattingh.

A reaction officer this week caught a suspect who allegedly stole two children’s bicycles out of a garage at a home in Mayberry Park, Alberton, in Gauteng.

“He was casually walking down the road ... Last week, unfortunately, we had a couple of more serious cases where cyclists were stabbed and joggers were mugged for their valuables.”

Suspected loan sharks were caught with more than 200 Sassa cards and money at a mall in Sebokeng, Gauteng, on Wednesday, the provincial department of ...
News
1 year ago

Kyle Condon, security expert and owner of D&K Management Consultants, said he has noticed a sharp increase in cybercrimes.

“There’s been an escalation in cybercrime; people have been using the Covid-19 banner to create panic. To create fictitious services on fearmongering, like selling masks and chemicals only to rip customers off. These companies ask people to use e-mail to order and then commit phishing crimes with those e-mail details.

“I also think there is going to be an increase in tender crime. It can’t be ruled out that opportunists will use the hype to say they didn’t have time to follow proper procurement processes on buying safety and hygiene supplies. Even though we are seeing less violent crime, there’s an increase in sophisticated crimes. Those that aren’t aware will become a target,” Condon said.

He added that with many people losing their jobs, CV fraud will become another point of increase in the weeks to come.

Tony Botes, national administrator for the Security Association South Africa, said it was disappointing that schools have recently become a target for crime during the lockdown.

“Since community patrol is not allowed to work during this time, criminals are flourishing. The theft, vandalism and breaking in at school infrastructures are of concern to us. The fact that there are few people on the streets has shifted crime trends to opportunistic offences,” Botes said.

‘No case numbers until after lockdown’ – cops tell woman robbed at home, before u-turn

A Cape Town woman said she was turned away at a police station after she tried to open a case of house burglary over the weekend.
News
1 year ago

Man shot dead, another injured in shoot-out in Joburg CBD

A bystander was killed and another wounded when suspected robbers opened fire on police in central Johannesburg on Wednesday afternoon.
News
1 year ago

Four people, including a supervisor at a security company, have been arrested for allegedly smuggling food parcels and mining equipment to illegal ...
News
1 year ago