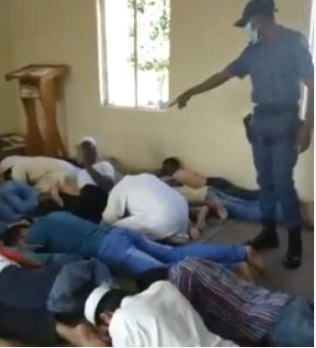 The police officer who made reference to Muhammed during the arrest of Muslim worshipers is claimed to have been referring to one of the gatherers, not the prophet Muhammad.
Image: Twitter @Abramjee

Police minister Bheki Cele said the police officer who asked Muslim worshippers in Mbuzini, Mpumalanga, whether Muhammad was bigger than President Cyril Ramaphosa was not referring to the prophet, but was referring to one of congregants with the same name.

Cele delivered this explanation during a meeting on Friday of the portfolio committee on police and select committee on security and justice.

“When the members entered the church, they were told [the congregants] had been called by Muhammad. That Muhammad was Zaphur Muhammed,” said Cele.

'You think your president is crazy?': Muslims arrested for praying under lockdown

Minister Bheki Cele warned on Sunday that police had "no choice but to enforce the law" if the lockdown regulations were flouted for religious ...
News
2 years ago

The Muhammad references were made last month and recorded on a video clip by one of the police officers who was present when the arrests were carried out. The clip soon went viral on social media. It showed police officers entering what appeared to be a mosque, where shoes had been left outside.

The officers ordered the congregants to lie down before hurling remarks, asking them whether they thought the president was crazy or whether Muhammad was bigger than Ramaphosa, who had ordered a lockdown preventing people from gathering.

Cele on Friday explained that among the 24 people who police arrested at the mosque that day, there were three men who went by the name Muhammed.

“The question that you think your Muhammed is bigger than Ramaphosa comes from those names, not from Muhammad the prophet. Those three Muhammeds were arrested,” Cele said.

The references to Muhammad caused a huge uproar with the Council of Muslim Theologians, the Jamiatul Ulama South Africa, saying although the congregants were wrong to gather, they were appalled by the conduct of the police officers, who they said should be investigated by the SA Human Rights Commission.

Police minister Bheki Cele has apologised to the Muslim community for blasphemous remarks made by officers during the arrest of Muslim worshippers ...
News
2 years ago

“The misunderstanding is that no-one knew there was a Muhammed arrested [when the video went viral] and they were referring to the Muhammed based there.”

Cele said the police officer who made the reference to Muhammed had since been cleared of wrongdoing.

"This has been checked and the member has been cleared because he did not refer to the prophet Muhammad. He referred to Muhammed who was there and alleged to have pulled everybody together," Cele said.

'I'm not sorry we arrested Muslims, I'm apologising for how it happened': Bheki Cele

Police minister Bheki Cele has moved to clarify he is not apologetic for the arrest of Muslim worshippers for flouting lockdown regulations by ...
Politics
2 years ago

Application to reopen mosques under lockdown dismissed, and it now heads to ConCourt

The high court in Pretoria on Thursday dismissed an application by an Islamic centre and two individuals who were challenging the constitutionality ...
News
2 years ago