Government in talks about possible downgrade to level 3: Bheki Cele 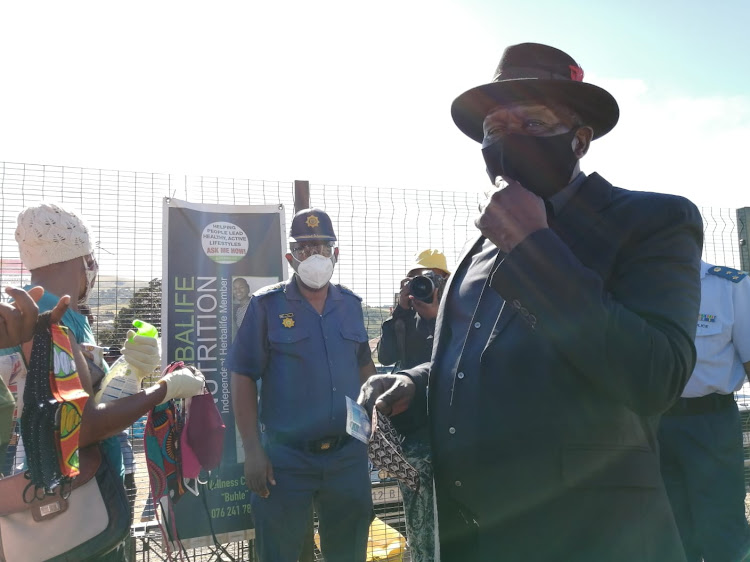 Police minister Bheki Cele buys a cloth mask from a vendor at the Kwamabulala Mall in Edenvale, just outside Pietermaritzburg, on Monday.
Image: Orrin Singh

Police minister Bheki Cele has hinted at a looming lockdown downgrade for the country from level 4 to level 3.

Cele addressed the media in Edendale, just outside Pietermartizburg,  on Monday during a visit to KwaZulu-Natal to enforce compliance in certain areas. The uMgungundlovu district has the third-highest confirmed cases of Covid-19 in KZN (63) after Ilembe (283) and eThekwini (840).

Cele revealed that the committee overseeing the regulations had been discussing level 3 and was awaiting advice from experts.

He remained mum on when the government could possibly look to easing the lockdown into level 3, which would among other things permit the sale of alcohol during specified times.

@GenBheki_Cele says government is in talks around the possible downgrade to level 3 of the #Lockdown - and with it the sale of alcohol. #Covid19inSA #AlcoholBan #CoronavirusInSA @TimesLIVE @SundayTimesZA pic.twitter.com/N9NZNNj6da

He said the Western Cape and Eastern Cape remained a cause for concern, while KZN seemed to be only starting to adhere to social distancing and other regulations.

He said of the 253 police officers arrested nationally for a range of offences during the lockdown, 183 were from the Western Cape.

Commenting on the surge of the illicit cigarette trade in SA since the lockdown commenced, Cele said illicit trading had always been there but had picked up during this period.

He said the government could not be pushed by crime to change its policies.

"What we can't do as a government, just because people are committing crime of the illicit trading, [is to] open it for that reason."

On the subject of alcohol, Cele said the police had learnt a number of things during the lockdown, none more relevant than the contribution that alcohol plays in many crimes.

Bheki Cele says police have taken lessons from #LockdownSA especially with regard to the non-sale of alcohol and an increase in police visibility, two factors he says contributed to a significant drop is all crimes across SA during this time #Covid19inSA @TimesLIVE pic.twitter.com/eFu9n5gQtL

He remained adamant that the ban on alcohol sales, coupled with increased police visibility, had drastically reduced violent crime.

He said this was a point his department would engage the government on, in attempting to reassess the Liquor Act.

"One thing as the South African police we would like to propose is to have one national Liquor Act. At present, all provinces have their different acts. For instance, you find in [some] provinces that taverns are closing at 2am and in others at 10pm. So we'd like to have one overall thing."

Cele said he would be engaging the government on various proposals, but could not divulge any information before he did so.

The Lindela Repatriation Centre is in “good standing” and the health systems inside are “quite impressive”, ANC MP and former state security minister ...
News
2 years ago

An alleged burglar got stuck in a window while attempting to break into a house in Klerksdorp, North West, on Saturday.
News
2 years ago