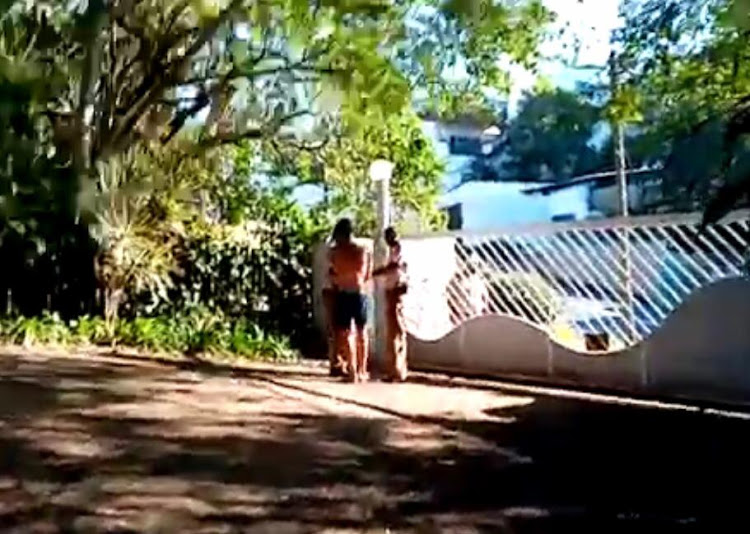 A video making the rounds on social media shows a child being forcibly removed from his father by Kwadukuza municipal peace officers. The officers then arrested the man for defying lockdown laws.
Image: Supplied

A KwaZulu-Natal father says his family has been left traumatised following an incident in which two municipal peace officers grabbed his four-year old son while trying to enforce an arrest on Sunday.

The 35-year-old father from Shaka's Rock on the province's Dolphin Coast issued a statement before speaking exclusively to TimesLIVE on Tuesday after a video of the incident went viral on social media.

The incident has prompted an internal investigation by the KwaDukuza municipality into the officers' conduct.

The father, a medical doctor whose identity has been withheld to safeguard his children, said he had been confronted by two officials on Sunday morning, shortly after returning from the beach with his children and a neighbour.

"On Sunday about 7.30am I took my two children, aged six and four, to the beach, which is about 300m from my home. I was accompanied by my neighbour and his child."

He said when they returned about 8.15am, at the top of the alley leading to the beach and about 20m from the gate of their complex, they were confronted by armed officials who said they were placing them under arrest.

"Because the children were screaming, I tried to get them into the complex before dealing with the officials. In the vicinity of the gate, one of the officials took my four-year-old son by the hand and led him away from the complex. I grabbed my son and told him to run to his sister, which he did, still screaming."

He described the incident as "extremely traumatising for everyone who was around at the point".

"My neighbour and I were then handcuffed and taken to the Umhlali police station and placed in holding cells until about 2pm."

He said a number of other people had also been arrested for being on the beach.

"During the booking process they ran out of forms and those who had not yet been charged were ordered to return later that afternoon. We were formally charged with violating the Disaster Management Regulations, and were warned to appear in court in August 2020."

Still visibly shaken by the incident, the father said that when he returned from the police station he tried to comfort his son.

"I told him the police were playing a joke on me and that it was a game, to put his mind at ease," he said.

Municipal spokesperson Sipho Mkhize said an internal investigation had been launched to uncover the facts.

"KwaDukuza municipality notes the video making rounds on social media of two of its peace officers who 'seem' to be in a scuffle with father and child in the Shaka's Rock area in Ballito.  At the outset, we want to say we do not condone any form of abuse levelled against our residents, particularly women and children," he said.

The doctor who was arrested said the municipality had arranged to interview him on Tuesday.

Ward councillor Tammy Colley said: "The DA in iLembe is outraged by a video making the rounds on social media which shows a child being manhandled by KwaDukuza municipality ‘peace officers’, and at one point being forcibly removed from his father.

"No matter what the context or what led up to this situation, it is simply unacceptable for municipal officers to behave in this matter. The DA will be writing to the municipal manager and calling for the immediate suspension of these officers pending the outcome of an investigation. We will not tolerate bullies like this roaming our streets."

A video of a father trying to prevent two KwaZulu-Natal traffic officers from removing his screaming child from a gated complex after he allegedly ...
News
2 years ago

A Cape Town man and his family were detained in Muizenberg on Monday for “taking a walk” on the beachfront.
News
2 years ago