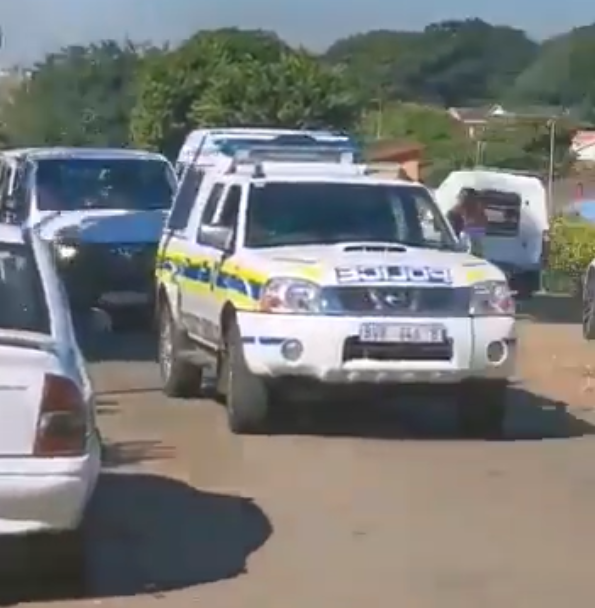 A screenshot from a video shows a police vehicle forming part of an escort for suspected drug kingpin Teddy Mafia during his arrival at his Shallcross home on Monday.
Image: Screenshot

Police in Chatsworth, south of Durban, are probing the conduct of one their officers who was filmed escorting an alleged drug dealer to his home from jail this week.

On Monday suspected drug kingpin Yaganathan Pillay, commonly known as Teddy Mafia, was released on bail and given a celebrity welcome when he arrived at his Shallcross home in a six-vehicle escort, including a police state vehicle.

In the video, Pillay is seen alighting from a white Nissan bakkie amid cheers and whistles from a group of people including friends and family, while a branded police vehicle edges its way closer towards the man filming.

A police vehicle forms part of an escort for suspected Durban drug kingpin, Yaganathan Pillay, known as #TeddyMafia. Pillay arrived at his Shallcross home on Monday after he was released from jail. Police say they are investigating a case against one of their members @TimesLIVE pic.twitter.com/jOplfOvSKI

Pillay removes his mask and is greeted by members of his family with hugs and smiles.

KwaZulu-Natal police spokesperson Brig Jay Naicker said they were investigating the matter to ensure the police member was brought to book.

“We will not tolerate such corrupt individuals within the SAPS and what we saw was quite disgusting. We will ensure that the member is dealt with quite severely.”

Naicker encouraged members of the public who witness such corrupt activities to bring them to the attention of police.

“They can load the MySAPS App on their phones so that they can report such corrupt  activities to the police anonymously.”

Pillay was arrested on April 30 during a raid at his home where police allegedly found unlicensed firearms, R700,000 cash as well as gold and silver coins with an estimated value of R250,000.

Charged with illegal possession of firearms and ammunition, Pillay was released on R5,000 bail in the Chatsworth magistrate's court and ordered to appear at the local police station twice a week.

It is understood that Devendren Lionel Pillay, 32, and Claudene Rampersad, 32, had been standing in the driveway of Rampersad's home on Alpine Drive, Shallcross, when a white Toyota Corolla, with a number of occupants, drove past and fired multiple shots - killing the pair.

A source close to the investigation said an ongoing turf war in the area had resulted in close to 10 murders within a matter of months.

KwaZulu-Natal police have arrested two men , including a controversial suspected drug kingpin, in an ongoing investigation into rival gang murders in ...
News
1 year ago

IN PICTURES | Durban cops bust suspect with R7.5m in Mandrax and heroin

The Hawks in KwaZulu-Natal and Durban metro police arrested a 52-year-old man accused of dealing and being in possession of drugs worth about R7.5m ...
News
1 year ago

A KwaZulu-Natal police officer was arrested on Tuesday night in Shallcross, south of Durban, after allegedly being found in possession of 3,061 ...
News
1 year ago