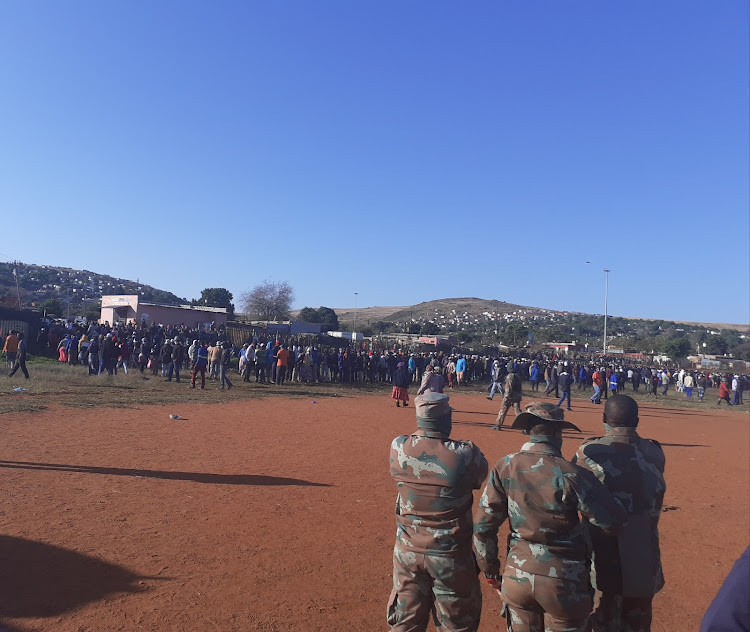 People in Jeffsville in Saulsville said they had submitted their names to community leaders for food parcels but have not received anything. They were dispersed by police and soldiers on Thursday morning while waiting for food trucks.
Image: Shonisani Tshikalange

A queue snaked around the Makhaza sports ground in Saulsville, Pretoria, through to the main road on Thursday morning as hundreds of people from Jeffsville informal settlement and neighbouring areas queued in the hope of receiving food parcels.

Some camped at the ground the whole night, while others arrived in the early hours of the morning. Mothers queued with toddlers strapped to their backs.

Their hopes of receiving food were dashed when it emerged that a delivery was not scheduled after all. The crowd was dispersed by the police and soldiers. .

Speaking to TimesLIVE, Gladys Marina said she was disappointed after waking up at 1am to queue.

The 48-year-old woman, who lives with her husband and three children, said she had enrolled with community leaders to receive food parcels.

Marina said the government was failing people who trusted and followed the orders of the lockdown.

“Our government is failing us because they said that there is Covid-19, we must sit at home and we listened, but now we are starving,” said a teary Marina.

If assistance could not be delivered, Marina said, the government should allow them to go to work.

“They should set us free then, that we go to work so that our children can get food.

“My heart is feeling pain but because we don’t have anything, we don’t know what to do. I don’t work and my husband is not working, I don’t even have a child who is getting any social grant,” she said.

Samuel Masielo said the message that food parcels were going to be distributed emerged in the community on Wednesday when some residents went to the neighbouring informal settlement near Laudium, called Itireleng. NGOs had co-ordinated a food drop there on Wednesday.

The 43-year-old man said when food ran out at Itireleng, people were told that the truck would go to the Makhaza grounds the next day.

Masielo said he started hearing people queuing from 3am.

“We want to know who is organising so that we can also get food. People are going to die from hunger,” he said.

Takalani Mkhudwane, who was able to collect a food parcel at Itireleng a day earlier, said she was queuing on Thursday to accompany her sister who is also in need of assistance.

The 26-year-old said they arrived at 6am.

“But trucks were not there, unlike yesterday. We are not OK, they said food will be here and we woke up early to come and collect and now it just chaos. We are now frustrated,” she said.

Mkhudwane said she was disappointed, especially knowing that people were starving in their shacks.

“We all want food, now police are saying that people must leave and they are busy chasing us away. Now we no longer understand what is going on. We don’t even see a sign of food trucks ever arriving, maybe the government is out of food,” she said.

Police spokesperson Col Philemon Siwele, who was on the scene with officers and soldiers to disperse the crowd, said he had no idea who told people they could collect food parcels, as there was no leader or organiser.

“We don’t know what is happening because we were told that people were gathering here and it is lockdown. We searched for the organiser — the leader — but there is no-one. Then we started to disperse the crowd because it's lockdown,” he said.

Siwele said they would monitor the situation throughout the day.

When demand for shelter for the homeless grew during the first week of lockdown, Shalene Selkirk, founding director of the Fountain for the Thirsty ...
News
1 year ago

The community of Mooiplaas and Spruit informal settlement in Centurion, north of Johannesburg, queued for kilometres on Thursday morning to receive ...
News
1 year ago