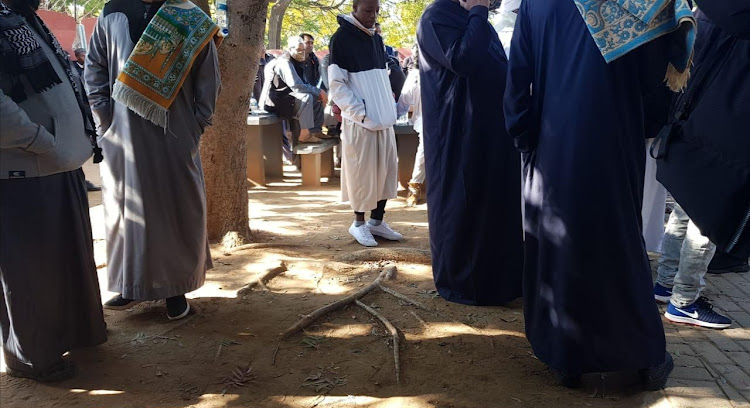 Eighty-two worshippers were apprehended by police on Monday after gathering for a prayer service in Modimolle, Limpopo.
Image: Provided

Eighty-two worshippers have been fined after gathering for a prayer service in Modimolle, Limpopo, in contravention of Covid-19 lockdown regulations

The group, who are members of the Muslim community, had been celebrating Eid.

They were arrested under disaster management regulations prohibiting gatherings of more than 50 people.

Naidoo said the group had been released after each paying a R1,500 admission of guilt fine.

Modimolle mayor Marlene van Staden said she had been dismayed by the incident.

“ [Monday] is one of the most important days in the Muslim religious calendar and I was dismayed to hear that people were arrested while they were gathered in prayer.

“While the lockdown regulations currently prohibit large gatherings, it is unfortunate that the situation led to the arrest of this religious community, who [were then placed in] even closer proximity to each other at the police station,” she said.

She urged religious communities to adhere to safety protocols.

Eid-ul-Fitr in lockdown: alone, yet sadness kept at bay by social forums

When the moon to commemorate Eid-ul-Fitr celebrations in SA wasn’t sighted on Saturday evening, the fact that fasting was mandatory for one more day ...
News
2 years ago

‘It can be done’: church leaders want to spread the gospel under level 3

More than 10 delegations met with Ramaphosa this week in a bid to persuade him to consider the reopening of churches amid the coronavirus outbreak in ...
News
2 years ago

'There were about 20 police vehicles': Gabola church leader in lockdown bust

Gabola church leader Pope Tsietsi Makiti, his wife and congregants have been arrested and fined for breaking the lockdown regulations in Gauteng.
News
2 years ago