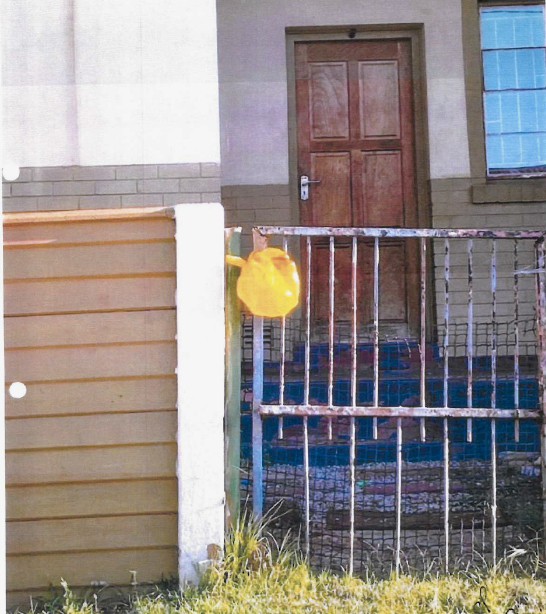 A house with a yellow “flag” put up to indicate the residents need food assistance. Photo taken from court application by Cradle of Hope.
Image: GroundUp

A free peanut butter sandwich was the sole daily meal for hundreds of Krugersdorp West residents, many of them children. But in the midst of the Covid-19 pandemic, some charities were stopped from distributing any food.

Cradle of Hope (COH) is now challenging this in an urgent application in the Pretoria high court, set down for June 2, GroundUp reported.

COH says the “guidelines” issued by the provincial ministry of social development in early May are at odds with the stated aims of the Disaster Management Act and regulations, which are not only aimed at preventing the spread of the virus but to provide rapid relief to the needy.

“The legality of these guidelines are questionable. They are also at odds with the constitution that guarantees the right to sufficient food and water. The distribution of food must be done within the framework of the regulations, but cannot be made subject to bureaucratic and inconsistent measures,” COH founder and CEO Melodie van Brakel says in her affidavit lodged with the court.

“I was utterly distraught,” she says, after being told by a senior official in the department that the distribution of sandwiches was not permitted.

It is becoming clear the Solidarity Fund's food parcel distribution programme is no longer sustainable, with a feeding strategy rethink needed as ...
News
1 year ago

COH, which has also been involved in providing shelters for homeless people and a “House of Restoration” for vulnerable women and children, started the peanut butter sarmie scheme as a response to hungry children stopping by its premises on the way home from school.

It started off with 15 loaves of bread a day. Within three months, that increased to 80 loaves a day. For three years, hundreds of people have received the sandwiches every day, with very few exceptions.

When the lockdown was announced, Van Brakel issued emergency worker permits to all workers and volunteers. All health measures, including social distancing and sanitising were adhered to, and the feeding station was signed off as being Covid-19 compliant by the local health department.

Residents also began using the “yellow for hope” initiative - putting yellow displays on their doors and fences as a sign that they needed help.

A queue snaked around the Makhaza sports ground in Saulsville, Pretoria, through to the main road on Thursday morning as hundreds of people from ...
News
1 year ago

Van Brakel said in early May a newspaper article made reference to “new requirements” for food distribution, indicating that a permit was required at least 48 hours in advance.

“At that stage I believed it was only for food parcels. I prepared eight applications for eight days, which were granted,” she said.

But the queues for the sandwiches were getting longer. Concerned for the safety of the children, she used red plastic cones to partially barricade the street.

“I was reprimanded by metro police. I explained that I was worried about children being run over. To my shock he said, ‘That is not my problem.’”

She attempted to get guidance from the department of social development. She was told the distribution of sandwiches was not allowed.

“The next day [May 12] I put up a red sign informing the community of this. I noticed a police van parked off opposite our premises. I found this extremely intimidating and a sign that I could be arrested,” she said.

When she applied again for food parcel delivery permits, “I didn’t even get the courtesy of a response”.

“It has come to my attention that others in the province, and beyond, have been left discouraged and fearful for providing food to the needy and some have ceased doing so for fear of arrest or other arbitrary sanctions being imposed,” said Van Brakel.

“The need among the poor has grown … and continues to increase daily. As opposed to joining hands with civil society and NGOs, these guidelines are hampering rapid relief,” she said.

The government has until later this week to respond to the application.

When demand for shelter for the homeless grew during the first week of lockdown, Shalene Selkirk, founding director of the Fountain for the Thirsty ...
News
1 year ago