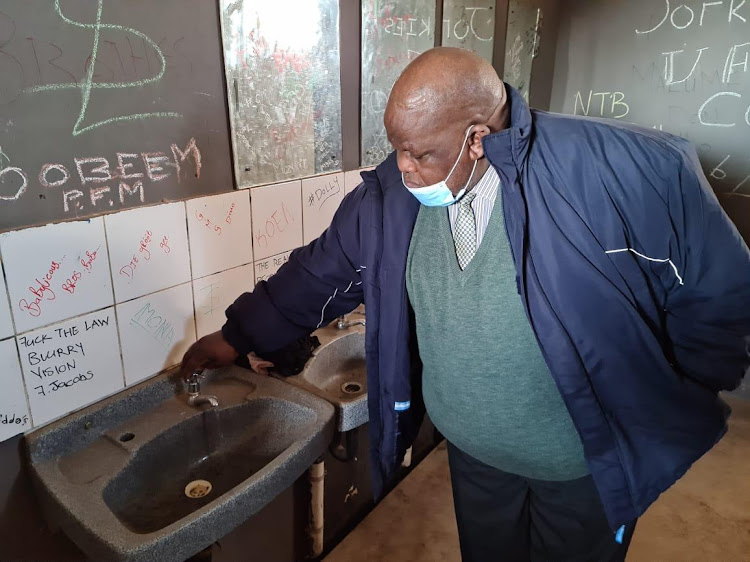 Education officials have been visiting schools throughout the country to access their readiness to receive teachers.
Image: supplied

Five teachers' unions in KwaZulu-Natal have advised teachers not to report to schools on Thursday due to lack of readiness under the Covid-19 protocols.

“We advise our members in the province not to report to schools on May 28 because schools are not ready to receive them under the Covid-19 protocols. We must be consistent, education in this province will commence when all schools are ready to receive learners and teachers safely,” the unions said.

“We call on the employer to work closely with us as unions so that we devise a comprehensive plan together — an exercise that will require two to three weeks of uninterrupted work. This critical time cannot afford deficit in leadership of all parties involved in education delivery. As unions we shall continue to provide leadership for our members and the public.”

The KwaZulu-Natal education department will deploy 6,000 people to screen teachers and pupils at schools in the province from June 1
News
1 year ago

Premier Sihle Zikalala announced on Sunday that the province's 90,057 teachers and support staff, who were expected to report back to school on Monday, would now only return on Thursday citing the non-readiness of schools.

Naptosa provincial CEO Thirona Moodley confirmed to TimesLIVE on Wednesday that the statement — the first joint statement from five unions in the province — was legitimate and that all listed unions were on board with the advice to teachers to stay away from schools.

According to the unions, it had received information that most schools were not adequately equipped for the safe return of teachers.

“To ascertain that the workplace is conducive to receive education workers, as unions we collected information across the province as evidence of the true yet disturbing state of affairs in our schools,” they said.

“Information gathered paints a horribly bleak picture in that, contrary to claims made by the department, many schools have not been provided with adequate PPEs in relation to school populace.”

The unions claimed that the 13 schools that were visited by KwaZulu-Natal education MEC Kwazi Mshengu on Wednesday “were given almost everything”.

“This is very unfortunate as we observe that some are using our schools to popularise themselves more than improving the condition of our schools. All schools, save a pocket of five in some district which the MEC visited, have no hand-washing basins installed. Few water tanks delivered in the poor and rural schools were not installed for use hence no water could be loaded,” they said.

Basic education minister Angie Motshekga has once again defended her department's decision to reopen schools from June 1.
Politics
1 year ago

“Some thermometers delivered are of poor quality and cannot be utilised as they do not have batteries. In our statement on Sunday we said the department needed to do an audit of what has been received and what is given to schools. As this has not been done some districts got more than they expected.

“There is no uniformity and no explanation about what is given to schools. This represents the disdain with which the department has elected to treat some of our schools. We as unions shall not allow perpetration of inequalities that have painfully characterised our schooling system for years.

“The lives of education workers and learners remain more important than the need to save an academic year. Other community leaders demand an assurance from school principals that their children will not be infected as they are currently Covid-negative.

“These are challenges that teachers are faced with and the department has received a correspondence from school governing bodies that they are not opening schools. What should the workers in these schools do?”

The unions said the department had issued “vague circulars” that have caused confusion and left employees with more questions than answers.

“The unions, whose members are at the different sites, reported the scenario to be very different. The unions in this province can only conclude that the employer is being misinformed as to the state of readiness of this province.”

The unions also claimed that there was confusion “over school-based screeners” and that principals were under immense pressure to pick up chemicals in quantities they are legally not authorised to transport.

“Principals are expected to oversee the deep cleaning, fumigation and/or disinfecting of schools. The health and lives of our principals are not being respected. Principals are being harassed and intimidated by circuit managers to comply with unreasonable instructions. This is unacceptable and a violation of their labour rights.

KwaZulu-Natal departmental spokesperson Muzi Mahlambi said: “We note the joint statement by unions. We are aware of some of the gaps in some areas, but generally we are happy with the progress that we have made and [it] gives us confidence that many of our schools will be ready to operate as from tomorrow, May 28.”

The Educators Union of South Africa (Eusa) is planning to approach the courts on Friday for an interdict against government's plan to partially open ...
News
1 year ago

Criminals have hit at least three more schools in the country, stealing personal protective equipment (PPE) meant to ensure the safety of teachers, ...
News
1 year ago

The Eastern Cape education department is scrambling to hire 800 unemployed people to help in the first phase of schools reopening next week. These ...
News
1 year ago