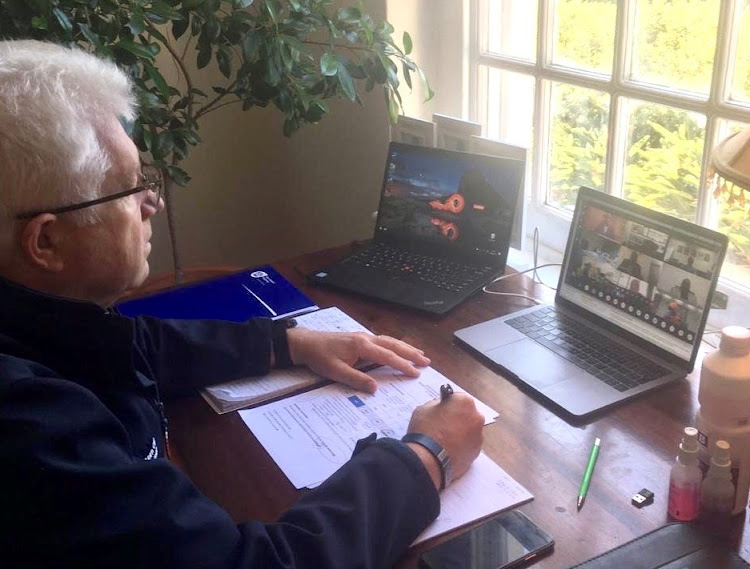 Western Cape premier Alan Winde working from his home. On Wednesday he issued a press release confirming that Covid-19 deaths in the province had risen to 387.
Image: Twitter/Alan Winde

Covid-19 deaths in the Western Cape, South Africa’s most infected province, reached 387 on Wednesday after 30 more people died in the last 24 hours.

The total cases in the province increased to 16,551 - an increase of 795 cases since Tuesday.

According to Western Cape premier Alan Winde, 8,504 people have recovered while 7,660 cases remain active - a steady increase since Tuesday’s total of 7,555.

Winde said 660 patients were in hospitals around the province - 182 in ICU or high care wards. He expressed his condolences to the families of the deceased.

The Cape Town metro bore the brunt of infections, with the city’s central, high-density residential subdistricts of Tygerberg (including suburbs like Goodwood and Bellville), Khayelitsha and Klipfontein (which includes suburbs like Athlone and Manenberg) reporting the largest numbers of infections.

A shortage of specialised nurses has meant that Tygerberg Hospital in Cape Town is only able to run 25 of its 42 ICU beds, while a shortage of ...
News
2 years ago

Winde thanked Old Mutual and said the facility will be part of the 3,500 quarantine and isolation beds that are in the process of being brought online in the province.

Old Mutual has made a 300-bed isolation and quarantine facility available to help the Western Cape #StopTheSpread of COVID-19. Thank you!👏👌🇿🇦 See photos in the comments below. #ShareTheLove💕

Posted by Western Cape Government on Wednesday, 27 May 2020

As the Western Cape moves closer to the peak of the pandemic, the need for quarantine beds is expected to increase drastically. Winde said there are plans for several thousand more beds in the pipeline.

“Facilities such as these are important in the response to Covid-19 as they allow for people who don’t need medical treatment but do not have the space or the means to self-isolate and quarantine at home to do so in a space that is safe and comfortable,” he said.

“Isolation and quarantine facilities are just one aspect of our health system's preparedness, as the province has also started work on temporary hospital facilities such as the CTICC [Cape Town International Convention Centre] and built 19 testing and triage centres at hospital across the province.

“We have put out a call for volunteers with medical experience and have placed orders for necessary medical equipment, including PPE and ventilators.”

Winde expressed relief at clarity given by health minister Zweli Mkhize on Wednesday when he said Mkhize confirmed that lockdown regulations would be relaxed across the entire country from Monday June 1.

He said the move to level 3 from alert level 4 would allow more people employed in industries banned or limited from operating under level 4 restrictions to return to work and to provide food for their families.

He said although it would ease the humanitarian relief burden on the government, vigilance would be required by the public to prevent the spread of Covid-19.

The Covid-19 death toll in the Western Cape reached 357 on Tuesday after the province recorded another 39 deaths since Monday.
News
2 years ago

The Western Cape has sounded the alarm about the provincial backlog of 18,000 Covid-19 test results.
News
2 years ago

Hotspots to be micromanaged to curb Covid-19: Zweli Mkhize

Teams of experts will work in hotspots, concentrating on a very small catchment area, while caring for the health of people in these districts, as ...
News
2 years ago