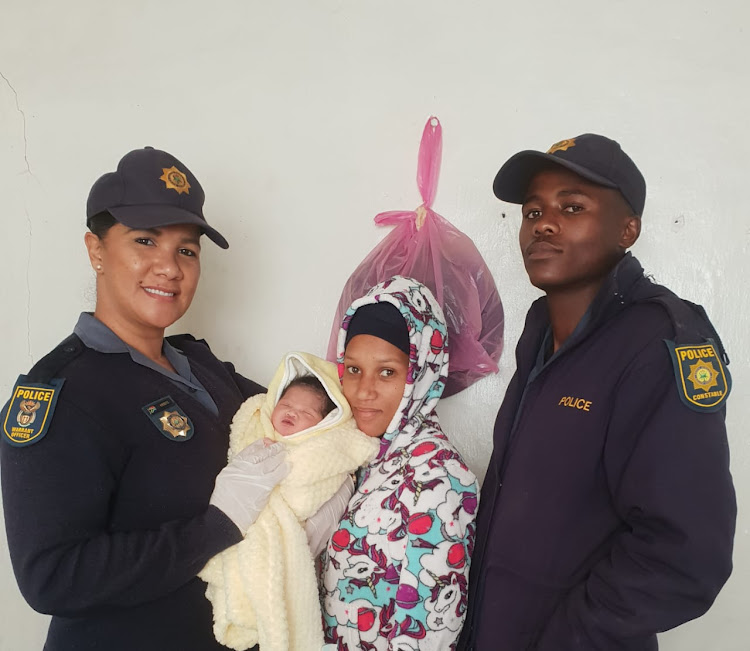 Warrant Officer Heidi Kroutz and Const Goodwill Brandt helped a 22-year-old mother bring a beautiful baby girl into the world on a farm in the Eastern Cape.
Image: Supplied/SAPS

Warrant Officer Heidi Kroutz and Const Goodwill Brandt reached the farm where a 22-year-old expectant mother was in distress and immediately realised that this baby was not waiting for an ambulance to arrive.

"The contractions were severe and having been a mother herself, Kroutz knew it was time for delivery," said police spokesperson Col Sibongile Soci.

Kroutz and Brandt, from Baviaanskloof in the Eastern Cape, have been lauded for their efforts after unexpectedly having to help deliver the baby girl on Wednesday.

Kroutz, knowing that Damesdrift farm was in a rural area and the ambulance would take time to get there, decided to personally head out there with Brandt.

For Reuters photographer Hannah McKay, a recent trip to take pictures at a hospital in northern England required the kind of planning more typical of ...
News
1 year ago

"On arrival at the house, she found the heavily pregnant woman on the bed writhing in pain and another older lady sitting on another bed. She examined the pregnant woman and found that she was in advanced labour. She knew that had to prepare herself to deliver the baby, who was ready to enter the world not a minute later," said Soci.

"Kroutz managed to calm the woman and guided her through every step of the delivery while encouraging her.

"Tiny screams were heard just as the paramedics arrived."

Mom and baby were taken to hospital and discharged the next day.

"They sacrificed their time and didn’t think of themselves. Instead they put the welfare of others before their own. Their actions are commendable and I am proud and honoured to have such dedicated members in this province ... These young officers maintained a calm composure and helped bring a beautiful child into the world," said Ntshinga.

'Hospital starved me for three days': pregnant patient who was 'accused' of having Covid-19

A heavily pregnant Soweto woman relived her "nightmare" at a local hospital where she says she was treated with disdain and denied food for three ...
News
1 year ago

Two men were due to appear in the Kimberley magistrate's court on Thursday after being arrested for selling a fake licence disc to undercover police.
News
1 year ago